Perhaps considered a somewhat nondescript site by those passengers which use its platforms day in, day out, Deptford station is of considerable importance in terms of London’s railway history. London Bridge is indeed regarded as the doyen of the capital’s termini (even though some quizmasters still give this honour to Euston!), but it is by no means the oldest station in the vicinity. The very first passenger stations were in fact Spa Road and Deptford, which came into use on the first section of the London & Greenwich Railway’s elevated line on 8th February 1836. Of course, both subsequently became through affairs (more of later), and Spa Road was even re-sited, before seeing closure under SE&CR auspices. London Bridge opened on a westward extension from Spa Road on 14th December 1836, but the complexity of bridging Deptford Creek in the east severely delayed the prospect of running to Greenwich. Had this not been the case, the latter would more than likely have become the main base for the railway company’s stock and works. Consequently, the L&GR established workshops, covered rolling stock accommodation, and an engine shed at then end of the line, Deptford, and such facilities were retained here even after the opening of the Greenwich extension on 24th December 1838.

When the line first opened, the approach to the concept of keeping carriage stock under cover was in fact quite novel, for much of it was stored within the arches of the viaduct. Such items were raised and lowered on a viaduct ramp, roughly 45-degrees to the running lines, by means of a pulley system. At least the arches were being put to some use; in addition to supporting the line, the railway company also envisaged renting out such spaces for commercial use, but with the prices charged being deemed by businesses as too expensive, combined with the comparative dampness of the areas, several remained vacant. This ramp is, quite amazingly, still in existence today, protected by listed status.

At midnight, New Year's Eve 1844, the SER formally took over the Greenwich operation, leasing the line for £45,000 per annum. The company had assumed control of an interesting arrangement at Deptford. All of the L&GR’s main facilities – locomotive and rolling stock workshops, engine shed, and carriage shed – were situated behind the ‘’up’’ platform. The station was not without elaboration either, for the L&GR had taken the opportunity to install an intricate cylindrical tower on the ‘’up’’ side, on the corner of the high street.

The SER wasted no time in degrading Deptford’s status, and by 1847, Ashford had – unsurprisingly – taken over all matters relating to locomotive and rolling stock maintenance. Indeed, the station resided on a rather isolated appendix off the expanding SER network, and despite the emergence of the North Kent Line in 1849, the original Greenwich branch did not become a thoroughfare until 1878. Of course, the Royal Observatory had hindered this process, astronomy taking precedence over railway operations. However, it would also appear to be during 1878 that rather than a loss, Deptford made a gain, albeit an economical one: the SER erected one of its trademark single-storey clapboard buildings on the ‘’down’’ platform. A feature which did survive the SER culls of the 1840s was the engine shed. When absorbed into the SER system, it became sub to the large complex at Bricklayers Arms. Accompanied by a turntable and carriage shed from the outset, its retention was no doubt helped by the fact that it was situated on a short terminating line – no such facilities had been incorporated into the station at Greenwich, either. With the opening of the North Kent Line in 1849, it was joined under the Bricklayers Arms wing by the motive power depot at Woolwich Arsenal.

In its earliest years, the joint managing committee of the SE&CR endeavoured to improve commuter services to and from the capital. This saw the emergence of a small number of large motive power depots to replace smaller sheds opened by the erstwhile separate SER and LC&DR. Slade Green shed was one of these, coming into use in October 1899 (although, admittedly, it was an undertaking instigated by the SER). This large depot, situated out on the bleak Erith marshes, would eventually take over the functions of both Deptford and Woolwich sheds. Both sites’ depots closed in 1904 and 1905 respectively, which coincided with structural rebuilding at the two stations. The revisions at Deptford appear to have included the demolition of the attractive L&GR cylindrical tower of 1842, and the erection of then new yellow brick pitched-roof offices behind the ‘’up’’ platform. Of considerable interest, however, is the fact that the original L&GR doorway entrance on the ‘’up’’ side, at street level, was retained.

It was under the SE&CR that London’s oldest stations – at least in name – were closed, both Deptford and Spa Road (the latter of which had been re-sited in 1842) seeing their last services on 15th March 1915. The pair’s decommissioning was a resultant of the general economies and cutbacks made during World War I. For Spa Road & Bermondsey, as it was then called, it marked the end, but for Deptford there was light at the end of the tunnel. On 19th July 1926, the Southern Railway reopened the platforms – L&GR, SER, and SE&CR architecture still being in existence – and then new upward-slanting platform canopies were installed for the station’s new lease of life. The line through the general suburb of Deptford was not without incident during the SR’s tenure: on 19th October 1940, the route received considerable bomb damage during a night air raid.

The platforms have been extended a number of times over the period of more than one and a half centuries, to reach their present 800-foot length. It was the SER which lengthened such surfaces eastwards, over the road, and the later abolition of the locomotive and carriage depots, in addition to the works buildings, permitted further platform extension in the London direction, on the ‘’up’’ side. Indeed, as far as the trio of North Kent routes are concerned, arguably the most well known instances of platform lengthening was that undertaken during the 1954 to 1957 period, to accommodate ten-vehicle EPB formations then being introduced. This was then followed a fair while later, in 1992, by further increases in platform length in connection with the ill-fated twelve-vehicle ‘’Networker’’ scheme. It is worth noting that Deptford’s platforms are partially staggered, and the 1992 modifications mentioned affected the western and eastern ends of the ‘’down’’ and ‘’up’’ surfaces respectively. Four years earlier, there had also been some structural alterations. The SER clapboard structure on the ‘’down’’ side was obliterated, as were many others along the North Kent routes during this period, and the platform canopy on this side was also truncated in length by two fifths. Since, there have also been further curious alterations: formerly, the section of the ‘’up’’ platform which passes over the high street, was lined at its rear by clapboard backing. This was subsequently replaced with glazing, providing passengers with a view down at the parade of shops. The aluminium window frames did, however, sit uncomfortably alongside the more traditional-looking canopies. 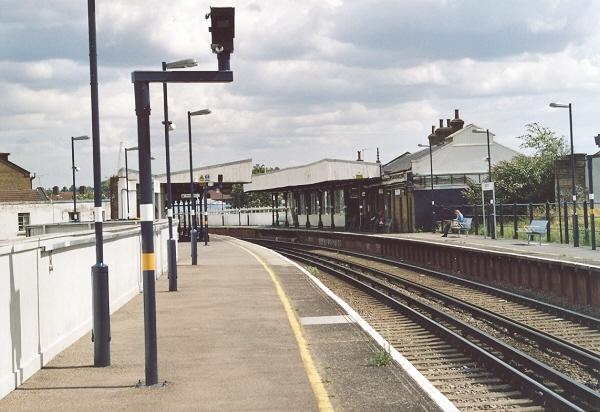 An eastward view from 2nd August 2006 reveals the remaining SR platform canopies. On the

right is the ''up'' side yellow brick pitched-roof station building of the SE&CR. In front of the

latter, on the far right, can be seen an undeveloped grassed area: this marks the former site

of the L&GR's works and locomotive depot. © David Glasspool 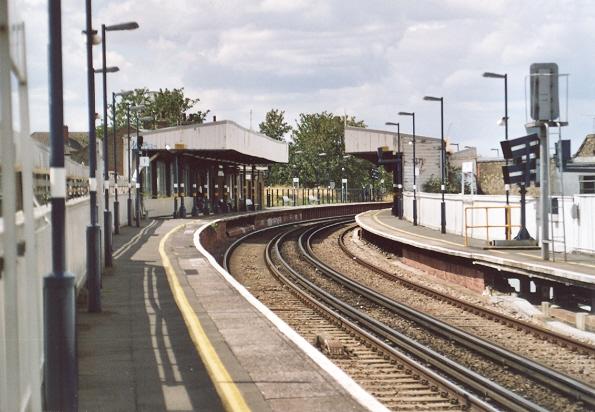 A westward view on 2nd August 2006 reveals a quite severe curvature through the platforms.

The glazed ''up'' side platform backing, mentioned in the main text, can just be deciphered under

the nearest portion of the platform canopy on our left. © David Glasspool 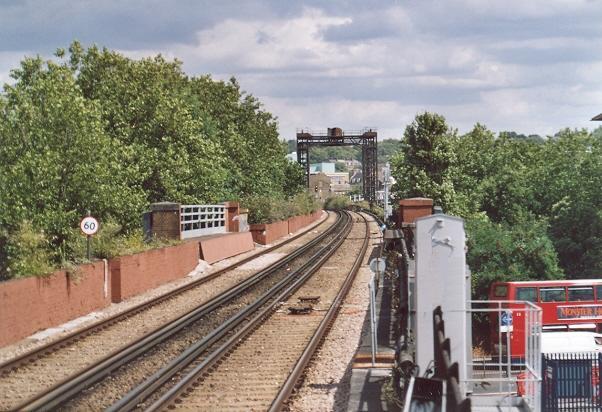 over Deptford Creek, which celebrated its 40th birthday in 2003. Barges coming through at high

tide would have to book a time slot in advance for the bridge to open. © David Glasspool