The ''Charing Cross Railway Company’’, a nominally independent concern instigated by the SER, was formed by an Act of Parliament in 1859. The company’s purpose was to extend the existing London & Greenwich Railway metals beyond London Bridge, to eventually arrive at a new terminus in the West End. This involved forming a 1⅓ mile track bed upon brick arches to carry the line through the densely-populated Borough of Southwark, before arriving at a lattice girder bridge to carry the tracks over the Thames. Construction began in the year of the Act, but trouble was already afoot for the SER. In 1860, the Metropolitan Extension Act was created, which enabled the rival LC&DR to reach the City of London. Hitherto, the LC&DR had been running to Victoria by means of the ‘’West End of London & Crystal Palace Railway’s’’ (WEL&CPR) metals between Beckenham and Battersea, via Crystal Palace and Balham. The WEL&CPR became part of the LB&SCR in 1860, a company which the LC&DR had already entered into controversy with; this concerned the sharing of the terminus at Victoria. Consequently, the aforementioned Act of 1860 not only enabled the LC&DR to construct a spur to the City, but it also permitted a completely new line between Beckenham and Battersea, allowing the company to avoid the metals of the LB&SCR. In response to the LC&DR’s City endeavours, Parliament passed a separate Act in 1861 after lobbying by the SER, which allowed the construction of a northern appendix to the westward extension from London Bridge. This would be about ⅓ mile in length, and connect with the London Bridge to Charing Cross route by means of a triangular junction; the SER would now be placed firmly in the City, the capital’s financial headquarters.

Construction of the £4 million Charing Cross extension had begun in 1859, the year in which the Act of Parliament received Royal Assent, but building of the City appendix did not commence until the summer of 1863. After extensive building works and the excavation of 7000 corpses (these subsequently being reburied at Brookwood), scheduled services from Hayes and Greenwich (both at the end of terminating branch lines) began running to Charing Cross on 11th January 1864, followed by North Kent and Medway Valley Line services on 1st April, and Tonbridge and Kent Coast trains on 1st May. The SER’s City terminus site, bordered at its north by Cannon Street, was far from complete, and it would be over two and a half years later until this was commissioned. To span the width of the Thames between Southwark and the City, a 706-foot long iron girder bridge was erected on a series of cast-iron columns, these in turn being built upon brick and concrete bases. The bridge was designed to carry five parallel lines; on the immediate approach to the station, a further four tracks were spouted, and in total, eight platform faces were to be in use. Of the nine tracks, one was to be used for carriage berthing – this lacking any passenger access – and the longest platform faces would measure some 721-feet. The SER commissioned ‘’Cannon Street’’ station for passenger use on 1st September 1866, and without doubt, the entire layout was far more impressive than the efforts of the LC&DR, which had established itself half a mile to the west. A semi-circular-shaped curved overall roof, measuring 680-foot by 190-foot, graced the platforms, this being constituted of a 1000 ton iron framework. Two thirds of the frame’s three acre surface area was glazed. The huge trainshed, which was an enlarged (and, as was later discovered, more robustly built) version of the example which had appeared at Charing Cross, was held up on either side by huge yellow-brick walls. Both trainsheds were products of civil engineer John Hawkshaw. The station’s side walls, some 6½ feet in width, terminated at their respective southern ends in the form of a huge tower, each rising up to 106½-feet above rail level and providing the Thames-facing façade with a spectacular symmetrical appearance. The fact that the station had to be elevated, to reach the level of the incoming tracks, ensured that a huge storage basement, formed of numerous arches, was created underneath the platforms. This was reached by a series of hydraulically-operated lifts, which used water from tanks in the towers as power. These tanks also supplied water for locomotives.

As per Charing Cross, an initially separate commercial entity backed onto the rear of the station, providing a spectacular street-facing façade. This was the City Terminus Hotel, a five-storey masterpiece worthy of Hawkshaw’s station. It was based on the same French Renaissance style employed at the Charing Cross Hotel, and the structures at both termini were designed by architect Edward Middleton Barry. The City Terminus Hotel opened later than the station it served, the first customers using it in May 1867. To coincide with the station’s construction, the opportunity was taken to insert a tunnel underneath the site of the hotel forecourt, for the impending District Railway underground line.

The layout of the entire appendix from the original Charing Cross extension had been geared primarily for a timetable which saw all services to and from the West End terminus call at Cannon Street. Unfortunately, however, the track arrangement derived from such an operating principle would cause congestion chaos in future years, particularly after the discontinuing of the Cannon Street stop. As mentioned earlier, a triangular junction linked the Cannon Street spur with that between Charing Cross and London Bridge. On eastern and western sides of the triangle were three tracks, whilst the southern end of the triangle – destined to become the busiest section of them all – was just double-track. This arrangement south of the Thames was eventually controlled by three signal cabins: Borough Market Junction, Metropolitan Junction, and Cannon Street (No. 2). The station at Cannon Street itself was controlled by a 62-foot long signal cabin which, like the example at Charing Cross, was suspended across the tracks on a lattice girder framework, beyond the platform ends. This had been erected by contractor Saxby & Farmer, a company which is perhaps better known for undertaking signalling projects for the rival LC&DR. The very practice of reversing Charing Cross services into Cannon Street also called for an engine shed to be erected on the southern bank of the Thames. This was positioned immediately east of the Cannon Street approach lines, beside the diverging tracks which formed the east and west sides of the triangular junction. The shed was of a terminating arrangement, featuring five southward-facing tracks (each approximately 125-feet long), which were all fed by a turntable. The cramped nature of the site meant that locomotives would approach the turntable from the north, then after rotation, double-back on themselves to enter the shed. 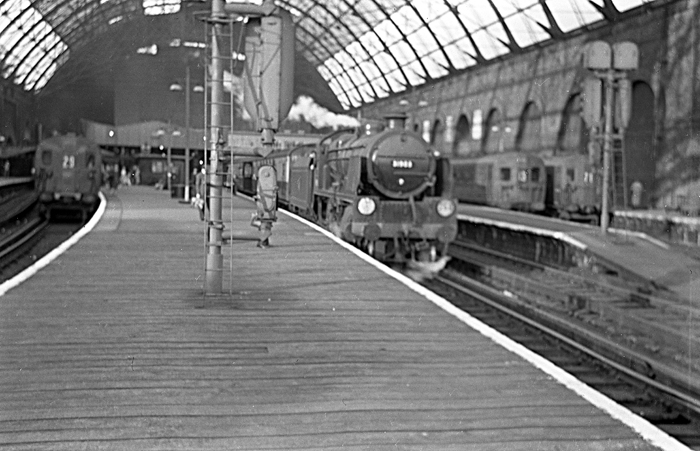 The once lofty environs of Cannon Street can be appreciated in this view, which includes the framework of the trainshed supported upon huge walls. The platform canopies in the background protected passengers from the elements, given that the roof had lacked glass since World War II bombing raids. The platform lighting was of the concrete bracket type. An N1 Class 2-6-0 is seen at the head of Blood and Custard Maunsell stock, either Ramsgate or Dover-bound, which will be routed via Chislehurst Junction, Gillingham, and Faversham. The EPB on the left is on a Selsdon or Sanderstead working, the 4 SUB on the right is forming an Orpington service, whilst the EPB on the far right is for Dartford via Bexleyheath. Note that the platform is timber planked as it extends onto the railway bridge. © David Glasspool Collection 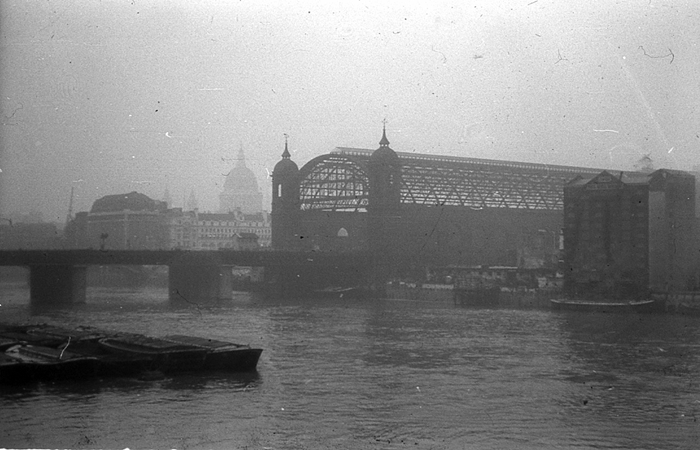 The station is seen immediately before dismantling of the splendid trainshed commenced, which unfortunately had been bomb damaged during World War II. The signal box, which can be seen on the bridge, to the left of the furthest tower, was once double its length. A fire in the relay room earlier in the year was severe to the extent that half of the signal box was demolished and a replacement lever frame installed. The latter had been supplied by the Midland Region. © David Glasspool Collection 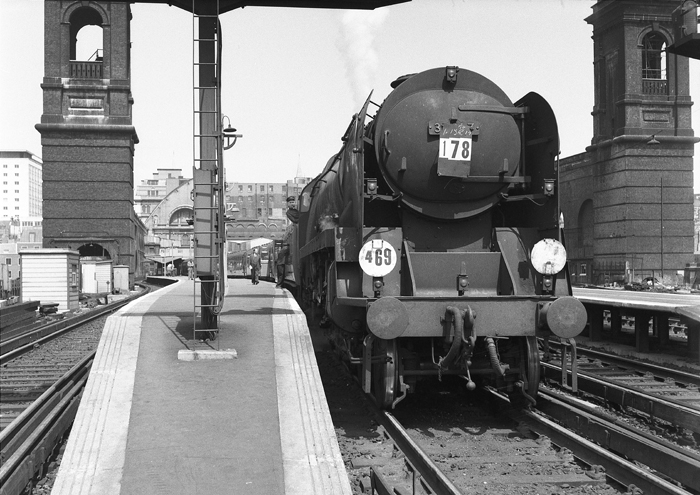 The absence of the train shed is obvious in this view, which shows West Country Class No. 34037 "Clovelly" at the head of a train bound for Ramsgate via the Chislehurst Loop and Chatham. Dismantling of Hawkshaw's gigantic ironwork had been completed earlier that year and steam was not long for the "Chatham" line either; the full accelerated electric timetable came into force two days after this photograph was taken. In the background can be seen the rear of the once opulent hotel, which subsequently became "Southern House" and was eventually demolished in 1963. A Ramsgate engine, No. 34037 transferred to the South Western Division after electrification of the Kent Coast, remaining in service until the end of steam traction on the Southern Region in July 1967. A. Jackson © David Glasspool Collection 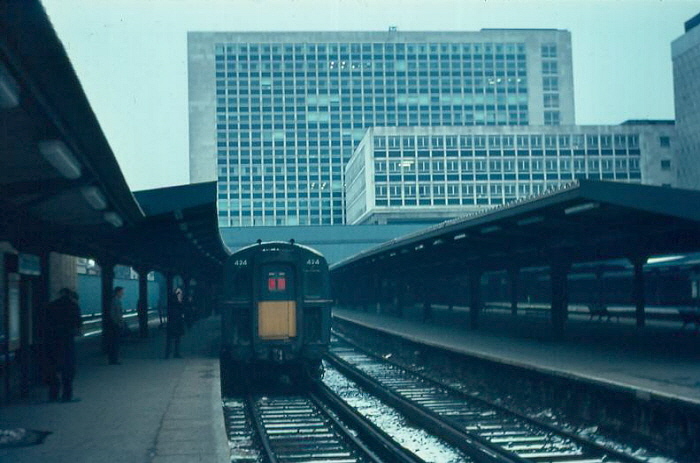 The terminus is seen two years after the completion of its first major rebuild, on a gloomy December's day. Visiting from the South Western Division was 4TC (later Class 438) No. 424, wearing all-over BR Blue with small yellow warning panel and aluminium BR ''Arrows of Indecision'' on the cab sides. The set had been hauled into Cannon Street by Electro-Diesel No. E6018, and the train had originated from Bromley North. This was just one of the routes travelled by the formation on this day, as part of a tour for the Locomotive Club of Great Britain (LCGB). From Cannon Street, the train travelled to Ludgate Hill, and then on to Victoria, this time being hauled by D6584 (later Class 33 No. 33064). In this view can clearly be seen the V-shaped canopies erected to provide protection from the elements, after the graceful overall roof lost its glazing. Notice on the far left that the original station wall has been partially demolished, and replaced by a metal barrier. In the background can be seen the flat concrete slab that was laid over the concourse during the rebuilding works, whilst above and behind are the soulless office blocks which replaced the former elegant - but bomb damaged - City Terminus Hotel. © David Glasspool Collection 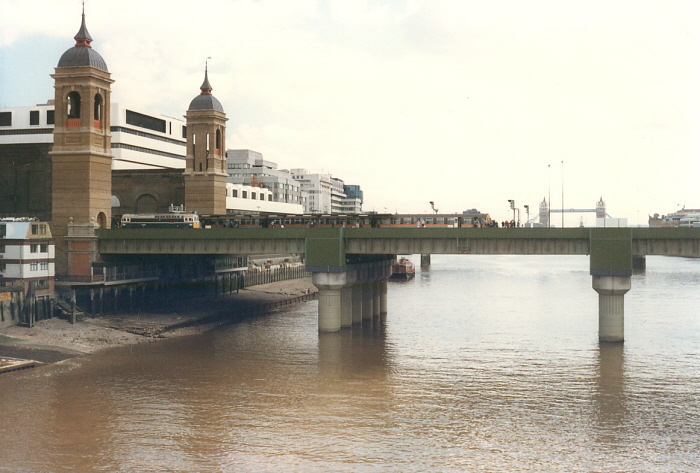 Rebuilding of the railway bridge was undertaken between 1979 and 1982 inclusive, and the result was the rather austere arrangement seen in the above view. Positioned immediately to the right of the nearest tower is Class 33 No. 33008 ''Eastleigh'', wearing 1960s BR green, but with large yellow warning panels. ''Jaffa Cake'' 4 Cep No. 1529 stands prominent over the bridge. These items of rolling stock formed part of an interesting line-up at the London & Greenwich Railway's 150th Anniversary celebrations at Cannon Street, over the weekend of 23rd and 24th of August. © Mike Glasspool