The East Kent Railway's first operational section of line between Faversham and Chatham commenced operation on 25th January 1858, but at this time no station was provided at Newington, it only being a very small community. A station was eventually built here, however, some four and a half years later, opening on 1st August 1862. Although a LC&DR station, its belated opening saw it constructed in a style very untypical of the company, being incongruous with those familiar two-storey Station Master's house / ticket office combinations found further along the line in either direction. Two platforms were situated either side of the double track and no footbridge was in evidence from the outset, a track-level crossing instead being used for about three decades. The main station building was located on the ''up'' side and although of brick construction, was merely single-storey - it did, however, demonstrate a symmetrical appearance. The structure bared more resemblance to the SER's efforts on the quaint building at Sturry, rather than any other product of the LC&DR's.  On the ''down'' side, a rectangular-shaped timber waiting shelter was used for passenger accommodation, its design being identical to the shelter which is still in existence at Shepherds Well.

It could perhaps be argued that goods was the more important traffic at Newington, at least in the early years. The station here was surrounded by agricultural land which grew copious amounts of farm produce to be transported by rail to the major towns along the line and, also, to the capital. For this, a goods yard of three sidings was established behind the ''up'' platform, all tracks being westward-facing. The complex was controlled by a two-storey high signal box, built by the railway company itself (the LC&DR seemed to mostly use contractors for signalling during its existence), which came into use around fifteen years after the station. Positioned immediately adjacent to the west end of the station building, it was identical to the example still in use at Shepherds Well. However, being located upon the platform surface gave the cabin the additional height it required to afford the signalman a clear view over the pitched roofs of the station building and, latterly, the lattice footbridge.

For many years Newington remained little changed, but some of the surrounding agricultural land which had provided valuable goods traffic, was given over to development. Nevertheless, considerable green fields remained in the vicinity, although coal had since been an important commodity handled at the yard. The scene at the station was set to change completely, however, on the advent of the Kent Coast Electrification, as will now be discovered. As part of the 1956-authorised scheme, quadrupling of the ''Chatham'' line would take place between Bromley South and Swanley, and then from just under a ¼ mile east of Rainham, to the eastern ends of the existing platforms at Newington. The brick platforms of the latter were completely demolished and replaced by longer concrete formations, thus the timber shelter of the ''down'' side was completely swept away in 1957. The original ''up'' buildings lasted a little longer, however, until May 1959, the signal box itself having closed on 26th April of that year, when control was transferred to a new ''power box'' at Rainham. The original buildings were located at the eastern extremities of the new platforms, but new waiting shelters of concrete and brick construction were erected at the western ends of the surfaces. A large, basic metal-framed footbridge now stretched over the then newly-laid four tracks - even this structure's design was standard for the era, an identical footbridge having appeared at Slade Green Depot in the same year. Also during the 1959 works, gas lamps succumbed to electric lighting, the latter supported on the customary SR concrete brackets. It is worth mentioning that during the quadrupling through the station, two temporary wooden platforms were installed in-between the then new concrete surfaces. These only served the original double-track line until the outer loops were commissioned and indeed, they were erected upon the track work of the loops until these became operational. The full electric timetable came into use on 15th June 1959, goods traffic at the rebuilt station remaining only until October 1962. The revised Newington lasted barely a decade before the first modifications were implemented: in 1970, the ''up'' side became host to a CLASP-inspired ticket office. Some effort was evidently made to reduce the temporary-looking effect by incorporating a brown brick base, but the blue roofing is typical of the era. 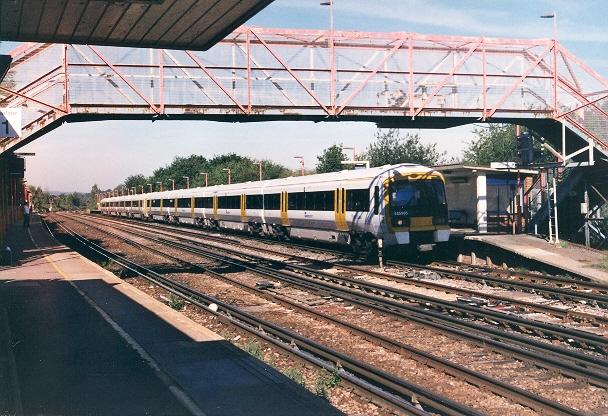 All structures in this view are of 1959 origin - nothing remains of the 1862 station. The end of the 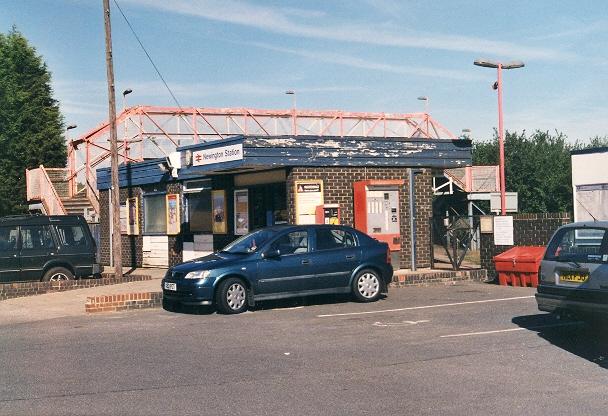 It seen here on 30th August 2005,  framed by the footbridge. David Glasspool