The ‘’North Downs Steam Railway’’ organisation was born in 1980 with the target of securing a stretch of the former Gravesend West branch. Although railway traffic to the terminus had ceased in March 1968, a short operational section between Fawkham Junction and a coal bunker was retained until 1976. Subsequently, however, the organisation eventually settled – if only temporarily – at Higham in 1981, using the still extant sidings of the goods yard on the ‘’up’’ side of the station. In 1983, the North Downs Steam Railway then found refuge at Chatham Dockyard, where its stock could have a short run on the remaining rails of the former dock network. Yet another move saw a brief stay at the dockside at Rochester, but eventually an unusual, but nevertheless interesting, permanent site solution came to light. In 1987, the organisation came to Dartford, settling at Cotton Lane in the parish of Stone. Here, there was a fairly large expanse of undeveloped land, which proved to be ideal in size for the storage of the organisation’s whole stock fleet. By this time, the North Downs Steam Railway had two steam locomotives – one of which was operational – and on the last occasion my father and I visited the site in the early 1990s, we counted no less than eight industrial diesel shunters. Two rare 1932 ex-Metropolitan Line T-stock vehicles were also on site, in company of an ex-SR luggage van, an ex-London Transport brake van, two ex-LC&DR carriage bodies, and a selection of open wagons. A ventilated van was also in evidence, which had been converted to incorporate a diesel compressor to power trains' braking systems. In 1993 the organisation had also been the recipient of an early BR Mk 2 coach, by which time both of its two steam locomotives had been restored to operational condition: Robert Stephenson & Hawthorne 0-6-0 No. 13 ''North Downs'' and W G Bagnall 0-6-0 ''Topham''.

A Thames viewing point opened alongside the railway site concurrent with the Dartford Bridge in October 1991, which, in addition to the adjacent Stone Lodge Farm (which had opened to the public as a tourist attraction in the 1970s), would help to encourage further custom for the trains. The first track laid at the site was ex-British Rail wooden sleeper, but later additions were of the concrete sleeper type. The layout was a ¾ circle affair and from memory, I vaguely remember a run-a-round loop at the end of the line, but the trains were still push-pull due to the lack of such a facility at ''Cotton Lane'' station. The sidings provided were extensive for a layout of its size, which added further interest to the railway.

Over the years the site was subject to vandalism, a great shame for such a quaint and interesting operation. This, coupled with the organisation's will for expansion, saw the the area relinquished by the railway in 1996, as all stock and track headed for the fledgling Spa Valley Railway at Tunbridge Wells West, these organisations merging. The original North Downs Steam Railway Society has now assumed all the responsibilities of the Spa Valley Railway, absorbing the organisation which originally set up the Tunbridge Wells West operation: without doubt a very positive conclusion to the former Stone-based society in their quest for a permanent site. 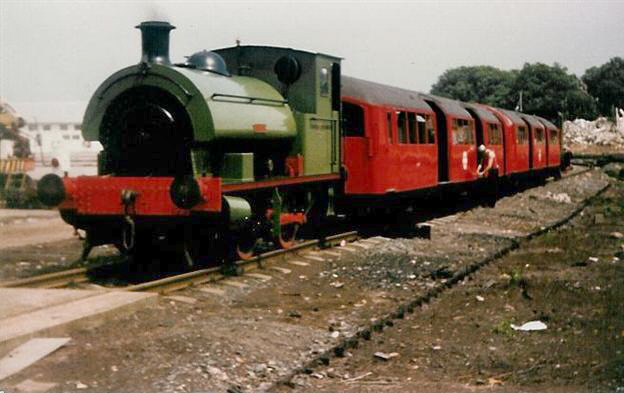 We begin the pictorial with two views of the society's early days at Chatham Dockyard, which have

been kindly submitted by Dave Humphries. Above is one of three resident steam locomotives of the

it is seen here fronting ex-Bakerloo Line 1938 Tube stock in about 1984. This was the year which

saw the full closure of the Royal Navy Dockyard. When the NDSR society moved to Stone, ''Ajax''

remained at Chatham with its two other steam engine stablemates, and a diesel shunter. The Tube

stock was sold in 1987 to the Alderney Railway, Channel Islands. The formation remained here until

Tube stock of 1959 heritage arrived on the island. Subsequently, the 1938 vehicles were shipped back

to the mainland, where they were stripped for spares by London Underground. The shells were then

dispatched to Booth Roe of Rotherham for scrapping. Dave Humphries 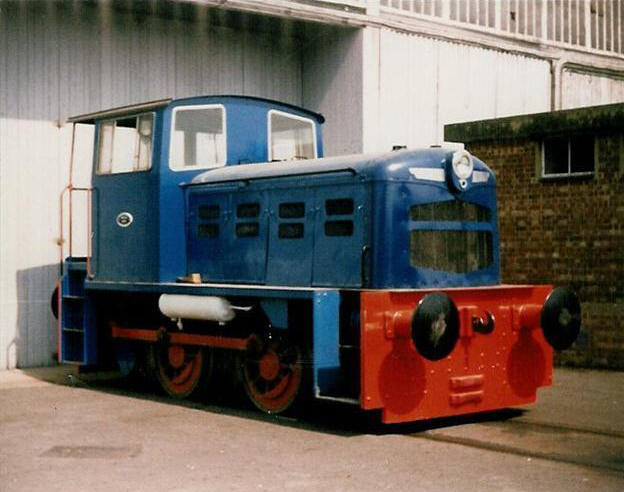 This Fowler 0-4-0 diesel shunter was part of the NDSR's own locomotive pool, and went to Stone

with the organisation. It is seen here parked outside one of the shipbuilding sheds, again circa 1984.

Dave was a teenage member of the society at this time, and when trains were run over the dockyard

rails during the weekend, he was responsible for controlling the doors of one of the carriages using

the manual air system. His friend resided in the second carriage performing a similar role. 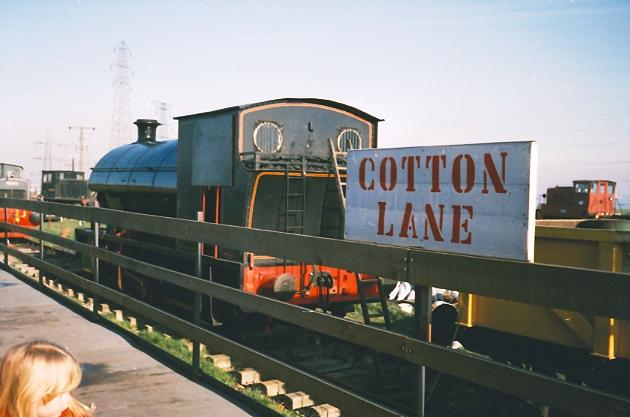 The then new Dartford site, complete with the society's first dedicated station: Cotton Lane. This

1990 view includes a variety of diesel shunters in background, in addition to Saddle Tank 0-6-0