Closure of the SER's Chatham Central branch occurred under SE&CR auspices, from 1st October 1911, after a lifespan of less than two decades. Demolition of the branch’s viaduct allowed eastward expansion of the LC&DR Rochester station and general widening of the track bed through to the Medway Bridge approaches. At rail level, the station was completely rebuilt: two platforms were replaced by a pair of spacious islands, each about 600-feet-long, serving four tracks. Each island was graced with a splendid 300-foot-long canopy, built to a similar general style as those later provided by the SE&CR at Margate and Ashford stations. Underneath the canopies were established timber offices and waiting facilities; from below emerged staircases to the subway, these frescoed at their edges with metal railings and brackets. Each platform was also equipped with a lift, the shafts of which rose up to a height which penetrated the roofs of the canopies. Each lift shaft was clad with tongue-and-groove timber and topped with a hipped roof. The existing station building of 1892 survived the reconstruction.

A triple-track formation was maintained north of the platforms to within 250-yards of the Medway crossing. As part of the same Rochester works, the ex-LC&DR line was slewed northeast so it now crossed the lattice bridge constructed for the Chatham Central branch. By the end of the rationalisation at this time, as is indeed the case today, ⅓-mile of the SER branch line survived. This included the aforementioned bridge over the Medway and the alignment of the connecting spur between Chatham and North Kent Lines in Strood. The large ex-LC&DR goods yard survived the works, becoming known as "Chatham Goods Sidings". Access to the yard was by means of a single-track inclined trailing connection with the ‘’down’’ line. The line at this point was controlled by a sturdy brick-built signal box of SE&CR origin (although based on an earlier Saxby & Farmer design with a hipped slated roof), perched on the embankment on the ‘’down’’ side of the line, in-between the station and goods yard connection.

Cosmetic alterations under Southern Railway auspices included the installation of Swan Neck gas lamps and new platform nameboards, but the most significant move forward was the introduction of electric train services. This formed the last part of the SR’s suburban electrification of ex-SE&CR lines and involved extending third rail from Swanley to Gillingham, Gravesend Central to Maidstone West, and Otford to Maidstone East. The new electric public timetable on all these routes began on 2nd July 1939.

In 1953, the valances of both canopies were renewed, the SE&CR design giving way to a plain timber variant. Later in the same decade, signalling modernisation was the order of the day as part of Phase 1 of the Kent Coast Electrification Scheme. A ‘’power box’’ was constructed on the east side of the embankment, in-between the existing ‘’Chatham Goods Sidings’’ cabin and the yard’s connection with the main line. The new signal box came into use on 10th May 1959, replacing its predecessor, when the Swanley to Gillingham section of the main line was converted to colour light signal operation.

On the turn of the 1970s, a number of historic station structures began falling foul to complete rebuilds using the austere CLASP prefabricated system. Both Strood and Rainham stations were casualties during this period, and although escaping largely unscathed, economies at Rochester were also enacted as part of this scheme. Circa 1973, the ‘’down’’ island platform canopy was dismantled and replaced by a trio of Spartan CLASP waiting shelters. The lift shaft retained its traditional casing and a short canopy was erected over the lift entrance. The "up" island canopy was also cut back by 40-foot at its southern end. 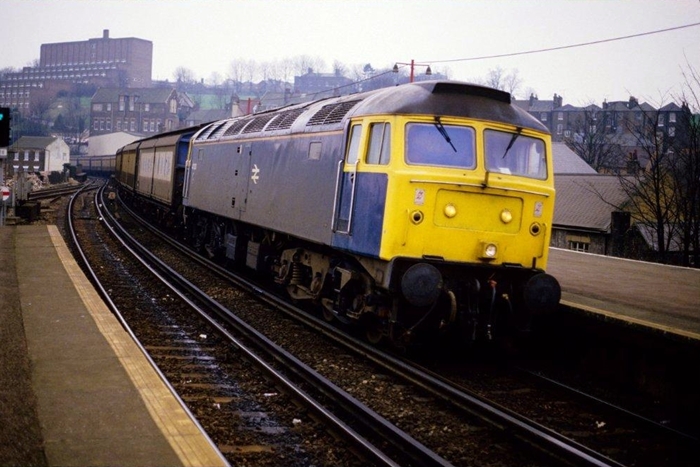 A long rake of VDA sliding door vans, headed by a BR Blue Class 47, is seen negotiating the reverse curve at the southern end of the station. © Wayne Walsh 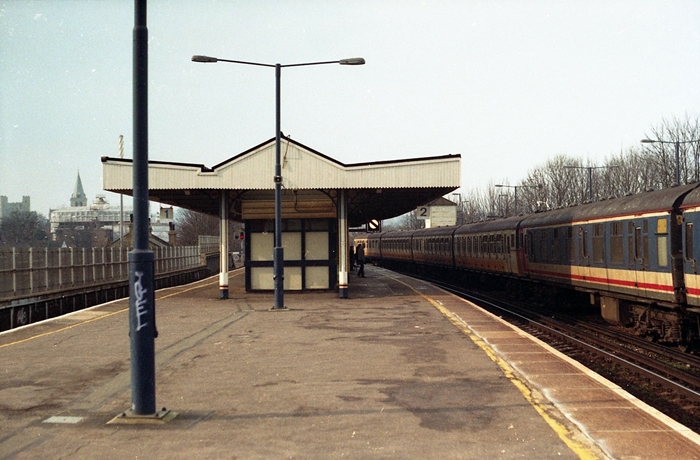 The spire of the cathedral can be seen on the left of this London-bound view, which also includes a 4-CIG/4-VEP formation on a Victoria to Faversham stopping service. The platform canopy valance design dates from refurbishment in 1953. © David Glasspool 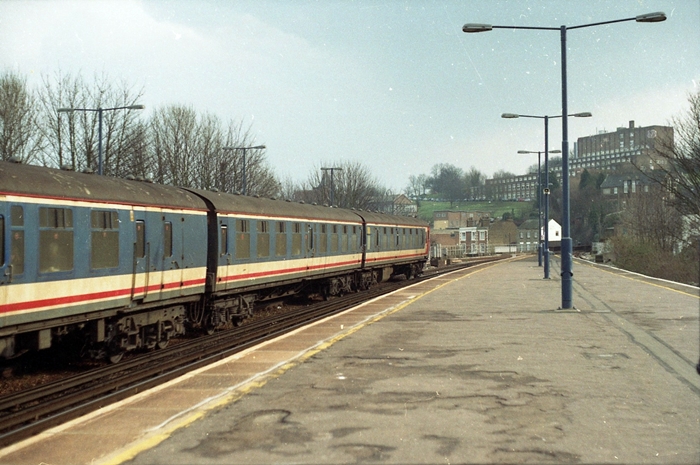 In the background of this southward view is Fort Pitt Hill, under which the line travels through a 428-yard tunnel to reach Chatham. The stations at Rochester and Chatham are under half a mile apart. © David Glasspool 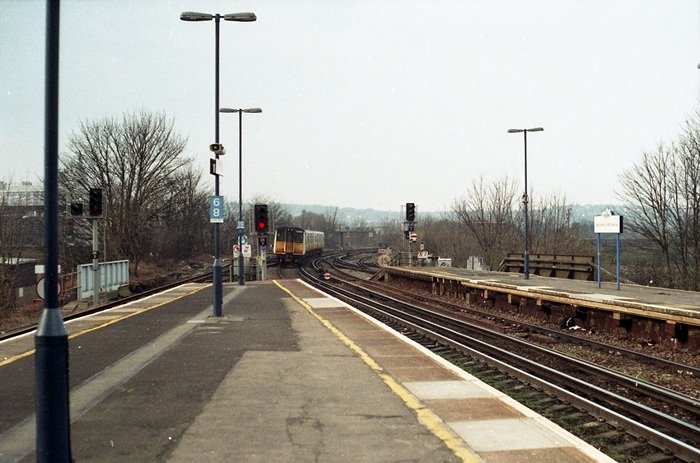 A Class 508 trundles towards Strood in this westward view from 11th March 2004. This was during the period of the Strood Tunnel closure, when direct services from London to Gillingham via Dartford were suspended for a year. Strood Tunnel was lined inside with concrete to prevent successive chalk falls inside in the future, allowing the speed limit to be raised from 20 MPH to 75 MPH. Class 508s were used to form shuttle services between Gillingham and Strood, where at the latter passengers would transfer onto a bus for Higham. © David Glasspool