This is an area which has a rich history of cement production, the first works being commissioned here as long ago as 1825. It is also believed that Kent's very first rails were laid in Swanscombe, years before any passenger lines cut through the county. Swanscombe became home to the country's largest cement works and, although closure of this site was enacted in 1990, there still remain a series or relics - most notably the huge exhausted chalk pits, in addition to redundant tracks - which remind us of an industrial era set never to return.

The South Eastern Railway (SER) commissioned the double-track North Kent Line between the Grand Surrey Canal and Strood in 1849, via Lewisham, Woolwich, Dartford, and Gravesend, passenger traffic commencing on 30th July of that year. As of 1841, the parishes of Greenhithe and Swanscombe had a combined population of 1703, the lion's share of which resided at the former, where a railway station was provided. No platforms were provided at Swanscombe from the outset, the nucleus of the village residing about half a mile south of the line. The population of Swanscombe had increased to 2323 by 1861 and, ten years later, had further risen to 3105, chiefly through the growth of cement production in the area. However, it was not until the 20th Century that a station finally opened here.

"Swanscombe Halt" was commissioned on 2nd November 1908, at about milepost 20½ from Charing Cross via Greenwich. The station comprised a pair of timber platforms and had been brought into use, along with "Stone Crossing Halt" xx-miles to the west, on the inauguration of the SE&CR's "railmotor" service. In the early 20th Century, the SE&CR faced increasing competition for local traffic from tramways, which by this stage had a network of lines which ran from Woolwich to Horns Cross (Stone). Thereafter existed a gap of about a mile, after which the Gravesend tramway network began - there was never a physical connection between this and the line from Woolwich. The "railmotor" was a contraption which encompassed a steam locomotive and single carriage upon a common underframe, and was seen as an economical way of retaining that passenger traffic which the tramways were encroaching on. The "railmotor" concept lasted for a decade, after which the traction was taken out of service and the carriage portion converted to standard locomotive-hauled stock. The ride was reportedly very bumpy and the seats as hard as granite, so it is likely passengers were glad to see the back of this novel solution to serving smaller communities. The timber halts opened in 1908 at Stone Crossing and Swanscombe were, however, retained.

The North Kent Line was an early candidate for third rail electrification in the Southern Railway's (SR) programme of modernising suburban lines. Electric services commenced between London and Dartford via all three North Kent routes in 1926, the full passenger timetable coming into use on 12th July of that year. Extension of third rail from Dartford to Gravesend occurred four years later and in combination with this scheme, the original "Swanscombe Halt" was closed and replaced by a new station 840-yards to the east. This comprised two 660-foot-long prefabricated concrete platforms, which had been manufactured at the SR's works at Exmouth Junction, Devon, and upon these was a timber waiting shelter of tongue-and-groove construction, each about 30-feet-long. The platforms were each fed by a flight of stairs, which connected to dedicated footpaths emanating from the High Street which crossed over the line at the western end of the station. The platforms were formally brought into service for scheduled passenger traffic on 6th July 1930. Electric lighting was supported upon concrete posts with hexagonal lampshades and a track foot crossing was provided for staff. The latter was not situated at the very end of the platform ramps, but instead in line with the waiting shelters, which required a step down from platform to track level.

Initial alterations under British Railways merely included the replacement of the SR's "Target" name signs with "Sausage" Totems, but beyond this and other minor cosmetic alterations, this station very much remained the same as when opened in 1930. By the summer 1978 timetable, the "Halt" sufffix had been dropped from the nameboards, but the largest wave of changes were yet to come. In about 1995, in a bid to update the station, a ticket office was commissioned on the High Street, beside the footpath giving access to the "up" platform. This was a pitched-roof design of brown brick construction, a smaller version of those structures which had previously come into use at Lee and Kidbrooke. At this time, both timber waiting shelters on the platforms were flattened and replaced by much smaller glazed structures. Finally, in early 2013, both platforms were extended at their eastern ends by 140-feet, using concrete components. 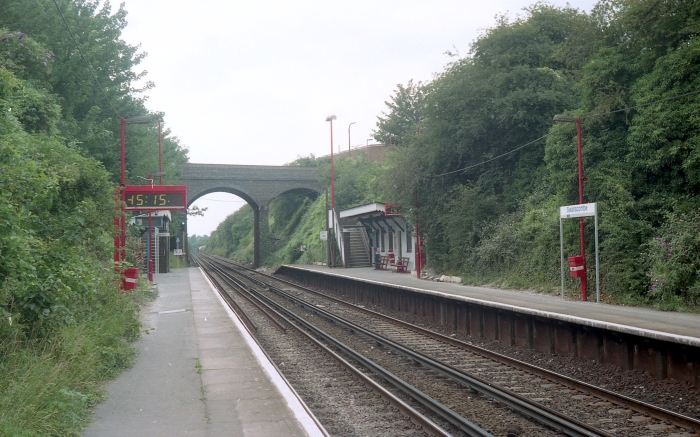 A London-bound view on a splendid summer's day shows the original timber waiting shelters and prefabricated concrete platforms, which were all of 1930 origin. Network SouthEast colours abound in this photograph, which illustrates to good effect the station's location in a deep cutting. The bridge carries Swanscombe high street. © David Glasspool Collection

The original shelters are again in evidence in this eastward view, which shows 4 CAP No. 3303 forming the rear of an eight-car service. The three tallest chimneys in the background belonged to Northfleet Cement Works, whilst the other two (overlapping each other in this picture) were those of Northfleet Power station. The latter was oil-fired and had been taken out of operation in October 1987, thereafter remaining in a mothballed state in case needed for future electricity demand. © David Glasspool Collection 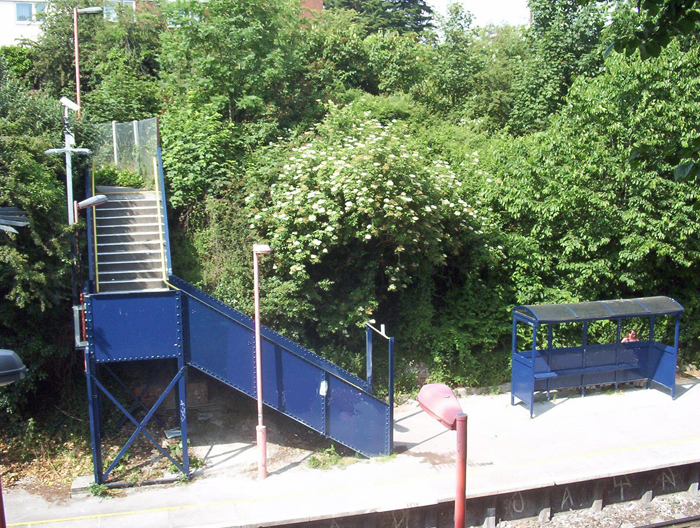 Both waiting shelters had gone by the time of this photograph, but the metal staircases of 1930 still existed. The door frame at the foot of the staircase formerly housed a trellis gate to close access to the platform. © David Glasspool 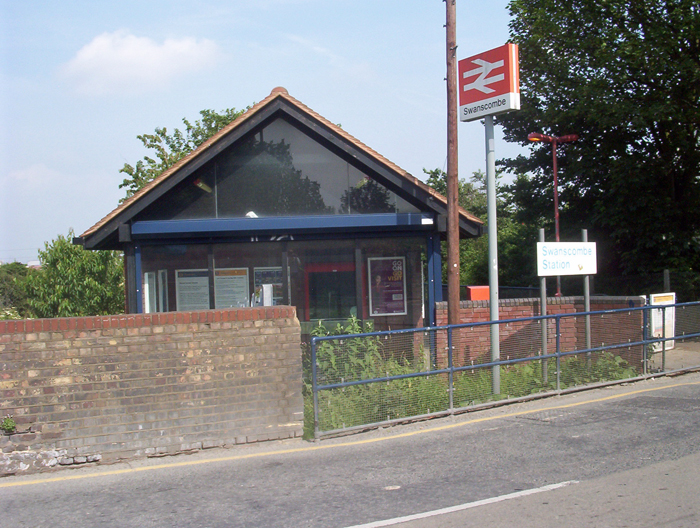 A new ticket office was provided at street level in about 1995, built in the then prevailing Network SouthEast style. The footpath leading to the "up" platform is to the right of the building. © David Glasspool 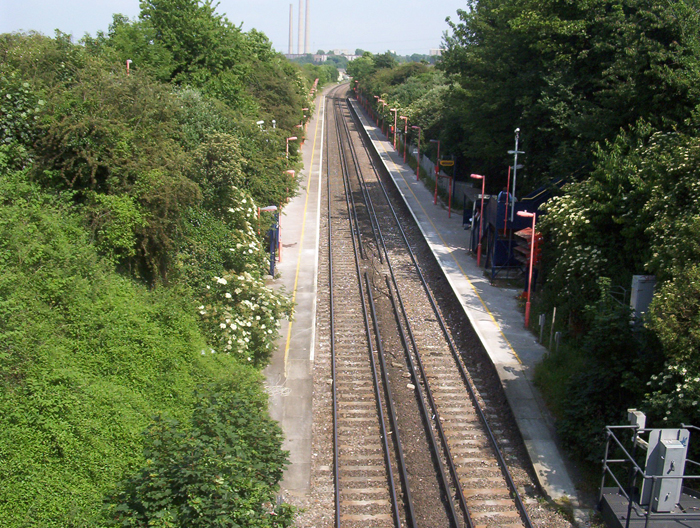 By the time of this eastward view, the line crossed the construction site of the Channel Tunnel Rail Link beyond the curve in the background. The gap in the conductor rails here preserved the former site of the track foot crossing, even though this had long since disappeared. © David Glasspool