The first station to bear the town's name was that of the Canterbury & Whitstable Railway's, the company of which had established a terminus adjacent to the harbour. The line, just over six miles, had first been proposed in 1823, subsequently being ratified on 10th June 1825 with the formation of the ''Canterbury & Whitstable Railway Company''. It formally opened on 3rd May 1830 to become Kent's first passenger carrying railway - the first rails in the county had been laid at Swanscombe some five years previously, as part of a cement works complex. The railway was subsequently leased to the SER in 1844, and then slewed into this company's station (later ''Canterbury West'') when it opened on 6th February 1846. The coastal resort's second station was that of the ''Herne Bay & Faversham Railway's'', this company having been formed by a group of local businessmen, seeing ratification by an Act of Parliament in 1857. The concern's endeavour was to build an eastward extension from the East Kent Railway's line at Faversham (which, at the time, ran as far westward as Chatham) and onto the Kent Coast, with aspirations to reach Thanet. The line was opened to Whitstable on 1st August 1860, but the commissioning of the remaining stretch to Herne Bay was held off until 13th July of the following year, as a result of the SER claiming that the bridge their Canterbury & Whitstable branch used to cross the former's route was unsafe. The Herne Bay & Faversham Railway had been renamed the ''Margate Railway'' in 1859 to reflect its hopes of reaching Thanet, then in 1861 this changed again to the ''Kent Coast Railway Company''. Ramsgate was finally reached and opened to passenger traffic on 5th October 1863, and the line was leased by the LC&DR from the outset, this subsequently absorbing the smaller concern in 1871.

Having been built by an independent concern, station architecture along the line to Thanet was decidedly unlike the standard LC&DR intermediate station designs, many of which are still in evidence today (Sole Street and Adisham, to name but two). Herne Bay and Margate were graced by the same main station building design, on their ''down'' side (the former at which this still exists), which seemed akin to that of a Victorian school. Whitstable appears not to have been opened with such an elaborate structure, but two platforms were still in evidence, as was a single-track goods shed to the east of these, on the ''up'' side. This station was an early casualty of the line, not because the town did not offer the levels of patronage required to justify keeping it open, but instead due to the planners and developers of the up-and-coming area of Tankerton asking for the platforms to be re-sited. For this, a completely new station was built approximately 660 yards to the east of the existing establishment, and the latter subsequently closed. What did not move was the original goods yard, this remaining as the only surviving part of the original complex for many years, before closure to it came on 18th April 1964, the site later being cleared.

The then new station opened on New Years Day 1915, featuring two curved platforms and being of a distinctly different design to its earlier counterparts on the route. It was named ''Whitstable & Tankerton'' from the outset, in response to housing development at the latter. Substantial station buildings of red brick construction, frescoed with stonework, appeared on both ''up'' and ''down'' sides, both of identical design. Earlier examples of matching structures at stations were also to be found at Ashford and Folkestone West, to name but two. The canopies here were similar in appearance to those installed at Broadstairs and being a later addition to the network, a lattice footbridge was provided from the outset, this displaying the interesting spectacle of cutting through the centre of both platform canopies. Finally, an SE&CR-built signal box, reflecting the design of the former Saxby & Farmer company, was erected at the London end of the ''down'' platform. Over the years the station has changed very little, much of this down to its robust and practical, but nevertheless pleasing, design. Operational differences were enforced from 15th June 1959 onwards with the commencement of the full electric timetable via the ''Chatham'' main line, but the station kept is mechanical signal cabin for another nine years to the month. The platforms were lengthened with prefabricated concrete at their eastern end - to the design of the Southern Railway, rather than the cast supports of the Southern Region - which allowed the station to accommodate twelve-car EMU formations then being introduced. The final piece of jigsaw was put into place in 1970, with the dropping of the ''Tankerton'' suffix. 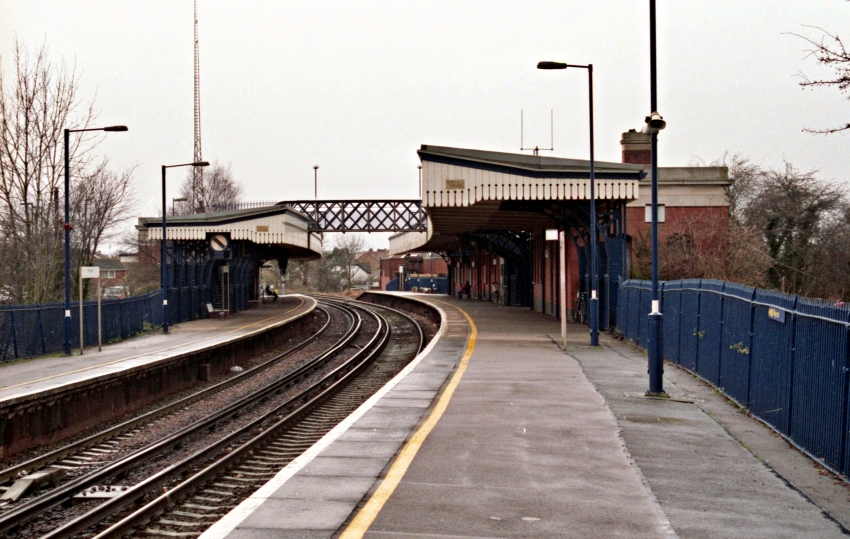 A westward view from 10th March 2006 reveals the pleasing canopies, the main buildings and

the lattice footbridge. Even the metal fencing lining the rear of both platforms is of 1915 origin.

Apart from modern lighting and signalling, this station remains more or less how it was when 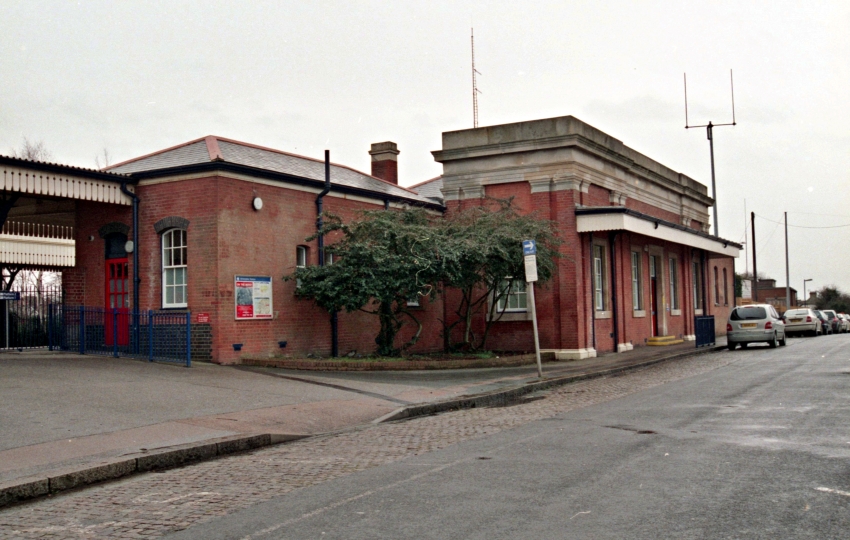 The station entrances on both sides are identical, but in relation to each other, they are staggered,

rather than directly opposite. Worthy of note here, on 10th March 2006, is the cobbled approach,

remarkably still in existence, despite the advent of tarmac. David Glasspool 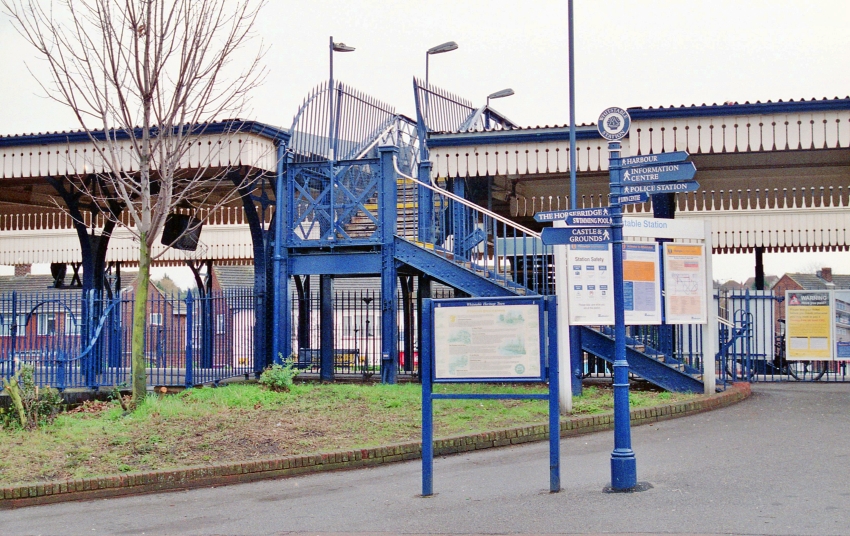 Head left for the castle and right for the harbour! The footbridge's relationship with the canopies

is of architectural note, as seen here on 10th March 2006. The spiked fencing flanking the second

flight of stairs is not as recent as would perhaps be thought; it was installed during the 1960s.