The station rebuild saw the opening of a 44-lever signal box north of the platforms, sandwiched in-between the ''up'' line and turntable road, which replaced the earlier pair of cabins. This was quite a large structure, given the comparatively small terminal layout, and was a typical SER design of all clapboard construction, complete with sash-style windows and a slated hipped roof. The re-locating of the turntable required the insertion of a trailing crossover near the terminating ends of platform lines Nos. 2 and 3, to provide a run-a-round loop for steam locomotives. Crossovers at the London ends of the platforms were moved further north from their original positions, and a berthing siding came into use on the western side of the site, running parallel with platform line No. 1. At the northern ends of platforms 1 and 2 emerged a water column. The short ''up'' siding, added during the 1880s and no more than 50 yards in length, was abolished. On its site was later opened a much longer siding, about 200 yards in length, which came into use during February 1903.

Both LSWR and LB&SCR companies started to electrify parts of their London suburban networks prior to World War I, but the poor old SE&CR lacked the necessary capital to fund a similar scheme. Thus, it was left to the Southern Railway to pick up the pieces, and this company wasted no time installing third rail on ex-SE&CR inner suburban routes. Electric services first commenced between Victoria/Holborn Viaduct and Orpington, via Bickley and Orpington Junctions, on 12th July 1925. The next stage involved extending third rail northwards from Orpington to the ex-SER termini of Cannon Street and Charing Cross. Between August and November 1925, an extensive re-signalling scheme was undertaken between these two stations and London Bridge, re-designing the track layout on this part of the network for electric operation. It was intended to commence electric services from Cannon Street and Charing Cross to Addiscombe, in addition to Hayes, Orpington, Bromley North and Beckenham Junction, on 1st December 1925, but power supply problems prevented this. In the meantime, significant alterations were made at Addiscombe as part of the same scheme. On 11th July 1925, the run-a-round loop arrangement was abolished on removal of the trailing crossover between the southern ends of platform line Nos. 2 and 3. On the ''down'' (eastern) side of the layout, a 500-foot-long EMU cleaning shed was erected, which comprised a steel frame clad with asbestos, and covered four tracks. On the ''up'' side, the turntable and 1903 siding were removed, and upon their sites and beyond was laid a coal yard. The latter comprised a trio of lengthy London-facing sidings, all over 270 yards in length. Both the coal yard and bay siding (parallel with platform line No. 1) were absent of third rail, and the re-arranged layout resulted in the signal box acquiring an additional three levers. Scheduled electric working commenced on 28th February 1926. The SR had earlier renamed the station ''Croydon (Addiscombe)'' on 1st April 1925. Within a year, the prefix and suffix had been reversed in order.

Early on under British Railways auspices, an attempt was made to alleviate peak-hour overcrowding on South Eastern Division commuter services. This culminated in a £6 million scheme to lengthen suburban train formations to ten vehicles, which required structural works at stations. In 1957, platforms 1 and 2 at Addiscombe were extended by about 180-feet, using Exmouth Junction-manufactured prefabricated concrete. This brought them right up to the signal box: as a result, platform line No. 1, which was formerly routed in front of the cabin, had to be re-laid behind it. The canopy valance on this surface was also simplified, the SER Clover pattern giving way to a plain timber design, and electric lighting was installed upon concrete bracket posts. Platform 3 was completely demolished to make way for an electrified siding. The terminus had been known as plain ''Addiscombe'' since 1955.

Despite early electrification of the Mid-Kent Line and its tentacles, the coal yard at Addiscombe remained steam worked, Type 3 diesels taking over this role from about 1960 onwards. Goods traffic was handled at this delightful terminus station until 17th June 1968, but these sidings were not formally decommissioned from general use until 9th November of the following year. Thereafter, this station retained a distinct air of antiquity, for it continued to possess a classic SER booking hall, a traditional (albeit simplified) canopy and, unusually, a full complement of semaphore signals. This short section of line from Elmers End remained as a semaphore stronghold, within a dense suburban system which was fast being converted to colour light operation under the control of the London Bridge Panel. This signalling centre took control of the Ladywell to Hayes section of the Mid-Kent Line on 28th September 1975, two-aspect colour lights coming into use between Elmers End and Hayes. Both Addiscombe and Woodside stations kept their SER signal boxes, that at the latter having been retained to control the junction with the line to Sanderstead. The Woodside to Sanderstead line was closed to public traffic on 13th May 1983; Elmers End to Addiscombe was arguably retained due to the presence of a depot at the terminus.

In 1993, the ''Croydon Tramlink Bill'' was submitted to Parliament and received its Second Reading on 26th May 1993. The ''Tramlink'' project aimed to take over the sites of existing British Rail routes which were lightly used, namely Elmers End to Addiscombe and Wimbledon to West Croydon via Mitcham Junction, and convert them into light rail tram lines. The Bill successfully passed through Parliament on 21st July 1994 ̶ Addiscombe station was doomed. As a prelude to this, the train crew depot at the terminus had closed on 12th April 1993, but the 1925 EMU shed continued to be used for EPB stock berthing. In March 1996, the SER signal box was destroyed by an arson attack. As a result, only the ''down'' line was used thereafter in accordance with the ''one engine in steam'' procedure, and the station was reduced to just one operational platform line, that of No. 2. By this time, the classic SER booking office was completely closed, passengers having to make do with an inconspicuous side entrance at all times. The last 4 EPB units were withdrawn from public service in April 1995, and the depot building at Addiscombe ceased to be used to stable stock; subsequent Class 465/466 ''Networker'' stock was prohibited from using the building. The final public service over the line was the 21:40 Addiscombe to Elmers End shuttle, formed of Class 466 No. 466016, on 31st May 1997. This coincided with the closure of the Wimbledon to West Croydon line. Thereafter, the terminus at Addiscombe was left in limbo, all infrastructure remaining intact awaiting a decision on its future. The actual station site was the only section of the original route from Elmers End which was not required for the approved Croydon Tramlink project. An attempt was made to rescue the terminus for conversion into a railway museum, but the local council and ''Railtrack'' had other ideas. As seems to be the order of the day with many historic sites in this age, the station was sold off to a housing developer in 2000, and the bulldozers moved in during the Summer of 2001. This was a sad end for a station which had retained its bygone charm to the very end. 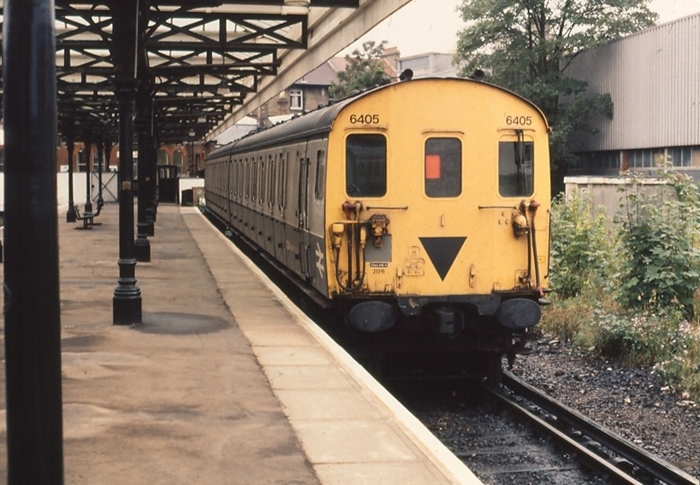 2 EPB No. 6405 is seen stabled empty stock alongside platform 1. On the right is an overgrown area where a non-electrified berthing siding was once situated. Clearly in view is the splendid latticework of the canopy, which at this time sported a BR valance design from 1957. In the background can be seen the delightful main building, of red brick construction and complete with SER sash-style windows. Today, not a brick remains. © David Glasspool Collection 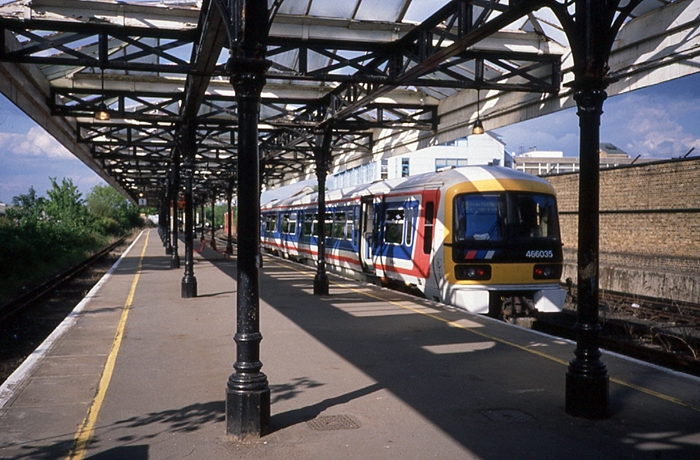 During the station's last month of operation, Class 466 No. 466035 is seen at platform 2 forming the shuttle service to Elmers End. © David Glasspool Collection 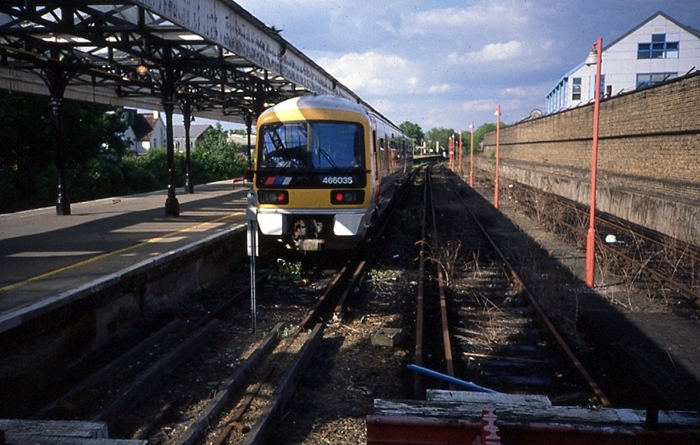