In 1914, at the beginning of the First World War, an airbase was established at Kingsnorth, on the southern edge of the Hoo Penisula. Used by the Royal Flying Corps division of the British Army, after the conflict it subsequently became a base for airships. In 1930, the site was purchased by Berry Wiggins & Co Limited, which built the Hoo Peninsula’s first oil refinery there. This was completed in 1932, the year of which also saw a connection from the refinery being made with the Southern Railway’s single-track branch across the bleak marshland. The connection trailed off in a south-westward direction, which required trains to be travelling towards Hoo Junction in order to access the site. The private spur was separated from the SR line by a gate and beyond this, it split into numerous sidings which played host to a motley bunch of second-hand tanker wagons.

By 1964, Berry Wiggins & Co’s oil refinery at Kingsnorth had an annual capacity of 190,000 tons; the company also had a complex established at Manchester (Weaste) which, during World War II, had received a direct hit during a bombing raid in 1940. New builds of tanker wagons came into service for Berry Wiggins after the war, and the Kingsnorth establishment had been joined in 1951 by the BP refinery on the Isle of Grain. The Berry Wiggins complex ceased to refine oil  in 1977, its ''Kingsnorth'' name now being associated with a power station, but refining at the comparatively newer Grain complex stopped only half a decade later. Subsequently, oil was shipped into the country in an already refined state, but deliveries were still made to Grain thereafter, the last oil train not departing until 1999.

The last regular traffic to this location comprised tank cars for cleaning which were tripped to and from Grain on an occasional basis and were certainly still passing in the late 1970's.  The tank cars were collected from the exchange sidings just inside the gate and moved by a private loco down to the industrial estate which was presumably on part of the old refinery site.  The final traffic comprised stone (ex Mendips I think) for sea defence works which arrived for a period in the early 1980's; this traffic was unloaded on the left hand exchange siding and taken away by road.

A Hoo Junction-bound view shows the connection with Kingsnorth sidings (formerly Berry Wiggins) and, on

the left, the ground frame which operated the points. © Robert David / David Morgan

On the far right, the single-track freight branch is seen heading off in the Hoo Junction direction. The Berry

Wiggins/Kingsnorth sidings were for long protected by this gate. © Robert David / David Morgan 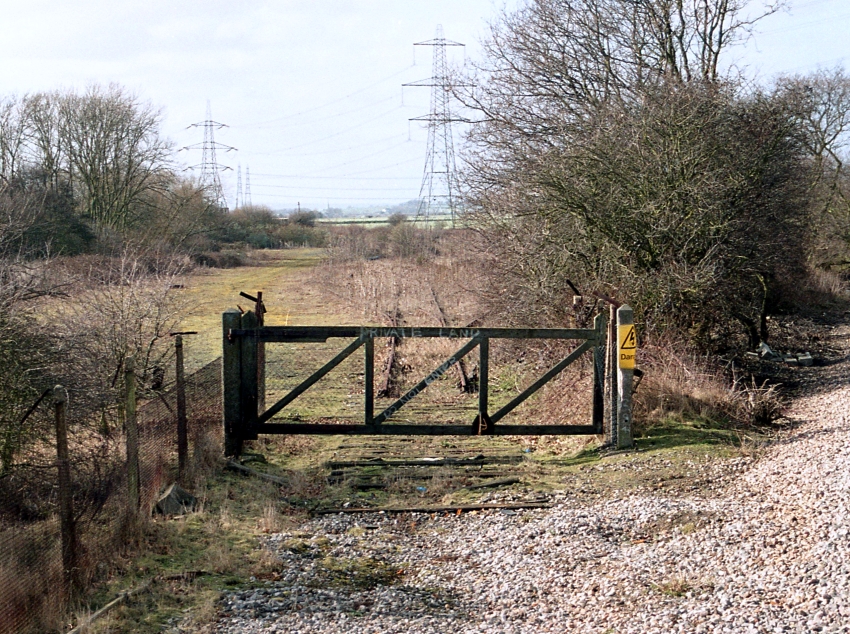 The refinery became defunct in 1977, but sidings were retained on the site; the physical connection with the Grain

branch was only removed in 2002, during track replacement. This south westerly view on 25th February 2006 shows

that the gate protecting the land still remained, and the rails had a liberal covering of grass. David Glasspool