The very fact that Faversham was initially a terminus ensured that locomotive facilities were provided here from the outset. The first engine shed was a small, two-track dead-end affair, positioned beside the ''up'' line, just beyond the level crossing to the immediate west of the original station. This came into use with the latter in 1858. Services between here and Chatham commenced on 25th January of that year, and through running between Victoria and Canterbury was possible from 3rd December 1860. Faversham became a junction on 1st August 1860, with the opening of the Whitstable extension, and to coincide with this, the decision was taken to erect an enlarged locomotive depot. This was to be located within the triangle created by the diverging lines, and consist of a brick-built dead-end structure accommodating two westward-facing tracks. When commissioned, the building measured 34-foot by 202-foot, featured a vented pitched-roof, and to its west existed a turntable. Whilst this later building became the main engine shed at the site, the earlier-opened structure continued to be used in conjunction with it.

In October 1897, a complete rebuilding of Faversham station commenced, which included total upheaval of locomotive and goods facilities. The original engine shed of 1858 was abolished, and the 1860-built depot was doubled in size. This was achieved by erecting another two-road dead-end building adjoining the northern elevation of the existing structure. The extension matched the dimensions of the latter and similarly demonstrated a vented pitched roof, but unlike its counterpart, this featured sloping ends, as per a pyramid. Attached to the northern elevation of the new building were single-storey brick-built offices, which extended for approximately half the shed's length, and beside these was a three-storey high water tank. The existing turntable was removed and a larger, 49-foot 11-inch replacement installed at an alternate site, immediately to the north-east of the shed buildings. The opportunity was also taken at this time to build a wagon repair shop: this 100-foot long building was instantly recognisable as a product of the LC&DR. The structure was positioned north of, and at forty-five degrees to, the engine shed, being sandwiched in-between the turntable and the departing Whitstable line. Crème brick construction was used throughout, and the building incorporated the same semi-circular orange-brick window frames found on the main structures at the rebuilt station.

The formation of the joint Managing Committee of the SE&CR in 1899 saw a number of ex-SER and ex-LC&DR sheds co-operate with each other. Locomotives from as far away as Strood, some twenty-one miles westwards, could at times be found at Faversham, and engine exchanges between the latter and the ex-''Chatham'' shed at Gillingham were everyday occurrences. Throughout the SE&CR's tenure, locomotive allocation at Faversham included a number of the graceful Wainwright ''D'' Class 4-4-0 locomotives, these of which had begun to emerge from Ashford in 1901 as the company's first true express passenger engine. From 1921 onwards, engines of this type started re-appearing as the rebuilt ''D1'' Class, these of which incorporated – amongst other features – an enlarged superheated boiler. Class ''C'' 0-6-0 tender engines, introduced in 1900, formed the shed's allocation of freight locomotive types. After its formation in 1923, the Southern Railway acted swiftly to electrify ex-SE&CR suburban lines in a push for quicker, cleaner, and more frequent services into and out of the capital. Consequently, this led to numerous closures of suburban steam sheds throughout the 1920s and 1930s, and subsequent re-allocating of the tank engines which were originally built to ply these commuter routes. A small batch of ''H'' Class 0-4-4 tank engines arrived at Faversham as a consequence; like so many ex-suburban types, these locomotives were redeployed on rural turns. Such engines formerly had allocation at Bricklayers Arms, Cannon Street, and Slade Green sheds, but electrification ensured that the latter two went out of use to steam completely, although Bricklayers Arms continued to house a large allocation of mainly freight engines.

The 1939 Gillingham electrification resulted in the complete closure of the shed at Strood (it subsequently becoming a goods depot); the locomotive allocation at Gillingham itself fell by approximately half. By this time, the shed at Faversham had already lost its own independent depot status, and both it and Gillingham were worked virtually as one depot, under a common management. In the meantime, modifications had been made to the site at Faversham: the original 1860-built two-road shed had been subject to a re-roofing exercise in 1935. This included the removal of the western and eastern timber-built triangular roof façades, and the dispensing of the slate tiles. All these features were replaced with corrugated asbestos sheeting, which continued to be arranged in a pitched-roof fashion. Compared with slate, this material was cheap and easy to use, but more importantly, it was fire proof. It was left to British Railways to carry out further alterations; within two years of its existence, the Southern Region had extensively modified the 1898-completed shed building. This had included the complete demolition of the roof structure, leaving just the side walls, and the insertion of a concrete lintel across the building's entrance, to support the new roof structure. With reference to the latter, this featured a trapezium-shaped cross section (as per that which soon appeared at the modified Tonbridge shed), complete with a steel frame clad with corrugated asbestos sheeting.

''Phase 1'' of the February 1956-approved Kent Coast Electrification Scheme was to signal the end of Faversham as a steam shed. By the summer of 1958, conductor rail had already been delivered to the station site, and by the end of the year, work commenced on converting the engine shed into a diesel depot. The full accelerated electric timetable on the ''Chatham'' main line came into use on 15th June 1959, by which time the shed had become completely redundant as a steam base. The aforementioned conversion works had included the installation of cylindrical fuel tanks alongside the shed approach tracks, and the demolition of the original 1860-erected building, the latter of which also saw the removal of tracks from this portion of the site. The turntable remained in situ right up until 1966, and the 1898-completed shed and accompanying offices, in addition to the wagon repair shop of the same era, were spared. By the early 1970s, the diesel depot had begun to decline, and the remaining shed building was occasionally used for rolling stock storage. These structures remain to this day, and although derelict, are Grade II listed. 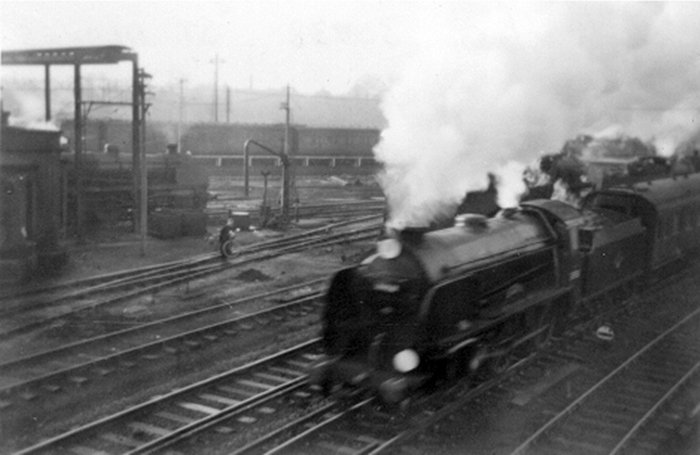 via Herne Bay train, as an ''N'' Class Mogul can be seen on one of the shed approach roads. In the background can

also be seen carriages in the berthing sidings. The Late Brian Relf, courtesy of Colin Relf 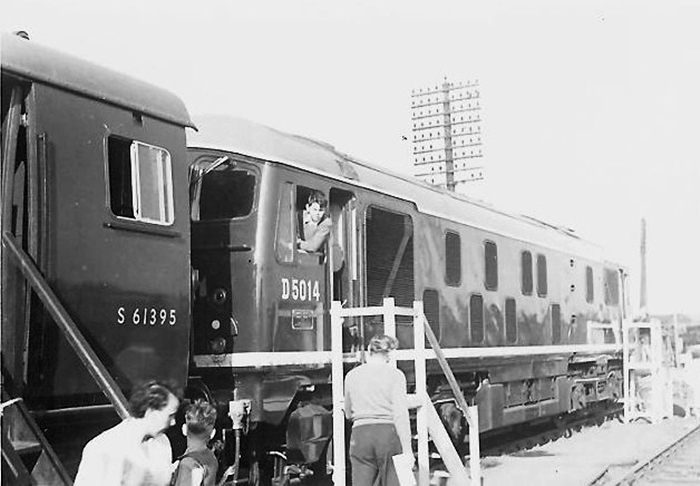 This is the Faversham Open Day, providing an opportunity for the public to get up close to new rolling stock. 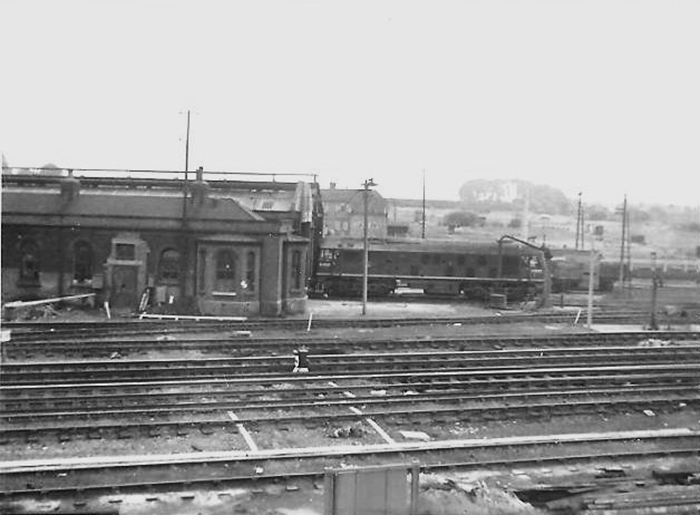 engine shed which still exists today. These locomotives arrived on South Eastern Division metals from the