Apart from small detail changes, such as the installation of Swan Neck gas lamps, ‘’Target’’ name signs, and a prefabricated concrete enclosure behind the ‘’dock’’ line, little changed at Honiton during Southern Railway ownership. The run-in name boards were also switched to concrete construction and, indeed, this material had not come far: it had been produced at the ex-LSWR’s Exmouth Junction concrete works, some sixteen miles to the west. By 1930, an additional siding had appeared in the ‘’down’’ side goods yard for exclusive use by the adjacent saw mills. By 1938, some 48,000 passengers were using Honiton station, and within five years this had increased to 250,000. Remarkably, however, the station was ignored by virtually every London express, which required passengers to change at Salisbury to continue onto the capital.

Sadly, the British Railways era is one of severe decline and degradation for this once profitable route, as regional border changes saw old company rivalries brought to the fore. Significant alterations at Honiton commenced in about 1955, whilst still under Southern Region control. At this time, many stations along the line began to lose their decorative charm as general site overhauls led to simplification of the architecture. Both northern and southern façades of the main two-storey-high section of the station building were altered: this eliminated the pronounced stone edges in front of the slated pitched roof. The latter, which was formerly recessed behind the front and rear façades, now overhung the walls. The impressive chimneystacks were retained, but another consequence of the same work was the complete whitewashing of the main building’s walls, hiding the red brick and attractive stonework. The footbridge also lost its glazing but, for the time being, retained its roof. On 16th June 1957, the ex-LSWR signal box was replaced by a modern brick cabin, situated at the western end of the ‘’up’’ platform. This comprised a 24-lever manual frame, and was part of a signalling modernisation programme which saw similar cabins come into use at Sherborne and Crewkerne in 1960.

September 1962 was a pivotal moment in the route’s history: ex-LSWR lines west of Salisbury came under Western Region control. Through steam-hauled services from Waterloo to Exeter and Plymouth ceased on 4th September 1964 – steam completely vanished from the Exeter area in the following year. On the plus side, Honiton was now served by direct trains to London. During April 1967, singling of the route occurred, commencing with that section between Wilton and Templecombe, and followed in May of the same year by that between the latter and Chard Junction. Single-track working of the route between Chard Junction and Pinhoe occurred on 11th June 1967. Goods facilities at Honiton were withdrawn on 8th May 1967, and by 1970, all station structures had been razed to the ground – only the footbridge was left standing as a remnant of LSWR heritage, but even this lacked its roof. Dreary rectangular CLASP (Consortium of Local Authorities Special Programme) structures appeared on both platforms. Retention of a passing loop here, in addition to an ‘’up’’ siding for engineers and the 1957 signal box, broke the boredom for waiting passengers.

In more recent times, efforts have been made to provide the current Honiton station with some style. In 1994, a slated hipped roof was erected above the CLASP ticket office on the ‘’down’’ side, protecting passengers from the elements and making the station a little less of an eyesore. The footbridge remains testament to the LSWR, but it is unlikely that the structure will ever see a roof and glazing again. 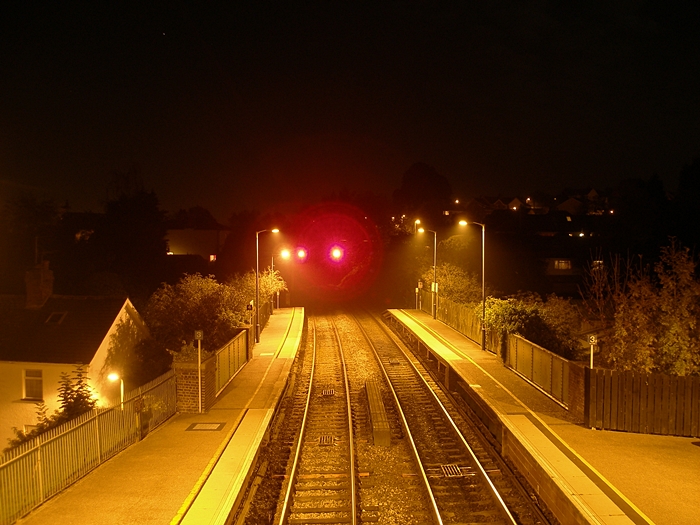 Platforms passing over the below road at the eastern end of the layout have for long been features of the station. The water tower was formerly located on the left, just beyond the end of the ''up'' platform. © David Glasspool 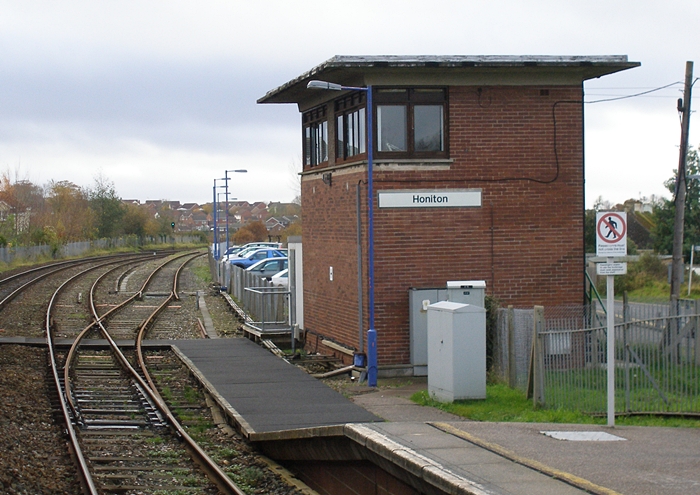 Now in the daylight, the connection between the ''up'' line and engineers' siding can be seen in detail. Of note are the catchpoints and the signalman's walkway across the running lines. © David Glasspool 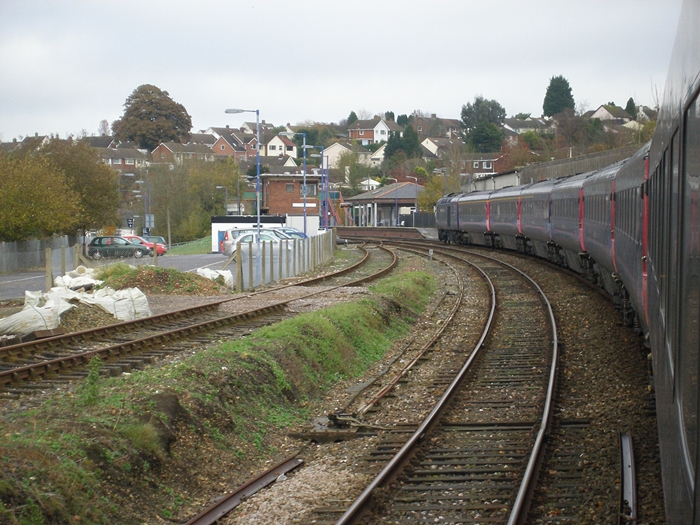 A view from a departing InterCity 125 shows the running lines dropping sharply from the station, whilst the adjacent engineers' siding remains on the level upon an embankment. © David Glasspool 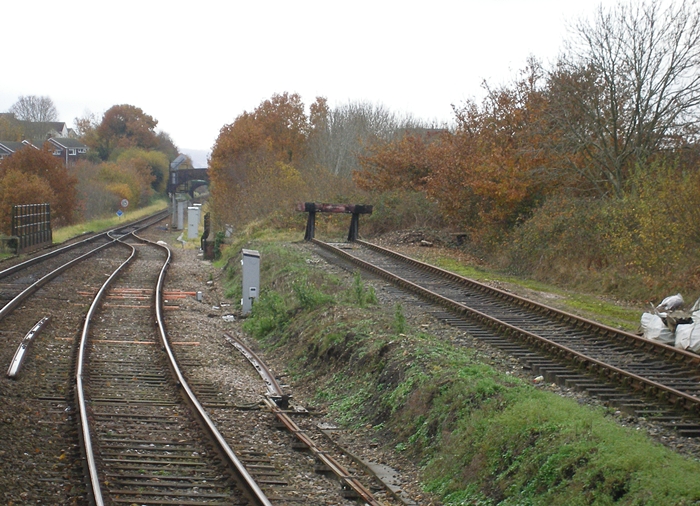 The siding is about 230-yards in length and is seen terminating on the right. On the left can be seen the convergence of the station passing loop back into single-track formation, after which the speed limit increases to 85 MPH. © David Glasspool