Beginning life as a typical rural stop on the Salisbury to Exeter section of the LSWR’s main line to the south west, this station later developed into an extensive layout tailor-made to the need for fast expresses to overtake stopping services. The site came into use with the single-track Yeovil to Exeter extension on 19th July 1860, being known as ‘’Colyton for Seaton’’ from the outset. Two platforms emerged either side of a passing loop formation, and architecture was standardised on a Gothic design produced by Sir William Tite. The main building was positioned on the ‘’up’’ platform and like its counterparts at Axminster and Honiton, was constituted of red brick, with wall edges and window frames being lined with stone. The structure comprised a main two-storey-high central section, which formed the attractive northern and southern façades of the building, and was flanked to its west and east by two-storey and single-storey-high appendices respectively. Whilst based on the same fundamental design, variation always existed between the station buildings along the route, and no two were exactly the same. Extending from the building’s southern façade was an attractive flat-roofed canopy, 60-feet in length, supported upon four cast-iron stanchions. This demonstrated an attractive spiked timber valance, which was in fact non-standard for this section of line: most canopies, as mentioned elsewhere on the website, comprised a valance of irregular saw-tooth pattern. The ‘’down’’ platform appeared to be provided quite liberally with enclosed waiting accommodation. First of note was the brick-built shelter, which measured 45-feet in length and, like the main building, was constructed to a standardised design. The design outline in fact produced a miniature version of the station building: a pair of triangular pitched-roof sections – akin to scaled-down versions of the main building’s façade – flanked a central shelter with a forward-sloping roof. Immediately to its east was a second waiting room, rectangular in shape and fully enclosed. This measured 25-feet in length, was of tongue-and-groove timber construction, and featured a flat roof and sash-style windows. Finally, both platforms were linked by an attractive footbridge, positioned just to the east of the station structures: this was supported on either side of the line by brick-built staircases, and was fully enclosed by a curved roof and glazing (it is worth noting that the glazing did not extend down the stairs).

Three significant events occurred within the space of two years, the first of which was the opening of the branch line to Seaton, on 16th March 1868. This was a single-track affair, 4 miles and 31 chains in length, and had been promoted under the auspices of the ‘’Seaton & Beer Railway’’. Intermediate stations opened along the line at Colyton (1 mile 61 chains) and Colyford (2 miles 57 chains). As a result, the main line station was renamed ‘’Colyton Junction’’, to avoid confusion with the branch line stop. From July 1870, double-track working between Salisbury and Exeter commenced, and exactly one year previously, the station had been renamed ‘’Seaton Junction’’. By this time, significant alterations had been made at the western end of the station, to accommodate a revised track layout for the incoming Seaton line. Since the branch was an afterthought, track rearranging produced a rather inconvenient operating procedure that was only rectified after complete rebuilding in the following century (more of later). The single-track from the coastal resort achieved a trailing connection with the ‘’down’’ running line; thus, only trains heading away from Exeter could access it. The junction with the branch was situated west of the station, so the incoming line completely missed the platforms. A single bay line was laid behind the western end of the ‘’down’’ platform to serve Seaton trains, and to traverse between the branch line and bay platform, a headshunt manoeuvre was required. For the benefit of passengers awaiting a branch line service, an additional 20-foot long pitched-roof canopy was established on the ‘’down’’ platform, to the west of the existing waiting shelters.

Mention has yet to be made of the goods yard, once situated on the ‘’up’’ side of the line, west of the platforms. This comprised a pair of 320-yard-long sidings, a short dock line, and a 65-foot-long goods shed. The latter was a through affair, of red brick construction, and sprouted a flat-roofed canopy from its northern elevation. The sidings were linked at their eastern ends by a pair of wagon turntables, and both tracks received a trailing connection with the ‘’up’’ line. The layout was controlled by an attractive signal box, positioned immediately beyond the western end of the ‘’down’’ platform. This emerged at the site in about 1875, and was built to a standard LSWR design, featuring a clapboard upper half, brick base, and hipped roof. This type of signal box was common to every station which originally opened with the line between Yeovil and Exeter, in July 1860.

The LSWR’s main line to the south west was a profitable route early on in its existence, and provided a more direct alternative to the older GWR trunk line between Paddington and Exeter, which at this time took a circuitous course via Bristol. The GWR sought to reduce its route mileage between the capital and the south west by means of the Berks & Hants / Castle Cary Cut-Off lines, which, by July 1906, had brought the Paddington to Exeter distance down by 20¼-miles. Improvements to the LSWR’s main line had also been forthcoming during the same period, commencing in 1901 with a comprehensive rebuild of the station at Salisbury. This was an important junction between LSWR and GWR metals, and works here were followed in 1907 by the complete rebuilding of Yeovil Junction (completed in 1909), producing a station of two island platforms separated by four tracks. The route was gradually geared towards allowing fast non-stop expresses to overtake local stopping services, and at least at Seaton Junction, the LSWR’s efforts were continued under Southern Railway auspices. 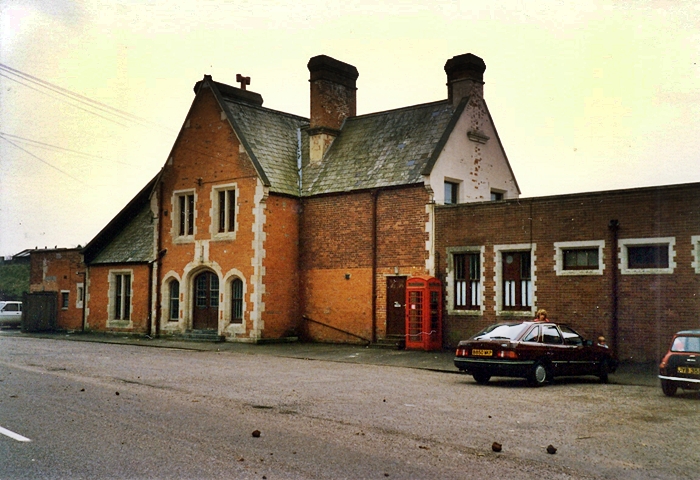 By 1955, the surviving main building was sporting an all-over crème paint scheme, but this had been stripped

down by the time of this 1989 view. On the right-hand side of the building, on the upper floor, can still be seen

a layer of this paint from the 1950s cosmetic scheme. Notice here that the roof is recessed behind the façade, 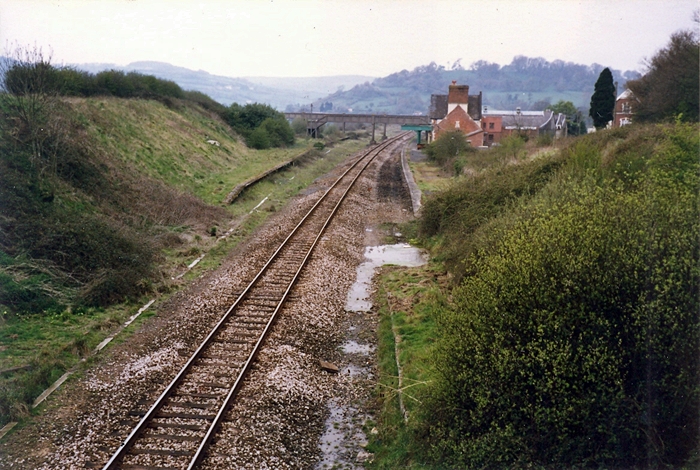 A westward view shows that the station has remained largely complete since closure, although all structures

on the ''down'' platform had been obliterated by 1970. The remaining single-track sits upon the former site

whilst the ''up'' through and ''up'' loop were retained as sidings. Mike Glasspool 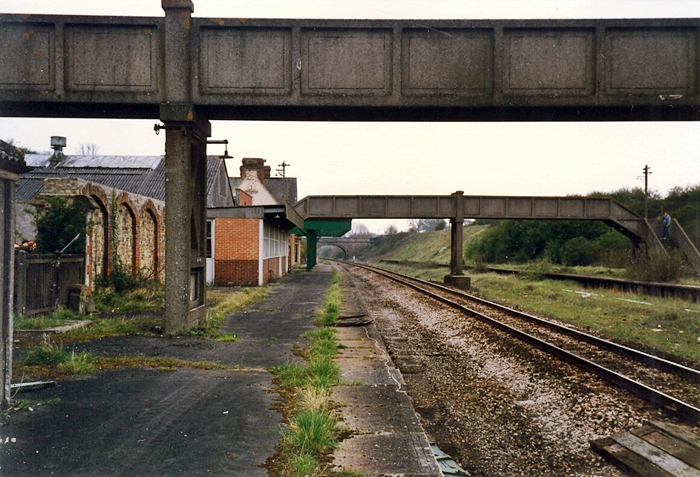 An eastward view from the former ''up'' platform shows the 1928 prefabricated footbridges very much intact.

That in the foreground still carries a public footpath, whilst that behind links the platform surfaces. In-between

the pair can be seen the former milk depot of  ''Express Dairies'' , whilst in front of this, on the left, remains the