War with Germany was declared on 4th August 1914, and soon after cutbacks were witnessed on the SE&CR network. Closures came to numerous stations within the London suburbs and across Kent, some of which were never to re-open. Passenger services were withdrawn from Sheerness-on-Sea on 8th November 1914, as a wartime economy, and the branch reverted to its pre-1883 operation into Sheerness Dockyard station. War came to a close in November 1918, but the platforms at Sheerness-on-Sea remained dormant, and exclusive use of Dockyard station continued. This situation lingered on for three years, during which time a sensible approach to train operation was devised. A direct connection between the single-track branch and Sheerness-on-Sea station was laid, which negated the requirement for trains to first reverse into the Dockyard. The trailing connection between Sheerness-on-Sea and Dockyard stations was nevertheless retained, and as a result, a triangular junction was created south of both sites. Services recommenced to the 1883 terminus on 2nd January 1922, and Sheerness Dockyard ceased to handle passenger traffic thereafter, the latter becoming dedicated to freight.

Although the Southern Railway became pre-occupied with the electrification of its suburban network during its existence, the company took significant steps towards promoting the North Kent coast – the Thames Estuary in particular – as a holiday destination. These efforts were kick-started in a big way by the opening of the single-track Allhallows-on-Sea branch line in May 1932, on the Hoo Peninsula. The SR’s optimism led to this line’s doubling in 1934, and the company also undertook works across the water, at Sheerness-on-Sea, to accommodate increased holiday traffic. Shortly before World War II, platform 1 at the latter was greatly extended with Exmouth Junction-manufactured prefabricated concrete. Upon this surface, now some 854-feet in length, were erected concrete bracket lampposts, complete with ‘’Target’’ name signs. Interestingly, platform 2 (not subject to lengthening) retained the SR’s Swan Neck lamps erected in the previous decade.

Phase 1 of the February 1956-approved Kent Coast Electrification Scheme involved extending third rail from its suburban limit at Gillingham, to the Kent Coast on ex-LC&DR routes via Canterbury East and Margate. Included within the scheme was the electrification of the Sheerness-on-Sea branch. The works included the doubling of the line between Middle Junction (Sittingbourne) and Swale, and the installation of three-aspect colour light signals throughout. The opportunity was also taken to build a completely new combined rail/road bridge over the River Swale, replacing a fragile structure dating from 1904. Construction of the new bridge commenced in January 1958 and required the slewing of the track bed north of its existing course; this necessitated the abolition of the timber Swale Halt and the commissioning of a completely new station on the revised alignment. At Sheerness-on-Sea, all three tracks were electrified and 20-foot-long sand drags were installed in front of the buffer stops. New staff rooms were provided on platform 1 and the quaint signal box was abolished. Colour light signalling on the branch took over from semaphores on Sunday 24th May 1959, controlled from Sittingbourne ‘’power box’’, and the branch was worked on the Track Circuit Block System. The ‘’down’’ siding, immediately south of platform 2, was abolished and replaced by a spur leading to a 30-foot sand drag for the platform line. Access to the latter was controlled from Sittingbourne ‘’power box’’, as were the catch points in platform line No. 1. A four-lever ground frame, electrically released from Sittingbourne, came into use south of the layout, on the ‘’up’’ side of the single-track. This controlled the crossovers between the two platform lines and the centre track. The triangular junction between Sheerness-on-Sea and the dockyard was retained, but on two sides was without third rail. The full-accelerated Phase 1 electric timetable came into effect on 15th June 1959, but trains continued to use the existing railway alignment and old bridge over the River Swale, which had been electrified for the interim. The new Swale bridge came into use on 10th April 1960, and was officially declared open ten days later. The branch was cleared for 85 MPH running, with a 30 MPH permanent speed restriction in force on the approach to Sheerness-on-Sea, due to the reverse curvature of the track.

Electrification brought an hourly direct service between Victoria and Sheerness. This operation ceased in May 1973, when the trains were diverted to Canterbury East. Direct services continued in morning and evening peaks. In the meantime, mishap had occurred at Sheerness-on-Sea: at 18:57 on Friday 26th February 1971, the 17:16 service from Victoria failed to stop before the sand drag on platform line No. 1. Consequently, the ten-vehicle train, comprising five 2-HAP units, demolished the buffer stops, which sent the leading coach – lacking front bogie – crashing onto the concourse. The leading coach proceeded to demolish the booking hall half of the timber station building, which hitherto had remained virtually unchanged from its 1883 appearance. The accident resulted in one fatality, thirteen injured, and prompted a reconstruction of the station’s southern end. Alongside the remaining ticket office section of the 1883 timber structure (which continued in use during the reconstruction) emerged an austere single-storey affair. It was of grey brick construction throughout, with a timber valance along the roof line, and was built around the northern corner of platform 1’s canopy.

Construction of Sheerness Steel Works was approved in 1969, and building work got underway in 1971. The works swallowed up the site of the former Sheerness Dockyard station and occupied the northern side of the triangular junction with the current terminus, which had once been host to Army playing fields. The then new complex also took charge of the ‘’up’’ siding at Sheerness-on-Sea, which had previously served a horse dock. A huge corrugated metal shed was erected adjacent to the siding for the storage of finished steel, and the works was commissioned in 1972.

Direct London services were wholly abolished in 1989, and thereafter the Sheerness-on-Sea branch became a shuttle operation from Sittingbourne. Since, however, these direct trains have been reinstated; there are two peak-time services between Sheerness-on-Sea and London Victoria in either direction. In more recent times, the terminus has lost its middle road: this was abolished during track relaying at the station over the weekend of 31st July/1st August 2004. 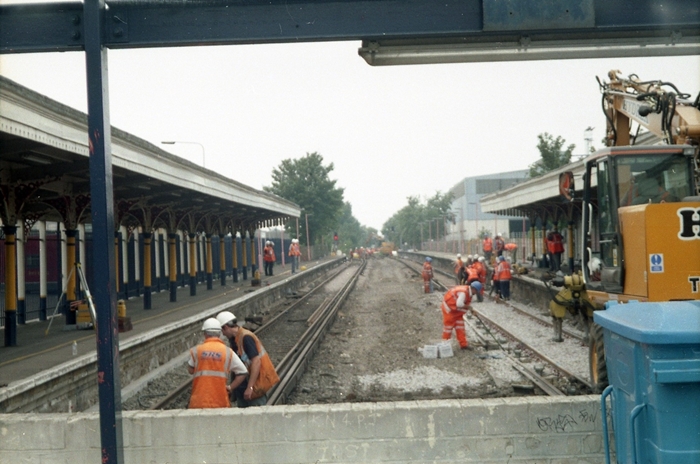 Engineering works over the weekend of 31st July/1st August 2004 resulted in the abolition of the third track between the platform lines, but the retention of catch points at the end of platform line 2 (left). The huge shed in the background, on the right, was part of Sheerness Steel and was used to house completed coil reels awaiting despatch. © David Glasspool 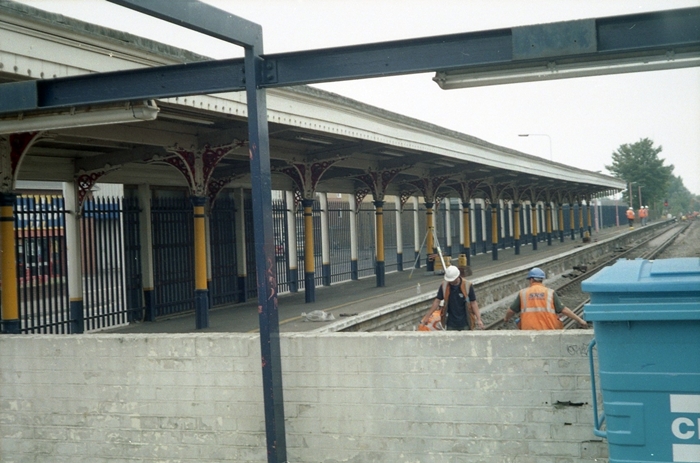 Ornate canopies remain on both platforms, but the intricate timber valances have been sawn off. The metal framework in the foreground occupies the area which once hosted the timber station building. This site now forms an open air walkway between platforms. © David Glasspool 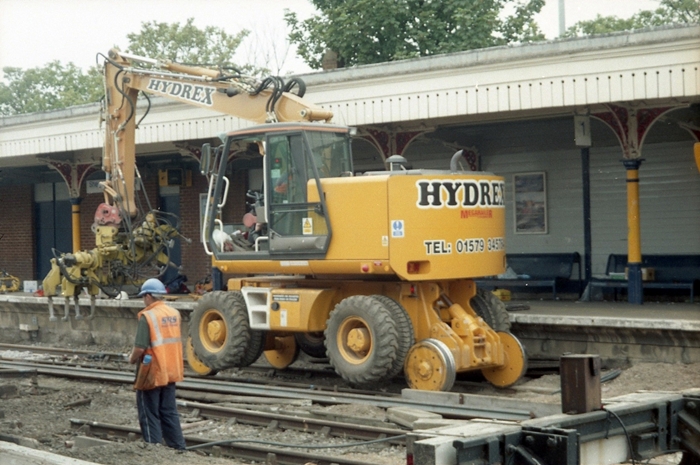 Seen alongside platform 1 is a ''Hydrex Megarailer'', a machine often seen during engineering works. It can have a variety of attachments on its arm, allowing it to perform tasks ranging from rail and sleeper removal, to ballast laying. Behind can be seen the traditional timber backing of the platform and ornate canopy brackets. © David Glasspool 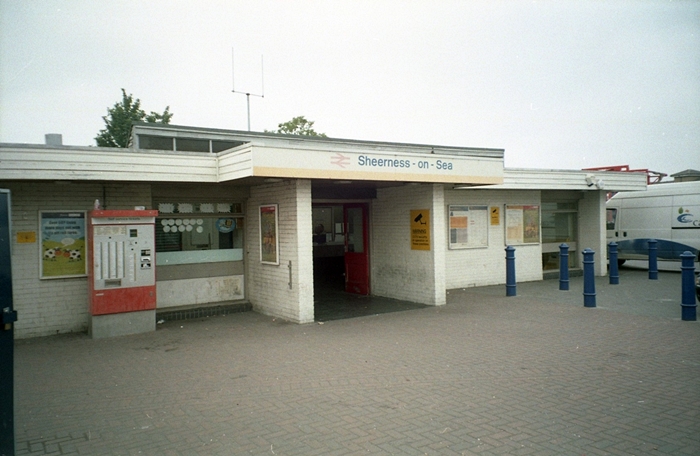 The main station building, which hugs the terminating end of platform 1, is of typical uninspiring 1970s British Rail architecture. It was constructed in the aftermath of the 1971 incident, which saw half of the ex-LC&DR timber building demolished by the leading vehicle of a 2-HAP formation. © David Glasspool