Boring of the Channel Tunnel commenced on 15th December 1987, but previously, in 1985, the specification for a new international passenger terminus in the capital was finalised. The new station had to meet the following criteria:

One existing site that met most of the above requirements was the country’s largest terminus, Waterloo. As a result of a rebuild completed by the London & South Western Railway in March 1922, the station was formed of two distinct sections which essentially housed standalone operations. On the north western side of the terminus were those platforms dedicated to Windsor services, Nos. 16 to 21. These were housed within a ridge-and-furrow extension added to the original Waterloo station during 1884/1885, and this was the only remnant of the pre-1922 site. All other services used platform Nos. 1 to 20 underneath the main overall roof, the latter comprising dimensions of 540-feet by 520-feet. Proposals outlined wholly abolishing platforms 16 to 21, replacing these with four new platform surfaces within the ‘’main line’’ part of the station, and re-signalling the track layout to feed the Windsor lines into the 1922 trainshed. Demolition works would be extensive and involve the following:

Work began in 1989, first by the demolition of the aforementioned cab road and the insertion of an additional pair of platform faces serving a double-track. At the southern end of the cab road had also existed a loading dock served by a pair of short sidings. These modifications required completion before the total closure of the ‘’Windsor’’ platforms, to provide the ‘’Main Line’’ station with enough capacity to deal with the transferred services. By July 1990, the ''Windsor'' platforms had been boarded off from the rest of Waterloo station. On 30th September of the same year, Waterloo signal box closed, and control was passed to a temporary panel. Dismantling of the 1885 trainshed was already underway by November, and demolition of the supporting brick arches formally began when the then Transport Minister, Roger Freeman, ceremonially used a pneumatic drill on that side of the station on 11th December 1990. Demolition of the ‘’Village’’ block permitted the insertion of a further two platform faces underneath the extent of the main trainshed.

The project was priced at £100 million and essentially, the new terminal structure would consist of four levels: platforms; departures / arrivals; customs and immigration; car park (basement). The platforms would be protected by a distorted curved roof designed by architects ''Nicholas Grimshaw & Partners'', measuring a width of 55-metres at its widest point, reduced to 35-metres after narrowing at the ''country end''. By British standards, the international trains to be accommodated here were incredibly long, comprising no less than twenty vehicles (including power cars), thus the platform lengths were impressive: 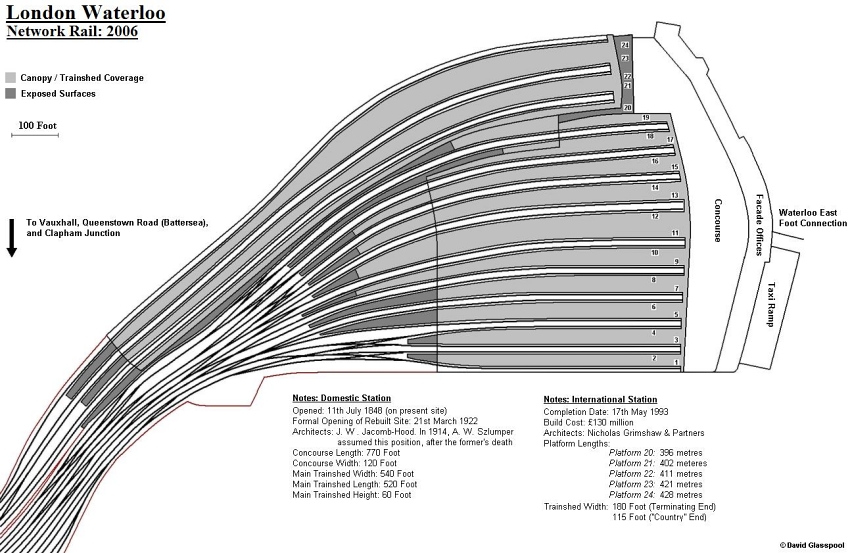 2005 track layout, complete with international station platforms. Click on the above image for a full-size version. © David Glasspool 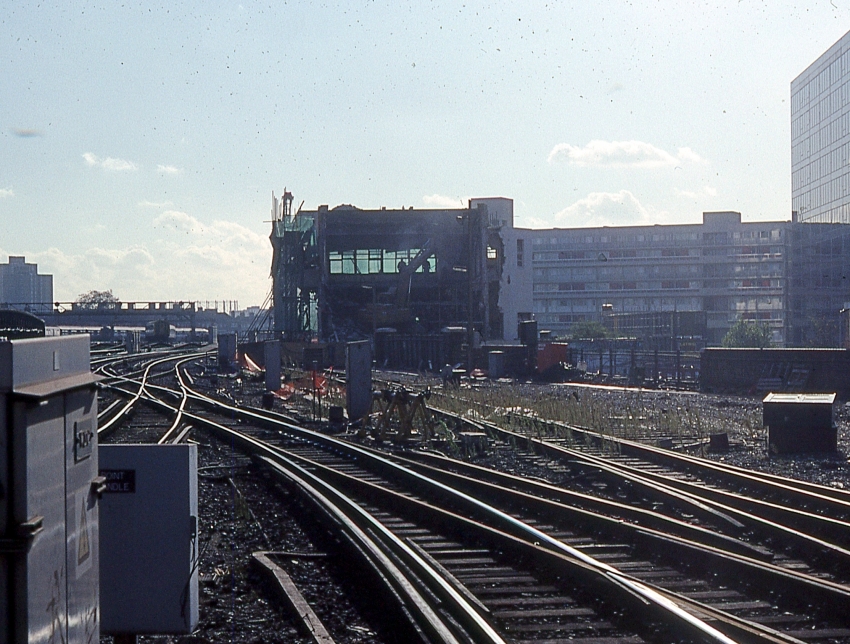 Destruction of the 1936 signal box, which had closed a month prior to this photograph, is well advanced in this view. The silhouette of a JCB digger can just be picked out within the middle of the remaining structure. © David Glasspool Collection 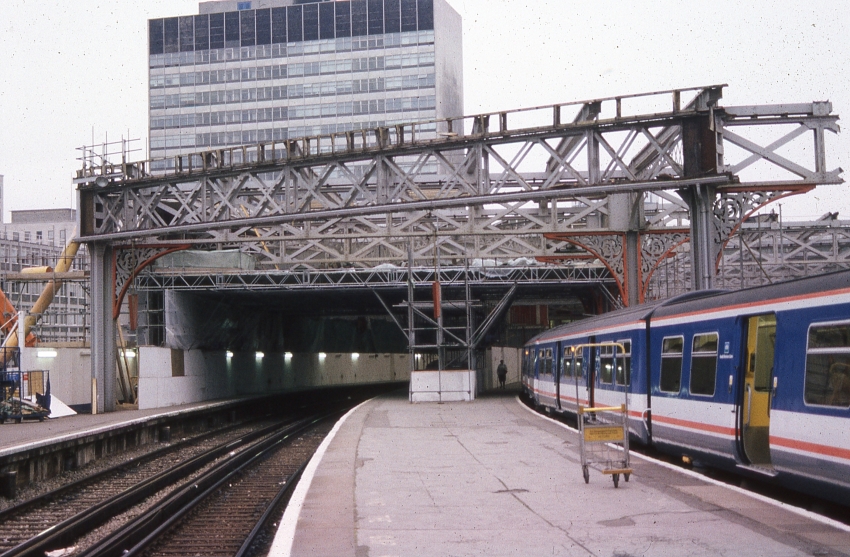 The trainshed over the "Windsor" platforms was the oldest part of Waterloo, having survived the LSWR's major rebuild of the terminus that was completed in 1922. It finally succumbed as part of the Eurostar terminal project, and the above view shows the lattice framework and ornate brackets being dismantled. © David Glasspool Collection 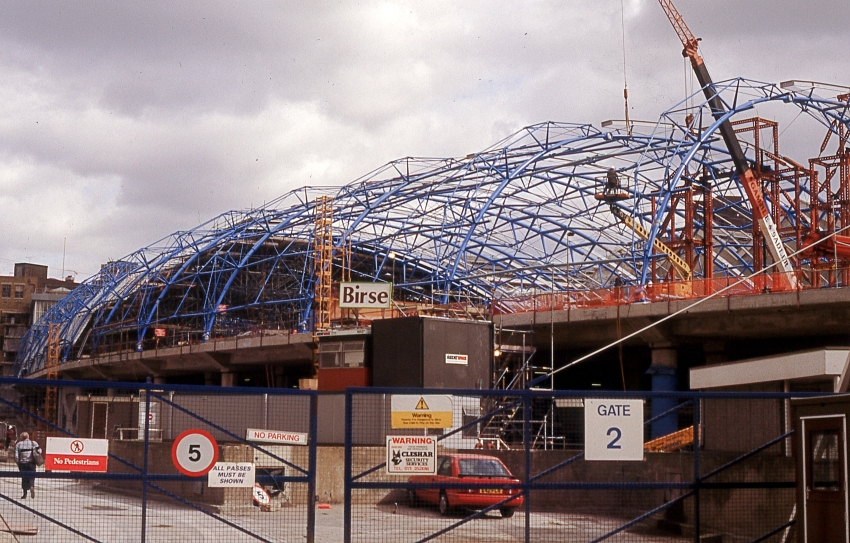 The framework of the trainshed is seen being pieced together in this north easterly view towards the buffer stops. The trainshed was designed in a way to flex in response to the movement of the trains. © David Glasspool Collection 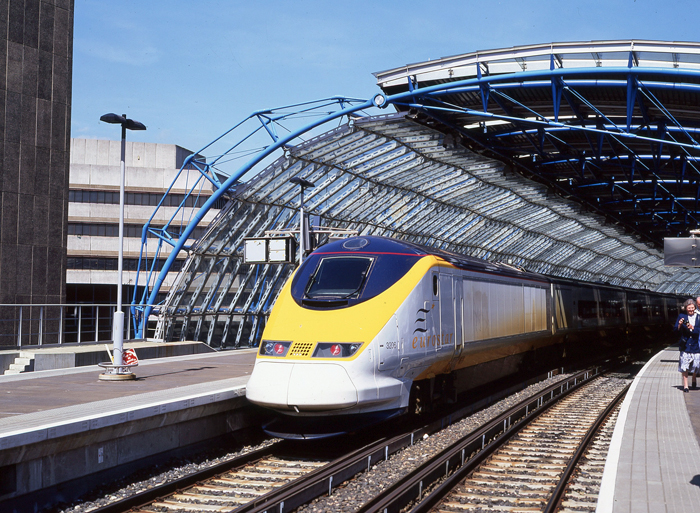 The distorted curved roof is seen to good effect in this view of Class 373 half set No. 3206, pairing with No. 3205, at platform 23. Note the short platform for train crew on the far left. © David Glasspool Collection 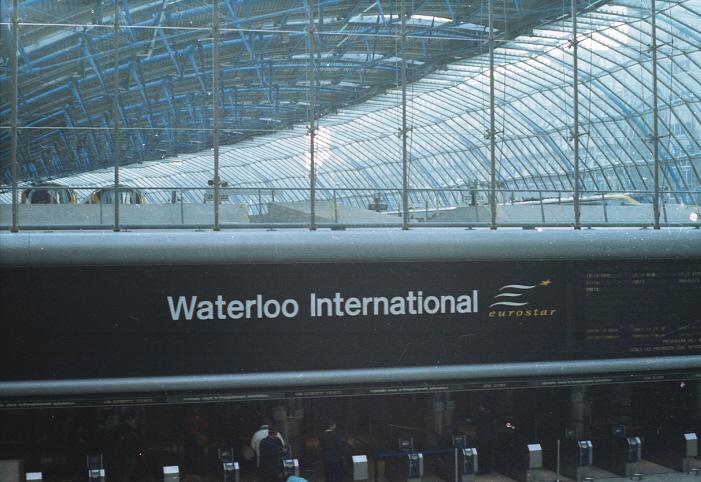 The curved trainshed is constituted of steel structural members, with weather protection provided in the form of strengthened glass. A pleasing aspect of the design criteria was to make the station as light and airy as possible, which always helps to create a pleasant environment. In this 1995 view, the entrance can be seen below - it is linked to the platforms above by both lifts and escalators. © Mike Glasspool