Before the coming of the LC&DR at Ashford (initially in the form of the ''Maidstone & Ashford Railway''), another independent concern had received Parliamentary approval for the extension of an existing line between Brighton and Lewes, to Ashford. Known as the ''Brighton Lewes & Hastings Company'', the concern proposed a coastal route between Lewes and Ashford, thus incorporating the resort of Hastings. Although the SER had also put forward a proposal of an alternative route to Hastings in response to this, which would leave their main Dover trunk route to the west of Ashford at Headcorn and follow a southerly heading towards the coast, Parliament had preference for the coastal line of the Brighton Lewes & Hastings Company. All was not lost for the SER, however, and the company were granted powers to operate the stretch of line from Ashford to just west of Hastings when it was finally completed. The London Brighton & South Coast Railway would operate the remaining distance to Lewes and Brighton. The line from Lewes to Ashford via Hastings was fully opened on 13th February 1851.

At a number of locations which the SER considered strategically important, four tracks were provided between the main through platforms, Ashford unsurprisingly being one of these. The station here was very much like the one established at Tonbridge, although in addition to the two through platform faces, a pair of eastward-facing bay lines, on the ‘’up’’ and ‘’down’’ sides respectively, were in evidence from the opening of the extension to Folkestone.  Platform weather protection here was provided in the form of two separate pitched-roofs. On each side of the layout, these stretched from the inner edges of the through platforms, over to the outer edge of the bay track. Adjacent to the ‘’down’’ bay line were four carriage sidings and again, these were protected by a pitched roof, albeit wider than those of the platforms. Finally, alongside the covered carriage accommodation were about half a dozen goods sidings. The ‘’up’’ side bay line laid adjacent to a trio of uncovered rolling stock sidings, these also being eastward-facing like their counterparts on the ‘’down’’ side. To coincide with the opening of the Tonbridge cut-off line via Orpington and Sevenoaks in 1868, Ashford received some structural alterations. At the western end of the layout, a four-arched road bridge was erected across the tracks (identical in design to the contemporary example at Tonbridge), which provided an alternate passage between the platform surfaces - a covered lattice footbridge was also in evidence. Single-storey pitched-roof red-brick structures were built on both sides of the layout, sandwiched in-between the end of the bay lines and the road bridge, and were of the same basic design implemented at Tonbridge and, later, Shorncliffe (Folkestone West). The platform pitched roofs of the first station were retained, but these did not extend in front of the new station buildings. Therefore, the red-brick structures were instead adorned with standard canopies with flat roofs. Although the LC&DR had reached Ashford in 1884 and built a small engine shed alongside its terminus, the town still remained very much an SER establishment and the latter's extensive works site overshadowed the former's presence, right up until the two rival companies amalgamated into the South Eastern & Chatham Railway in 1899. This initial amalgamation led to the closure of the LC&DR's Ashford West station and shed on 1st January 1899, locomotives subsequently transferring to the much larger SER accommodation.

By the time of the 1923 Grouping, Ashford was served by no less than four separate routes: London to Dover via Tonbridge; London To Dover via Maidstone; Ashford to Margate via Ramsgate; Ashford to Brighton via Hastings; the junctions of these were controlled by five SER-designed two-storey signal boxes. The SE&CR had also installed very ornate and stylish ‘’W’’ shaped canopies to replace the original overall roofs over the platforms. The canopies were virtually to the same design as the sole surviving example of the type on Margate’s island platform, albeit a little wider. The flat-roofed canopies of the station buildings on both sides remained intact, but these received curved roofs, and the covered accommodation over the sidings was removed. These revisions were followed in 1927 by the SR's planning of a large new engine shed to replace the existing site of SER origin, which by now had been far outgrown. This had been on the cards since 1899, but the SE&CR evidently did not implement its proposals. The 1927 SR plans outlined a ten-road concrete structure - the building material of which would become customary for this company’s structures throughout its existence - located within the apex of the Ashford to Dover and Ashford to Canterbury lines. Eight of the ten shed lines would be dead-end, whilst the remaining two would terminate some distance to the east of the building. The then modern depot opened in 1931 and became the main shed in the area, those at Maidstone, Canterbury, Dover, Ramsgate, Tonbridge, St Leonards and Folkestone all coming under its wing. 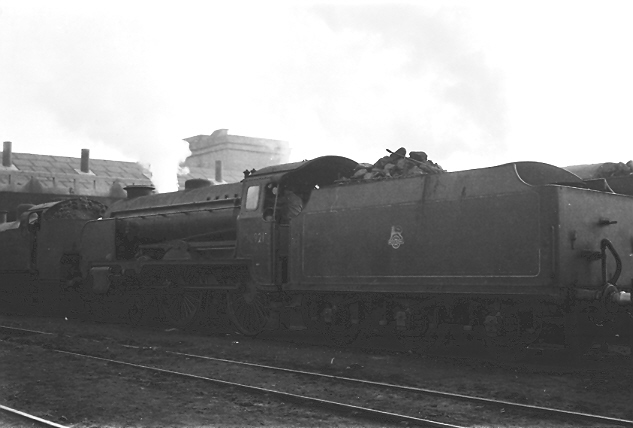 When the Kent Coast Electrification was in full swing between 1959 and 1962, a number of engines

were transferred to the South Western Division where steam was being phased out much less rapidly.

code 74A, Ashford became sub-shed to Stewarts Lane in 1958, being re-designated 73F. 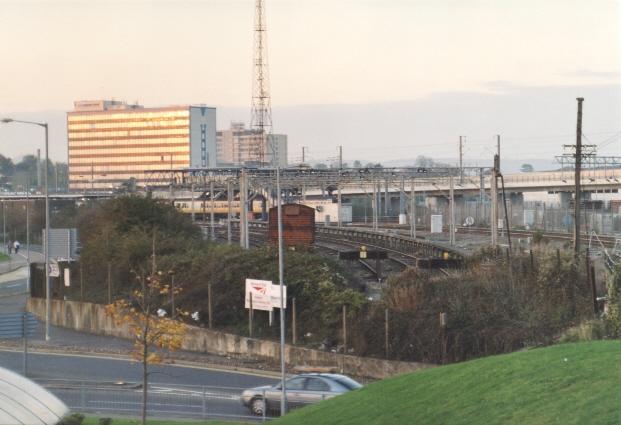 into the station. A trio of sidings are in the foreground, an old gem - a ventilated van - being at the

buffers of the most left-hand line. The catenary gantries over these sidings actually date from the

had become totally redundant by the mid-1970s. The elevated track bed in the background is that of 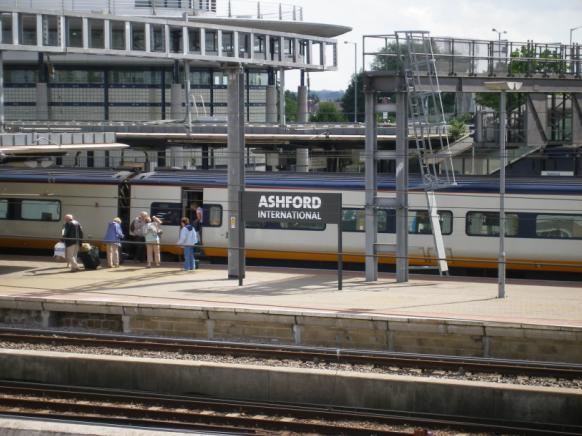 On 22nd June 2007, the platform signs proudly proclaim ''Ashford International'' - but for how

long will the station be ''international''? The November opening of Ebbsfleet International will

result in Ashford losing all Eurostar services which serve Brussels, and over 50% of its existing

trains to Paris will now be transferred to the new station in North West Kent. As Eurostar aims

to cut costs (the total closure of Waterloo International forming part of this exercise), there are 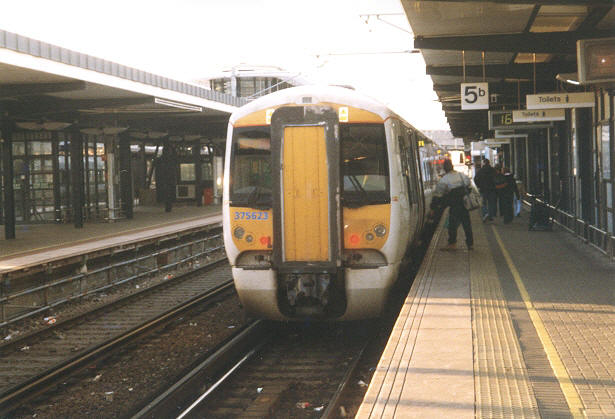 of the formation heading northwards to Ramsgate via Canterbury West, and the other half going

to Dover Priory via Folkestone. Platform numbers are accompanied by sub-letters because of

this, as evidenced in the above view. David Glasspool