The first line to Dover was that of the South Eastern Railway's, which ran from London Bridge to Redhill, thence onto Tonbridge and Ashford, before heading south eastwards to Folkestone and the English Channel Port. This line was opened piecemeal, through traffic from London to Dover commencing on 7th February 1844. For approximately one and a half decades, the SER enjoyed a monopoly of all traffic between the capital and Dover, although during this, in 1853, a potential threat to their railway "empire" emerged. In this year the "East Kent Railway" was formed (endorsed by the town of Faversham) to provide the area of North East Kent with a railway connection to the capital. By 25th January 1858, the East Kent had its first railway operation between Faversham and Chatham, with plans to extend further west to Strood, at which point a connection could be made with the SER's North Kent Line. Parliamentary approval permitted the East Kent Railway to build a new line from Chatham to London, the SER claiming its North Kent Line was already running at full capacity, and in 1860 reached Bromley in the west and Canterbury in the east. In 1859 the organisation's name had changed to the "London Chatham & Dover Railway" and the concern had its sights set firmly on providing an alternative - and shorter - line to Dover than the existing SER route. LC&DR trains terminated at Canterbury East for little over a year, having first arrived on 9th July 1860, until the extension to Dover was opened by the company on 22nd July 1861.

The LC&DR's first station here was christened "Dover Town", this being a terminus for some four months until an extension to the harbour station was completed on 1st November 1861. Dover Town became "Dover Priory" in July 1863, named after a group of adjacent monastic buildings, and it appears that similar to the layout at Chatham, the LC&DR made the best use of what was a comparatively cramped site. Priory station was situated deep in the chalk terrain of the Channel Port town, access being made by means of two double-track tunnels either side of the layout. Latitudinal layout expansion would not later be possible and sideways extensions would also be severely very limited, but since the site was both at the end of the LC&DR's main line and at a strategically-located and historically important town, the opportunity was taken to incorporate everything, from a motive power depot and a goods yard, to a carriage shed and, of course, the platforms themselves. In this section, the latter will be looked at first.

In their early years, both SER and LC&DR companies were fond of their overall roofs and examples had appeared at the former's Canterbury (West) and Deal stations, and at the latter's Sittingbourne and Canterbury (East) layouts. The LC&DR's Dover Priory transpired to be no exception on this count and indeed, a triangular trainshed was installed over a double-track and the respective platform faces. Many trainsheds, such as those at the aforementioned intermediate stations, were usually plain and boring to the point of ugliness, merely consisting of a basic metal frame supporting soulless cladding – they even lacked façades, revealing the sometimes unsightly framework. However, greater pride was seemingly taken when designing the example at Priory, and the resultant was a fairly elaborate structure, 200 foot long, comprising a glazed façade, complete with the ornate valance usually associated with standard platform canopies. All sides were enclosed and the frame clad with timber; naturally, the apex of the roof was elevated to provide ventilation. The main station building, based on the example still in existence at Canterbury East, was situated on the trainshed's eastern elevation.

The engine shed here was an important LC&DR depot since coming into use with the station in July 1861. It was a dead-end arrangement, at just over 200 foot in length, comprising two symmetrical pitched sections, four roads, and was situated on the land to the west of the main station. The depot came with a full complement of facilities: attached to its western elevation was a fitting shop (which was served by a single-track), and this itself was attached to a boiler house and offices. A turntable and coal stage were positioned at the most north western point of the layout, in the company of a pitched-roof water tower. The shed was a jack-of-all-trades, for it provided locomotives for scheduled passenger services – short and long distance – freight turns and indeed, the prestigious boat trains. After the formation of the SE&CR, the ex-SER sheds in the Dover vicinity were closed and their functions subsequently transferred to Priory, resulting in a larger locomotive allocation. 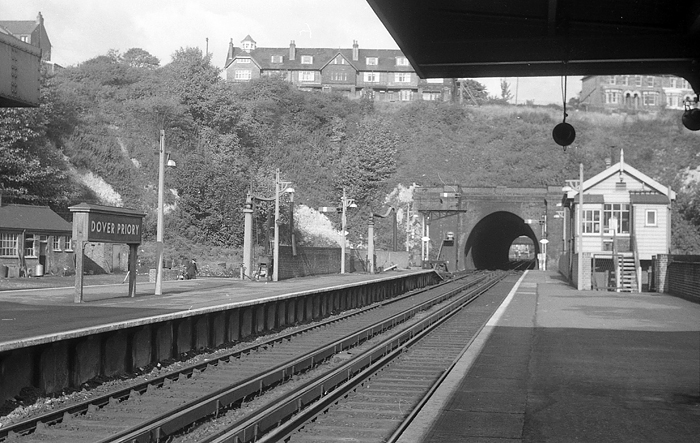 A northward view towards the 158-yard-long Priory Tunnel shows a scene which is still familiar today. Of course, long-disappeared details include the pair of water columns, semaphore signals, concrete bracket lampposts with hexagonal lampshades, and the bulky station name board on the island platform. Today, the canopies and signal box (albeit disused) still exist, as does the brick-built office on the far left, the latter of which is now used by "Network Rail". © David Glasspool Collection 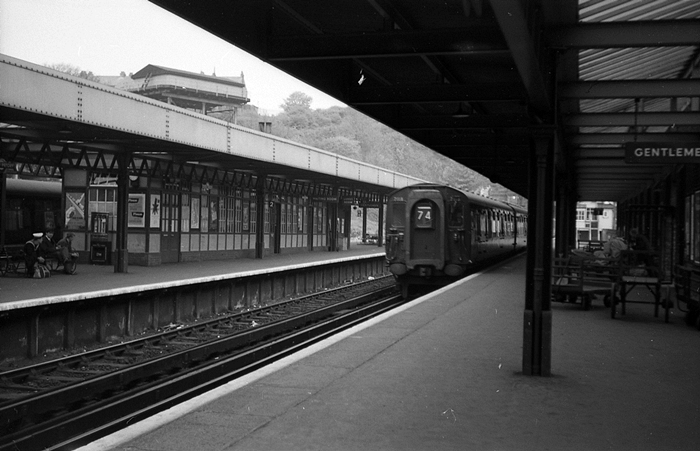 A then new 4 CEP is seen entering platform 1 with a service from Victoria: the next and final stop will be Dover Marine. In the background, to the left, behind the canopy of the island platform, can be seen the tank of the water tower. On the right, in the distance, can also just be seen the end of the signal box. © David Glasspool Collection 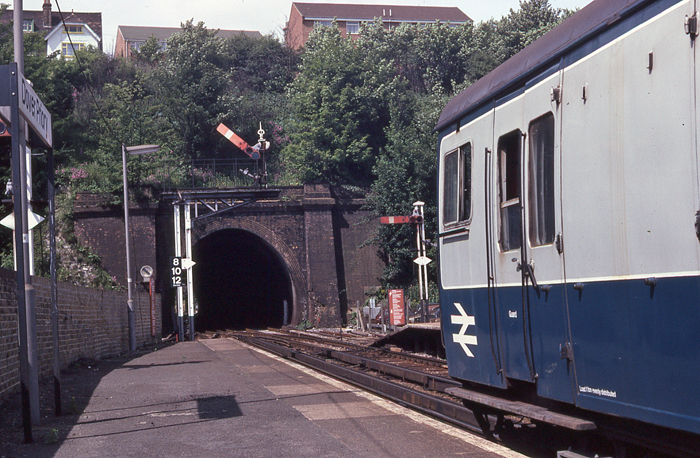 Ready for the "off" to Victoria. The semaphore signals had less than a year of operation left, being decommissioned in the following April. The semaphore bracket post seen here, at the northern end of the station, was re-used to support colour lights and is still in evidence today. © David Glasspool Collection