This is one of a number of sites on the route from Swanley to Ashford which has stood the test of time particularly well. Charing came into use with the ''Maidstone & Ashford Railway’s’’ 18¾-mile eastward extension from the county town to the ‘’home’’ of the SER on 1st July 1884. Those stations east of Maidstone could directly trace their design traits back to the structures of the original 1862-opened Sevenoaks line. Indeed, it would certainly appear to be the case that such buildings were based on a modified design of Bat & Ball’s main structure – they are undoubtedly worthy of comparison. Six stations in total were commissioned on the 1884 line: Bearsted, Hollingbourne, Harrietsham, Lenham, Charing, Hothfield, and Ashford (the London Chatham & Dover Railway's terminus). The sites listed featured large two-storey pitched-roof main buildings. However, there was a significant difference among the group: Bearsted, Hollingbourne, Harrietsham, and Hothfield were all constituted of the crème brickwork used extensively by the LC&DR along the original ‘’Chatham’’ main line of 1860. However, the remaining sites instead demonstrated wholly red brick structures, reminiscent of those stations west of Maidstone, at Malling (West), Borough Green, and Otford. The red brick buildings on the 1884 extension are also more substantial than their crème brick counterparts.

As already touched upon, Charing, being red-brick in nature, featured its substantial main building on the ‘’down’’ platform. Seemingly rural stations commanded such large structures in light of the Station Master’s accommodation being amalgamated with the ticket office and passenger waiting facilities. Indeed, when the LC&DR opened its Gravesend branch in 1886, the sites at both Southfleet and Rosherville were provided with large two-storey houses which were isolated from the stations themselves. Thus, the station buildings at these locations were comparatively modest, demonstrating only a single storey. As per all intermediate sites along the 1884 Ashford extension, Charing was graced with an attractive brick-built sloped-roof waiting shelter, this featuring on the ‘’up’’ side. This itself demonstrated a rectangular canopy – which matched the design of its larger counterpart on the ‘’down’’ platform – in addition to featuring the LC&DR’s distinctive arched window frames in both eastern and western wall elevations, complete with glazing. Attention should be drawn to the fact that no station along this section of line was provided with a footbridge; passengers utilised track foot crossings, the one at Charing being situated at the western extremities of the platform surfaces.

Rural the station may have been, the layout here was in fact quite extensive. Every station on the 1884 extension was provided with freight facilities, which included the once common goods shed. Seven sidings were once evident on the ‘’down’’ side at Charing, six of which were westward-facing. One of these tracks formed a dock line, which terminated behind the ‘’down’’ platform, shortly before the main station building was reached. Of the remaining five, all trailed off from the running lines (of which there were direct connections with both ‘’up’’ and ‘’down’’ tracks) at an angle of about forty degrees. Finally, the seventh siding was to the contrary, it being eastward-facing. It did, however, have direct facing connections with both the aforementioned goods yard and the ‘’down’’ running line. The ‘’up’’ side was not without storage capacity, and a westward-facing refuge siding of considerable length (approximately 246 yards) was in evidence, this terminating behind the ‘’up’’ platform. As per the original Bat & Ball line and the Otford to Maidstone extension, contractors Saxby & Farmer were drafted in to signal the 1884 route to Ashford. One of this company’s attractive two-storey high signal cabins, complete with a brick base and timber upper half, was positioned just beyond the western end of the ‘’up’’ platform. 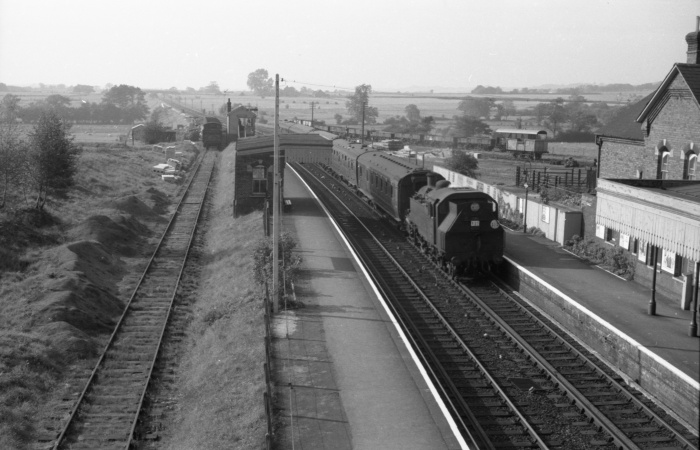 An Ivatt "Mickey Mouse" 2-6-2 Tank Engine is seen entering the "down" platform with a Maidstone East to Ashford service. The conductor rails had been stored in the "four foot" and insulators were in evidence beside the tracks, but neither had yet been fixed in place for electrification. The goods yard, in the right background of the photograph, was home to a series of wagons — including a guard's van — on this day, in addition to materials for electrification works. The railings beyond the main station building, behind the "down" platform, marked out the cattle pens. The "up" refuge siding, on the left, was also partly occupied by wagons and, to its left, flanked by concrete components, again for electrification works. © David Glasspool Collection 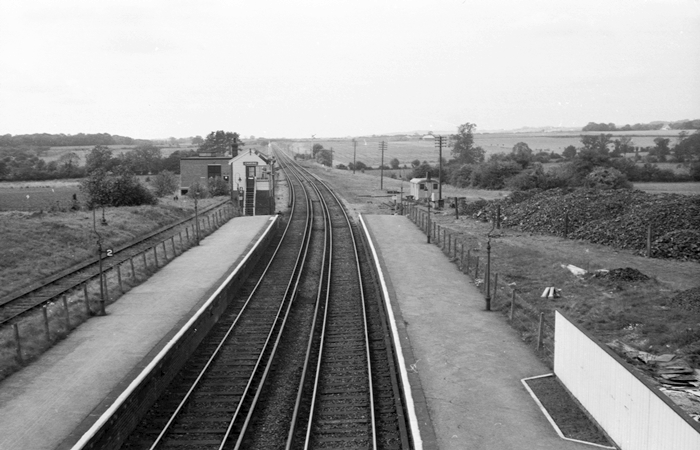 By the time of this view, again looking towards Maidstone from the footbridge, the tracks of the goods yard had been lifted, but the "up" refuge siding remained in place, now with an electricity substation alongside. The Saxby & Farmer signal box still controlled mechanical signalling, and both platforms were still equipped with Swan Neck lamps and SR "Target" name signs. © David Glasspool Collection 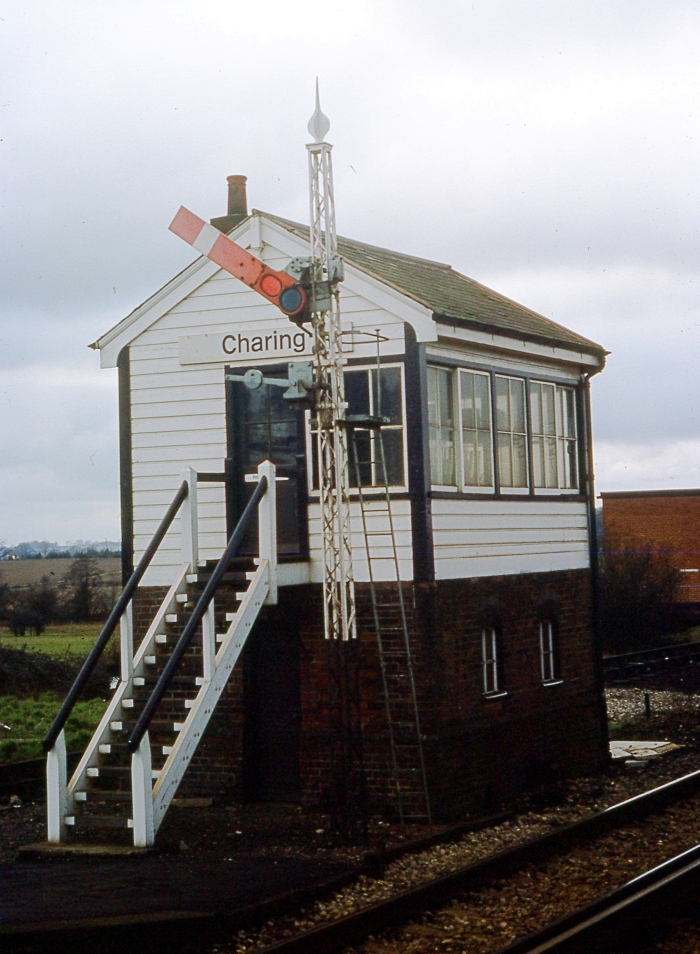 Signalling contractor Saxby & Farmer was used extensively by the London Chatham & Dover Railway. The company's most familiar designs of signal box are arguably those which comprised the hipped slated overhanging roof, like that which once existed at Barming. However, the type pictured above was adopted by the contractor for those signal boxes situated at intermediate stations east of Maidstone. The cabin was in fine fettle at this time, and remained in use for another seven years. Note the ornate finial of the "up" starter and, behind the signal box, the "up" refuge siding. © David Glasspool Collection 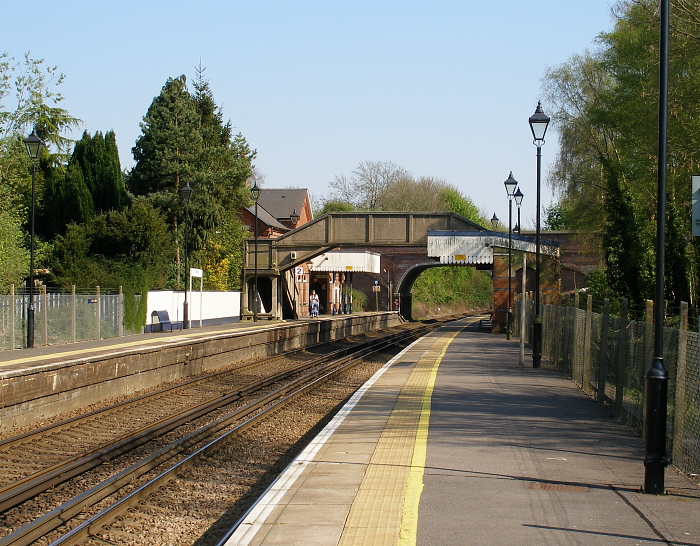 An eastward view shows a number of interesting features. Firstly, the attractive waiting shelter is in view - note the chunks taken out of the canopy, to allow for the passage of large container wagons. The window indentations are still much in evidence, although have for long been bricked up. Sandwiched in-between the main station building and the waiting shelter, straddling the tracks, is the concrete footbridge of 1961, whilst behind that is again the rebuilt bridge arch. This view also indicates just how tall the lamp posts actually are. The footbridge was replaced by a new one in late 2013 situated adjacent to the road bridge. © David Glasspool 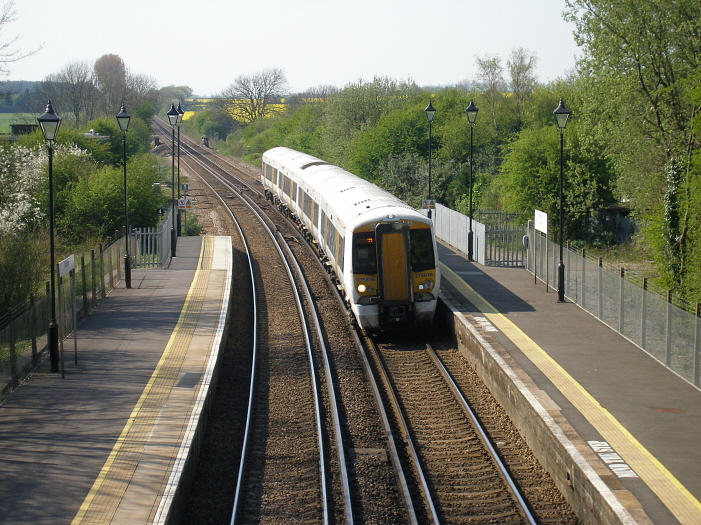 The recent platform extensions, complete with short sections of new palisade fencing, are witnessed as Class 375 No. 375816 trundles in from Lenham with a stopping service. © David Glasspool