This was a large, spacious, and impressive station, located within a maze of lines upon a tight triangular junction between the routes from Folkestone and Dover Priory. The origins of the terminus and general railway expansion in the Dover area derive from a need to cope with ever-increasing traffic, both local and boat services. Indeed, many capacity issues upon both SER and LC&DR networks were properly addressed after the formation of the SE&CR. The SER had initially commenced through running to Dover on 7th February 1844, after an eastward extension from Folkestone, which involved taking the railway along the dramatic coastline of Folkestone Warren. This had witnessed the blowing up of sections of chalk cliff with gunpowder, and boring three tunnels:

The SER ran into what later became known as ‘’Dover Town’’ station, and between here and Shakespeare Tunnel, the double-track line was elevated upon a wooden framework. The SER’s Town station was a large affair, comprising five tracks entering the terminus from the west, all of which were protected by a large twin-span overall roof. Substantial three-storey-high railway offices backed onto the rear of the platform lines, these being constituted of the customary yellow brick, lined at the edges with stone. Extension beyond the terminus took place in 1861, by means of a single track exiting the rear (east) of the layout, veering southwards onto a stone-built pier head. The latter, known as the ‘’Admiralty Pier’’, carried a double-track and allowed trains to come directly alongside steamer boat services to France. In July of the following year, the LC&DR commenced through running between Victoria and Dover Priory. Also in 1861, after the boring of a 684-yard-long tunnel southwards through the Kentish chalk, from Priory station, the ‘’Chatham’’ line was brought closer to the earlier SER station. The LC&DR opened ‘’Dover Harbour’’ on 1st November 1861, which was a terminus affair comprising two platform faces, separated by three tracks, all of which were protected by a single-span triangular-shaped trainshed. Just like the SER’s Town station, Dover Harbour ceased to be a terminus proper when a single-track was taken beyond the original buffer stops, down to the Admiralty Pier. LC&DR services commenced to the pier on 30th August 1864, where separate platforms were provide for both ‘’Chatham’’ and SER companies. The platforms were arranged in an end-to-end fashion along the same section of track, rather than serving their own separate lines upon the pier. The LC&DR’s southward extension from Dover Harbour formed the second side of what would later become a triangular junction – the SER had created the first southern side of the arrangement, as a result of its initial 1860 opening of the short section of line between Dover Town and Admiralty Pier.

On 15th June 1881, the SER and LC&DR opened the ''Dover & Deal Joint Line'' – a rare example of the frenetic rivals cooperating. To allow the SER direct access to this line from its trunk route via Folkestone, a double-track spur (the ‘’Hawkesbury Street Curve’’) between Dover Harbour station and the Dover Town approaches came into use on the same day – the triangular junction was now complete. The SER was granted running powers over LC&DR metals through Priory station, and a number of local services now bypassed Dover Town. However, to compensate for this, additional platform surfaces were brought into use upon the connecting spur. The area in-between the two sites was already heavily built up, but early maps suggest that demolition in the locale, to accommodate the spur, was surprisingly modest. At the ‘’Chatham’’ end of the spur, signalling was installed by contractors Stevens & Sons.

The formation of the SE&CR Joint Managing Committee on New Years Day 1899 marked the beginning of a new era of railway expansion and improvements on the erstwhile independent networks of the SER and LC&DR. Of prominence during this company’s tenure was the St Johns to Orpington quadrupling works, between 1900 and 1905, which involved physically connecting both Tonbridge Cut-Off and ‘’Chatham’’ main lines in the vicinity of Chislehurst. In the Dover area, alterations began with the closure of the platforms upon the connecting spur between SER and LC&DR lines, in 1903. Subsequently, in 1912, major works began alongside the Admiralty Pier, to create an artificial platform within the water, on which a whole new terminus station was to be built. The latter was to be a spacious affair, dedicated to boat traffic only, and would permit the closure of existing station sites. Creating the platform involved dumping large quantities of chalk into the water immediately east of the Admiralty Pier. As it later transpired, the Admiralty Pier was not demolished, but rather, was absorbed into the new works to become the western side of the sea platform. Construction of the terminus commenced in 1913, and by the outbreak of the Great War in August 1914, the majority of the building work had been completed. A splendid vaulted train shed roof, comprising seven spans of varying widths, had been erected. The station measured 170-feet in width, and at its longest point stretched to 800-feet. The well-covered terminus comprised four 693-foot-long platform faces, arranged in the form of two spacious islands of concrete construction.

Wartime economies saw the closure of the ex-SER Dover Town station in 1914, which was never to reopen, but the retention of the ex-LC&DR Harbour and Priory stations, to which all services were now diverted to. The demise of the Town station was coupled with the closure of the three-road engine shed adjacent to the Hawkesbury Street Curve, and the concentration of the area’s locomotive allocation on the depot at Priory. The withdrawal of boat services on the outbreak of war saw that the semi-complete SE&CR terminus had no passenger traffic to serve. Despite its unfinished state, the station was quickly brought into use on 2nd January 1915 for military traffic, initially in the form of ambulance trains. Although the trainshed was virtually complete by this time, a significant feature still lacking was the marvellous stone façade which now graces the structure’s landward elevation. Completion of building works came after the cessation of war in November 1918, and the first passenger boat trains commenced to the terminus on 18th January 1919, the station being christened ‘’Dover Marine’’.

Attractive single-storey red brick offices, complete with war memorial, were built upon the platform surfaces, and both platform islands and the exit were linked by a lattice footbridge at the northern end of the terminus, located within the trainshed. The incorporation of the SE&CR’s main war memorial here was unusual, for the other large railway companies erected these at their main termini in London. The layout upon the sea platform had grown to an extensive arrangement of tracks, numerous sidings having been brought into use to handle substantial levels of freight traffic during the war period. Dover Marine was controlled by an SE&CR-designed 120-lever signal box positioned to the west of the station, immediately adjacent to the tracks from Priory. The signal box comprised a substantial brick base and was in fact a much larger version of the signal cabin which still exists at Folkestone Harbour, demonstrating traits of those early Saxby & Farmer products. A 455-foot long enclosed glazed footbridge was suspended above the double-track of the former Admiralty Pier, and this took passengers over the complex approaches from the Folkestone direction. A physical connection was also made between this footbridge and the Lord Warden Hotel. The latter was a four-storey colossus, the main section of which was built upon a floor plan of 130-foot by 120-foot. Originally opened in 1851, the hotel was built on a site immediately behind the SER’s Dover Town station.

Locomotive facilities at the site initially comprised just a turntable and cylindrical water tank, located behind the signal box. As previously mentioned, on the closure of Dover Town, the locomotive allocation was concentrated on the existing depot at Priory. However, the inadequacy of the Priory site was emphasised after completion of the SE&CR’s Dover area enlargement works, and a new improvement scheme was soon set in motion after the formation of the Southern Railway. The SR devised a modernisation programme for the Dover area, which included a comprehensive rebuilding of Priory station, the closure of Harbour station, and the building of a new motive power depot. The proposals got underway in 1924, with the confirmation of a 280-foot-long five-road locomotive shed, to be built to the west of Dover Marine, alongside the running lines from Folkestone. As per the construction of the twelve-acre platform for the Marine station, large quantities of chalk were dumped into the sea, beside the former site of the ex-SER’s Dover Town, to reclaim enough land for a spacious complex. The depot came into use during 1928, comprising four eastward-facing dead-end tracks, a single through track, and a sixth line which terminated within an adjacent repair shed. The provision of a 65-foot turntable at the site resulted in the removal of that which resided behind the signal box at Dover Marine, and the water tank there also disappeared. The commissioning of the engine shed, which at 2007 prices cost approximately £7,767,500 to build, allowed the closure of the shed at Priory station, allowing the site there to become part of an enlarged goods yard. Dover Harbour station was subject to closure on 10th July 1927, all local traffic being concentrated at Priory and boat services being served exclusively at Marine station. Other improvements in the Dover area during the SR’s tenure included the rebuilding of the elevated track bed east of Shakespeare Tunnel from wood to concrete, and the laying of coal sidings at the Eastern Docks. Eight freight sidings also came into use alongside the Hawkesbury Street Curve, at Bulwark Street, partially upon the former site of the SER’s Dover Town engine shed. A dock basin for the train ferry, fed by a double-track emanating from the Dover Priory route, came into use during 1936, to the north of the Marine terminus. 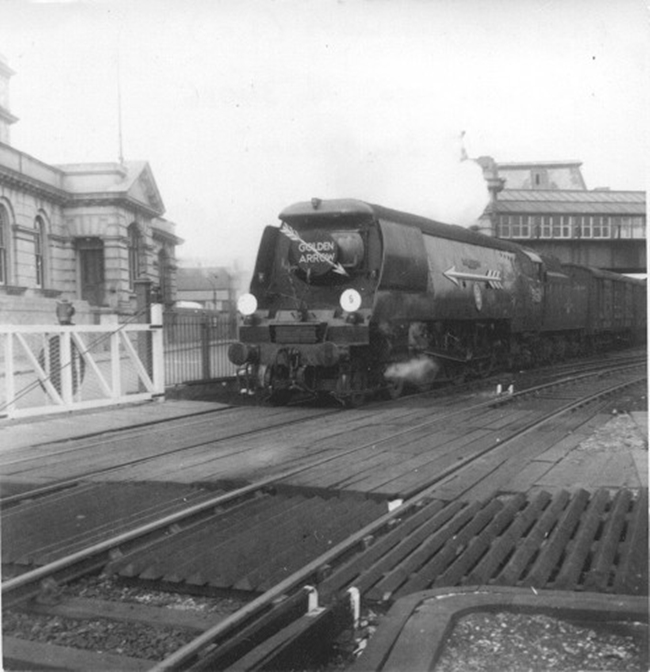 Bulleid Light Pacific No. 34086 ''219 Squadron'' departs Dover Marine with the famous ''Golden Arrow'', upon the southern side of what was once a triangular junction. At this time, No. 34086 was allocated to Stewarts Lane (73A), but this shed was soon to lose its steam locomotive fleet as a result of electrification. No. 34086 subsequently went to the South Western Division at Nine Elms, where it remained until withdrawal in June 1966. The Late Brian Relf, courtesy and © of Colin Relf 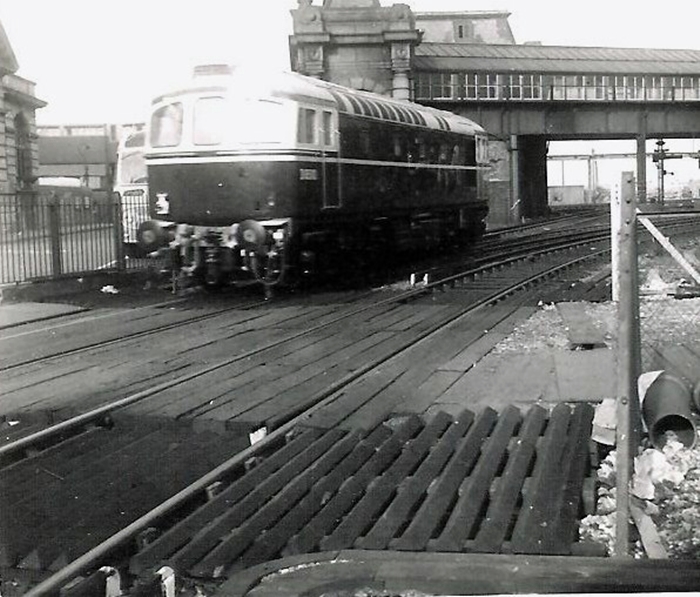 Type 3 diesel No. D6510 is seen passing over the level crossing west of Marine station, light engine. To the left of the locomotive, in the background, can just be seen the riveted steel footbridge which had only just been erected as part of the electrification works. No. D6510 ended its operational days as Class 33 No. 33010 in April 1988. The Late Brian Relf, courtesy and © of Colin Relf 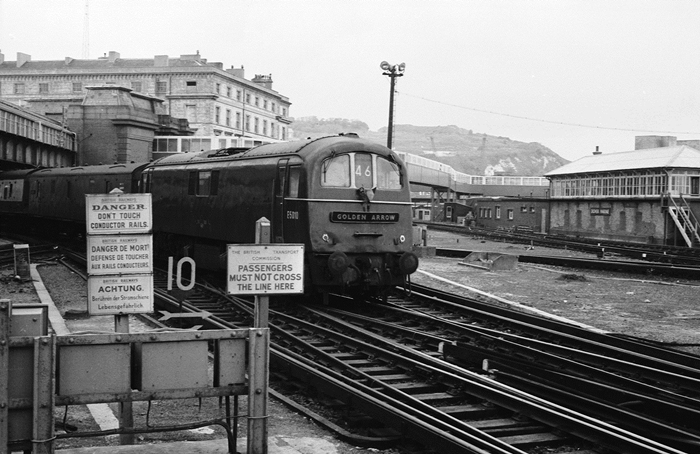 Type ''HA'' No. E5010 (latterly Class 71 No. 71010) is seen gliding into Dover Marine with the famous ''Golden Arrow''. On the right can be seen the huge SE&CR signal box, which opened with the station with a frame of 120 levers. Formally closed on 5th July 1995, the signal box survived in the capacity of offices, until it was demolished in 2000. © David Glasspool Collection