The town’s first permanent station was that of Folkestone Junction, which came into use with the completion of the Foord Viaduct on 18th December 1843 (acquiring the ‘’Junction’’ suffix in 1852, despite the harbour branch having been opened in 1849). The third station to come on the scene was that of Shorncliffe Camp, positioned about a mile to the west of the viaduct and opening to traffic on 1st November 1863. As the name suggests, its raison d’etre was to serve a nearby military base, which had been established in 1794. By this time, the SER’s policy of providing ‘’economical’’ station structures was in full swing and thus, the passenger facilities provided here were fairly basic. Two platform faces were situated either side of a double track, the ‘’up’’ side being host to a single-storey clapboard structure, a feature which became very common on the SER’s network. Interestingly, this was devoid of any form of canopy, just like the virtually identical building at Yalding, therefore any passengers standing on the platform surface were completed exposed to the elements. The ‘’down’’ side fared better in terms of weather protection, even if it did lack a station structure: a triangular canopy, roughly the length of the counterpart clapboard building, featured. This demonstrated a simple, but nevertheless pleasing valance pattern, a more or less identical example of which can still be seen on the canopies at Plumstead. Exactly one month after opening, the station received a name alteration: ‘’Shorncliffe Camp’’ became ‘’Shorncliffe & Sandgate’’. This was short-lived and the original name subsequently came back into use on 1st October 1874.

There was no goods yard here as such, but refuge sidings were instead available. That on the ‘’down’’ side was the largest, being three times the length of the platform and effectively making the latter an island, having been arranged as a loop. The siding on the ‘’up’’ side was westward-facing and terminated immediately beside the station building. The modest goods provision was, however, to be drastically improved upon with the planning of a whole new station layout. An enlarged replacement complex opened on 1st February 1881, some 150 yards to the east of the existing station. The whole nature of its construction differed totally from the SER’s earlier attempt: two through platform faces were now separated by four tracks, which allowed the non-stop services - such as the boat traffic - to overtake slow trains. Each platform was graced with an indistinguishable single-storey red brick building, demonstrating the same design traits which featured in the examples at Ashford, such as semi-circular window frames. The general construction of the Shorncliffe Camp buildings was fairly straightforward - in fact, they could be considered as glorified brick versions of the SER’s clapboard products, for they were designed around the same rectangular base, were of similar height, and had identically-shaped pitched roofs. Copious and elaborate canopies were used on both platforms, to a design which later became standard on the quadrupled section of line from Hither Green to Orpington. Both platforms were flanked on the outer edges of their western ends by goods sidings. The main yard was situated behind the ‘’up’’ platform, eventually comprising six sidings, whilst two tracks were a feature of the ‘’down’’ side, one of which was a bay line and the other served by a ‘’dock’’ platform face. The bay probably came into use with the Elham Valley Line in 1887 (more of later). At the eastern end of the ‘’up’’ platform was an additional carriage ‘’dock’’ line, adding to an already interesting array of tracks. The yard lacked a traditional goods shed building, which would usually have a single-track intercepting it: instead, the original clapboard structure of the first station was reused as the yard’s offices. Another curious feature of the goods yard was a short-lived connection with a branch line: this, some 1500 yards long, trailed off from the third ‘’up’’ siding in a south easterly direction. It linked the SER line with an Arts Treasures Exhibition taking part in the town, allowing supplies to be taken directly to the site. Opened in 1886 and approved for passenger operation in June of that year, it closed swiftly afterwards, with the ending of the exhibition.

Since opening, the enlarged station layout had been controlled by a SER-designed timber signal box, positioned at the western end of the ‘’up’’ platform and comprising fifty-four levers. This was supplemented by a four-lever ground frame and two sets of individually controlled points. The cabin also had control over the single-track connections with two external sites: a petrol store on the ‘’up’’ side and an electricity generating station on the ‘’down’’ side. A second SER-designed signal box came into use just over a mile to the west of Shorncliffe Camp, at Cheriton Junction on 4th July 1887, with the Elham Valley Line. As a consequence of this branch opening (initially to as far as Barham), the ‘’down’’ passing loop at Shorncliffe Camp was extended westwards to the junction, providing an additional ‘’slow’’ line to create a triple-track section.

The standard layout before the sidings were taken out of use and platforms altered as a result of the Kent Coast Electrification; click to enlarge. Scale is approximate. © David Glasspool 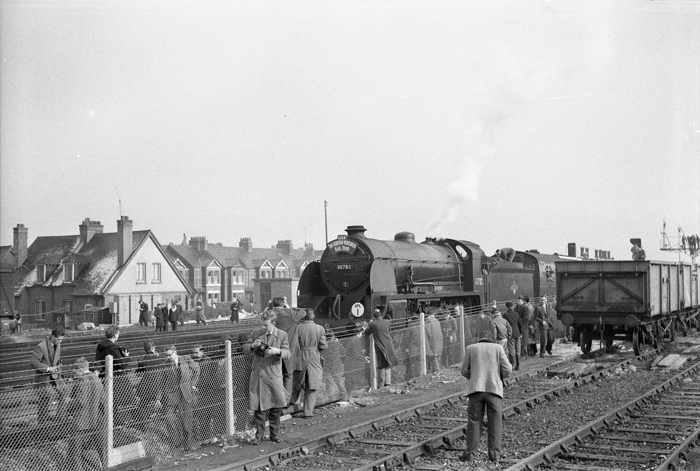 The Locomotive Club of Great Britain's "The Kentish Venturer Rail Tour" is seen during a brief stop at Shorncliffe, fronted by N15 Class No. 30782 "Sir Brian". The tour had come from Victoria via Chatham and Ramsgate; the next stop was Ashford, for a trip down to Appledore and New Romney. In the foreground are the sidings of the "up" side goods yard. In the background, on the far right, can be seen the then recently decommissioned semaphore gantry, whilst just to its left is a replacement colour light signal. © David Glasspool Collection 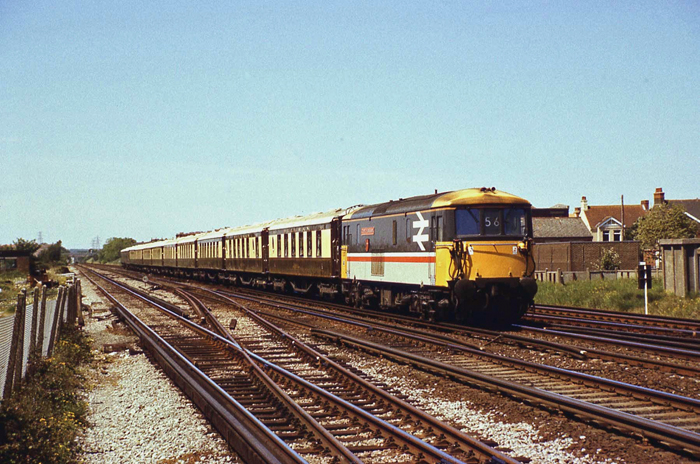 Seen approaching Folkestone West on the four track section from Cheriton Jn is No. 73207 "County of East Sussex", hauling the 1100 (1Z40) Victoria to Folkestone Harbour "Venice Simplon Orient Express" Pullman train. Originally numbered E6029 when built in 1966 at the English Electric Vulcan Foundry, the loco subsequently became No. 73122 under the TOPS renumbering scheme, then after further modification in 1988 it was re-numbered to 73207 as part of the small class 73/2 fleet based at Stewarts Lane Depot and used for Gatwick Express services. Remarkably, after withdrawal in 2001, the loco was purchased by GB Railfreight and returned to mainline use in 2009. Even more remarkable for a fifty year old loco, it is being rebuilt by Wabtec at Loughborough and will re-emerge with a more powerful engine as No. 73971 for use hauling sleeper services in Scotland. © David Morgan 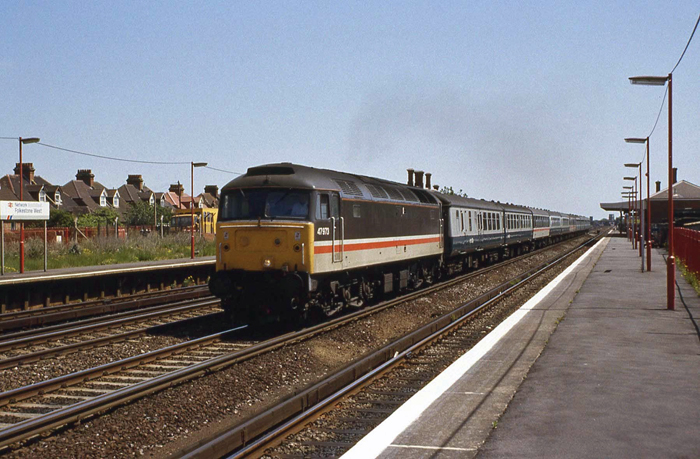 Based at Crewe Diesel Depot and allocated for use by Derby Railway Technical Centre, No. 47973 has escaped test train duties for the weekend and is seen passing through Folkestone West with the 1210 (5Z36) Folkestone Central to Ashford ECS, which had arrived as an excursion from Nottingham. © David Morgan 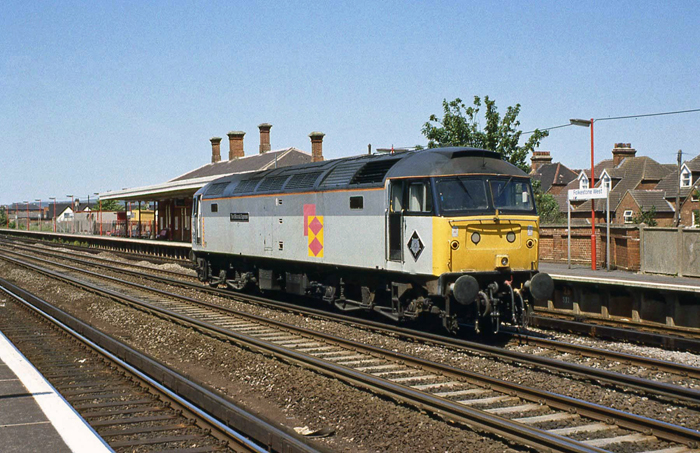 No. 47231 "The Silcock Express", operated by Railfreight Distribution and based at Tinsley Depot, is seen passing through Folkestone West on the "Down" Fast Line en route to Dover Town Yard. This loco, built in 1965 by Brush Traction at Loughborough, was rebuilt in 1999 and currently (2015) running as 57010, still remains in use as part of the Direct Rail Services fleet based at Carlisle. © David Morgan 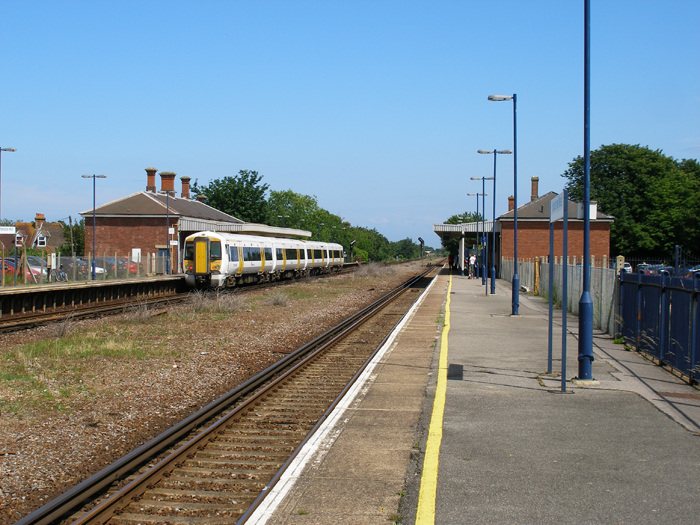 The advent of the Channel Tunnel, resulting in the closure of Dover Western Docks station and the adjacent Town Yard, virtually eliminated freight traffic from this section of the line. Rationalisation occurred at both Folkestone Central and West stations, both losing two tracks, the former also seeing an island platform abolished. Electrostar No. 375915 arrived at platform 2 with a Charing Cross to Dover Priory service, the absence of the through tracks being obvious. © David Glasspool