The first proposed line to Hastings was that of the ''Brighton, Lewes & Hastings Railway'' (BL&HR), which received Royal Assent on 29th July 1844. The line was to be 32-miles 50-chains in length, and at its eastern end terminate within the Parish of St Mary, Bulverhithe, Sussex, 3-miles west of Hastings. The independent concern was authorised to raise a capital of £425,000 (£34,400,000 at 2008 prices), and to take out £140,000 (11,300,000 at 2008 prices) in loans. In 1845, the BL&HR was permitted to extend their line from Bulverhithe to Ashford, a distance of 29-miles 7-chains, where a junction with the SER would be made. Authorised capital was £500,000 (£40,300,000 at 2008 prices), in addition to loans of £166,000 (£13,400,000 at 2008 prices), and the project was known as the ‘’Hastings, Rye & Ashford Extension’’. Indeed, it was at this time that the small company was absorbed by the London & Brighton Railway, which set alarm bells ringing at the South Eastern Railway. Consequently, the latter countered the proposals, putting forward an alternative line to Hastings from the Weald of Kent trunk route at Headcorn, by way of Tenterden. This Bill was defeated, but Parliament decreed that the Ashford Extension would be better built by the SER, and powers for the line’s construction were formally transferred to the company from the L&BR on 21st August 1845.

The L&BR’s progress was swift, and on 8th June 1846 a double-track line between Brighton and Lewes was opened to scheduled services. This was followed by the commissioning of the remaining stretch to Bulverhithe, this time single-track, on 27th of the same month, terminating at ‘’Hastings & St Leonard’s’’ station (latterly St Leonards West Marina). Conversely, SER construction was slow, and although the Ashford to Hastings line followed the natural level across Romney Marsh, steep gradients were encountered at either end of the route. Of the original Ashford Extension which transferred to the SER, the L&BR retained a 1-mile 30-chain section of the proposed route as their own, this being the stretch westwards from their station at St Leonard’s. Earthworks at the western end of the SER line were heavy, and a tunnel at Ore was made in preference to a large cutting, which would have averaged a depth of 55-feet. The tunnel was bore to a length of 1042-yards, 418-yards-longer than originally proposed, but again extended to eliminate a cutting. As part of the Extension Act, the LB&SCR (formed by amalgamation of London & Brighton and London & Croydon Railways on 27th July 1846) was entitled to serve the Hastings station of the SER. Thus, the former could use the booking offices, sheds, warehouses, carriage docks, approaches, and all other conveniences, without any payment being made to the latter. On 10th October 1850, the SER should have forwarded plans for their proposed Hastings station to the LB&SCR, detailing arrangements at the new site. Perhaps out of spite to their rival, the company failed to do this, and after a second request to have the plans ready for the LB&SCR by 26th of the same month, still nothing appeared.

Captain Wynne of the Royal Engineers and Mr Hood of the Board of Trade inspected the SER’s Hastings station site on 28th December 1850. It was found that the station was ‘’entirely incomplete’’, and the arrangements on the ground were such that they were inconvenient and insufficient to handle traffic of either LB&SCR or SER companies singly. It was suggested that the Directors of the former should protest against the opening of the SER line until some definite understanding between the two companies was reached, and the Hastings station brought to a state whereby traffic could be worked with convenience and regularity.

On 23rd January 1851, G. S. Herbert, Secretary of the SER, reported that the Hastings to Ashford line was ready for opening, after receiving word from the company’s engineer, Peter W. Barlow. Recommendations and requirements earlier made by Captain Wynne had been seen to. Captain Wynne inspected Hastings station again on 30th of the same month, and it was ‘’found that the permanent way was completed, the signals up, and the electric telegraph laid down.’’ Unfortunately, the line could still not be recommended for opening, since the SER had made unauthorised changes to the position of signals between St Leonards Tunnel and Bopeep. A final inspection took place on 10th February 1851, and Captain Wynne was met at Hastings station by the Chairman and Engineer of the LB&SCR, and the Chairman, Engineer, and Superintendent of the SER. This visit revealed that the signalling between St Leonards Tunnel and Bopeep had been modified satisfactorily. From St Leonards to Rye, the double-track was completed, but thence to Ashford, just one of the tracks was ready, although the second line was said to be at an advanced state. Thus, it was recommended that the Ashford to Hastings line be opened between St Leonards and Rye as a double-track route, and thence to Ashford as a single-track line. Additional regulations were submitted by the Board of Trade in light of public safety, to ensure that two engines were prevented from proceeding along the same section of single-track in different directions at the same time. This would be facilitated by the installation of electric telegraph throughout on the line. Regular traffic finally commenced between Ashford and Hastings on 13th February 1851.

In the meantime, the SER had started building a direct line to Hastings, avoiding the detour via Ashford. This route robbed the Ashford Extension of much importance early on, and began life as a 4-mile 1-chain-long branch line from Tunbridge (latterly ‘’Tonbridge’’) to Tunbridge Wells. The line acquired Royal Assent on 31st July 1845, and was engineered throughout by Peter W. Barlow of the SER. Earthworks for the line were substantial, and although originally authorised as a single-track line, the decision to upgrade the route to double-track was made mid-way through construction. Agreed capital for the branch’s construction was £180,000 (£14,500,000 at 2008 prices), in addition to taking out loans amounting to £60,000 (£4,840,000 at 2008 prices). On 18th June 1846, a natural southward extension of the branch from Tunbridge Wells to Hastings was authorised, a distance of 25¾-miles. A capital of £640,000 (£46,200,000 at 2008 prices) could be raised, and £213,000 (£15,400,000 at 2008 prices) taken out in loans. The extension would cut the London to Hastings distance by 50-miles. ‘’Messrs Hoof & Son’’ were awarded a £50,000 contract (£4,047,300 at 2008 prices) to build the Tunbridge to Tunbridge Wells section of line, which featured heavy earthworks, two tunnels, and a 26-arch viaduct. Regular traffic along the branch commenced on 20th September 1845, trains initially terminating at a temporary terminus at ‘’Jackwood Spring’’, 4-miles 7-chains south of the junction with the main line at Tunbridge. Extension of services through the 823-yard-long ''Wells Tunnel'', to a permanent site, occurred on 25th November 1846.

Southwards from Tunbridge Wells to Robertsbridge, line construction was subcontracted to H. Warden, and this section came into use to regular traffic on 1st September 1851. Extension of services to Battle followed on 1st January 1852 and, finally, to Hastings, on 1st February of the same year. Unfortunately for the SER, problems with the then new Hastings direct line soon began to surface. It emerged that the building contractors had failed to line tunnel bores along the route with enough brick layers. In March 1855 the bore of Mountfield Tunnel, between Robertsbridge and Battle, began to disintegrate, when 12-feet of brickwork fell down. Grove Hill and Strawberry Hill Tunnels, between Tunbridge Wells and Frant, were quickly inspected and were also found with insufficient brick layers. A court case saw the SER awarded £3500 in damages (£237,000 at 2008 prices), but it cost the company £4700 to remedy the errors (£319,000 at 2008 prices). This involved adding further layers of brick to the linings of the tunnels, reducing height and width by 9-inches and 18-inches respectively. Naturally, this imposed a highly restrictive loading gauge on the route thereafter.

Track plan of Hastings station as rebuilt by the Southern Railway in 1931. Click the above for a larger version. 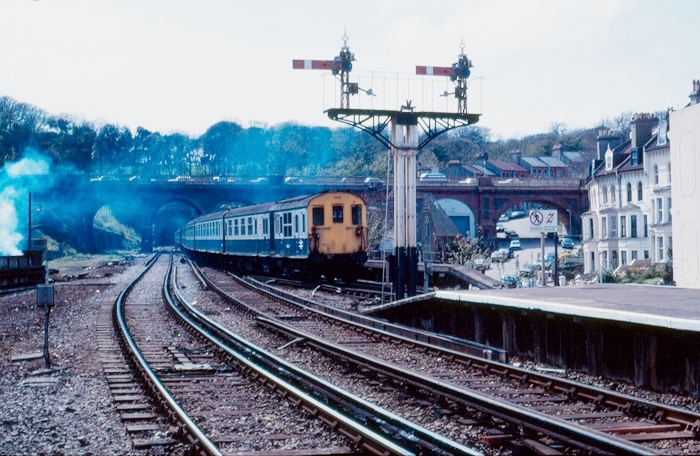 Eight days before the start of the full electric timetable via Tunbridge Wells, ''Hastings'' DEMU No. 1018 is seen

arriving at its namesake with unit No. 1016 at the rear. In the background is the 788-yard-long Hastings Tunnel.

The vacant track bed on the left, through the bridge arch, was once host to a pair of sidings. The semaphore signals

in view were gone by 1990. © David Glasspool Collection 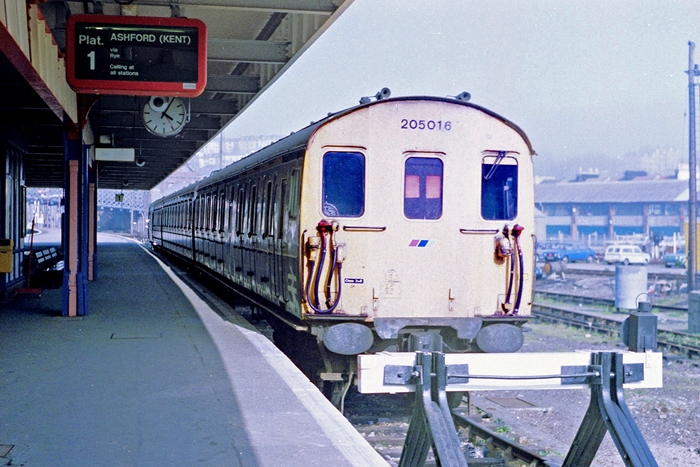 with an all-stations stopping service to Ashford. This is the platform which was converted to a bay in early

1986 to provide level access between the main station building and platform Nos. 1 and 2. On the right can

be seen the sidings of the goods yard. Treflyn-Lloyd Roberts 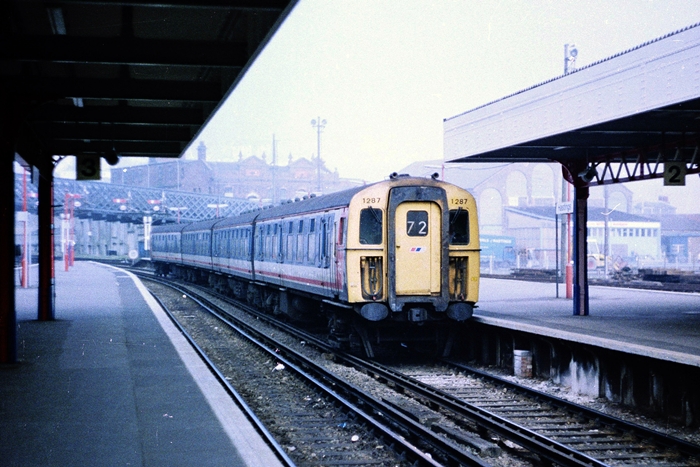 A splendid array of semaphore signals are in evidence in the background, as 4 CIG No. 1287 enters platform

2 with what appears to be an Ore to Eastbourne service. After the closure of Ore carriage shed in May 1986,

most Central Division services which once served Ore were cut back to Hastings. Track lifting is in evidence

on the right, on the site of the goods yard. Treflyn-Lloyd Roberts