The first Hastings station was a peculiar affair, comprising just two platform faces. One of these was a through affair, dedicated to SER traffic from both Tunbridge Wells and Ashford routes, and was positioned south of the running lines. It extended for about 360-feet and was protected by a 200-foot-long canopy. The latter was typically SER, demonstrating a splendid clover-patterned timber valance and a flat roof. The second platform served a westward-facing terminal line and was used by LB&SCR trains only. The dimensions of this platform and that of the canopy were identical to that of the SER surface. This arrangement created an unusual V-shaped station, situated within the fork of the diverging SER and LB&SCR platform lines. Within the gap between the two platform surfaces was provided a huge main building, the nature of the site requiring it to be triangular in shape. The station’s architect was the SER’s own William Tress, who produced at Hastings what can only be described as a giant version of the main building still in existence at Rye. Red brick construction was used throughout, frescoed at the edges with stone, and a trio of hipped slated roofs were incorporated. Located within a restricted site on the side of a valley, the lack of platforms at the station meant that quite spacious locomotive facilities could be provided. Five tracks separated the SER platform face from a triple-track engine shed. The latter was 150-feet-long by 50-feet-wide, constructed of brick throughout and, in accordance with the Hastings, Rye & Ashford Extension Act, was shared by both SER and LB&SCR companies. The three tracks entered the building from the east, and the centre road passed through the shed to reach a 45-foot turntable immediately to the west. Strictly speaking, the layout allowed for trains heading to London to leave in either direction; for the sake of this section, ‘’up’’ trains are regarded as those heading towards St Leonards.

Goods facilities were well accommodated for south of the running lines, immediately east of the station forecourt. The goods shed, although hosting just a single-track, was nearly as substantial as the engine shed: again of brick construction, it measured 105-feet in length by 50-feet in width and featured a slated pitched roof. To the structure’s rear could be found a pair of small wagon turntables (one of which survived right up until the station’s rebuilding by the Southern Railway), one of which fed off the goods shed track. Finally, east of the goods shed could be found a trio of Ashford-facing sidings, one of which served a separate platform used for handling cattle. The layout was controlled by two small SER timber signal boxes: the first was located 60-yards beyond the western ends of the converging platform faces, on the ‘’up’’ side of the line; the second, again on the ‘’up’’ side of the running lines, was positioned 740-yards east of the station.

As Hastings evolved into a popular Victorian seaside resort, the station’s two platforms soon became inadequate to handle seasonal traffic. In 1880, the SER announced an enlargement scheme, which would produce two more platform faces and a bigger goods yard. A new terminal surface of two platform faces came into use alongside the existing LB&SCR platform line, upon the former site of three rolling stock sidings. The new platform surface was of concrete construction and lacked any form of canopy or shelter. Again, just a single through platform was retained for SER services. The goods yard was re-laid to produce seven lengthy Ashford-facing sidings, excluding that which passed through the goods shed. The railway now served a timber merchant which had been established alongside the goods yard’s eastern perimeter. A rail connection was also made with an adjacent gas works, located on the ‘’down’’ side of the running lines, beyond the road bridge at the Ashford end of the layout. During the works, the diminutive wagon turntables behind the goods shed were retained. Furthermore, north of the engine shed, a siding was extended into a loop which, in effect, provided a station avoiding line. At the St Leonards end of the station, two westward-facing sidings were commissioned on the ‘’up’’ side of the line; on the ‘’down’’ side, a third siding and head shunt were laid. The revised layout was re-signalled jointly by the SER and contractor ‘’Stevens & Sons’’. The latter erected a timber cabin, virtually identical in design to that still in existence at Grain Crossing, upon stilts, straddling the northern-most siding of the goods yard. The SER erected a new cabin at the western end of the layout, again on the ‘’up’’ side as per its predecessor, but immediately alongside the divergence of SER and LB&SCR platform lines. This signal box was typically SER in appearance, comprising a brick base, clapboard upper half, sash-style windows, and a hipped slated roof. The SER and Stevens & Sons cabins became ‘’West Yard Box’’ and ‘’East Box’’ respectively.

The strange V-shaped station survived into Southern Railway ownership, and this company made its own enhancements to the existing layout in 1926. These included the provision of a second turntable, 55-foot in diameter, and a coal stage on the ‘’down’’ side of the line, just before the portal of the 788-yard-long Hastings Tunnel. Naturally, this was a prelude to complete rebuilding, for in 1930 demolition of the existing SER station commenced. The locomotive allocation was switched to the former Brighton Depot at St Leonards, and the engine shed site at Hastings cleared to make way for a new four-platform station. Two islands, over 800-feet-long and made from Exmouth Junction prefabricated concrete, emerged, complete with run-in name boards of the same material. These were each host to a W-shaped canopy, 300-feet-long, which sported a plain riveted steel valance. Indeed, these were built to a standardised outline, similar examples appearing at the rebuilt Tonbridge and Swanley stations – however, the canopies at these stations featured plain timber valances. William Tress’ main building was razed to the ground, but the legacy of the V-shaped arrangement would live on in the new layout. A replacement station building was erected directly upon the site of the ex-LB&SCR terminal platforms, resting at the same angle as its predecessor. A Neo-Georgian design by architect J. R. Scott, it was of red brick construction and comprised stone lining on its upper edges. As per the earlier main buildings erected at Margate and Ramsgate, a spacious booking hall formed the centrepiece of the design, flanked by offices either side. Two footbridges were brought into use: the first was a fully enclosed glazed affair, 100-feet-long, which emerged through the western ends of the canopies and linked both islands with the main station building. The second footbridge, again roofed but without glazing, was also positioned at the western ends of the platforms. This lacked staircases, instead being equipped with lifts, and linked both islands with the new main building.

A revised goods layout with an increased number of sidings emerged on the existing site of the SE&CR yard, and the brick goods shed of the SER was demolished. The latter was replaced with a much larger affair, of corrugated metal construction, which could accommodate a double-track. The yard included a dock platform which butted onto the main station building and, interestingly, was host to a short W-shaped canopy, as per the main islands. The SR’s aforementioned modifications of 1926, at the portal of Hastings Tunnel, remained unaltered, but the entire layout was re-signalled. This led to the abolition of both West Yard and East Signal Boxes; thereafter, the station was controlled from a single cabin erected at the Ashford ends of the platforms, on the northern side of the rails. Mostly brick-built with a slated pitched roof, it comprised an 84-lever Westinghouse frame, and an identical cabin had earlier come into use at the new Ramsgate station in 1926. Whilst East Box totally disappeared, the timber portion of West Yard Box in fact survived: it was craned off its brick base, lowered onto the ground behind, and became part of a line of mess huts. The new station was formally deemed complete on 5th July 1931. 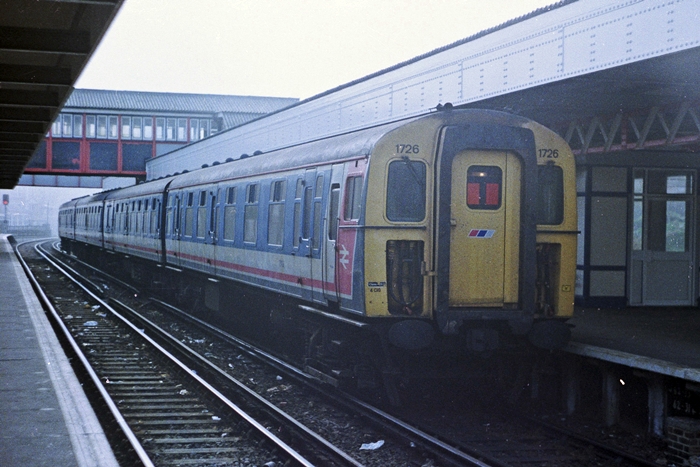 Both footbridges can just be glimpsed in this view of 4 CIG No. 1726 at platform 3. The first is the fully enclosed

footbridge which linked the main building and islands through flights of steps. Just behind is the second footbridge,

which lacked staircases and was equipped only with lifts. Also visible is the riveted steel pattern of the canopy 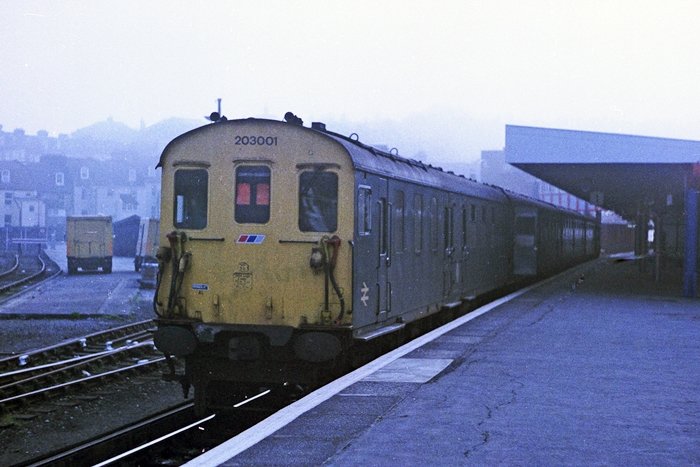 Although ''Hastings'' DEMUs largely disappeared from the station after electrification via Tunbridge Wells,

short-formed set No. 203001 survived for a short time on the Ashford service. It is seen here in the bay

platform, after arrival from Ashford, wearing a hybrid livery of BR Green, complete with BR Roundels,

after which it was converted into a ''sandite''. It was finally scrapped in 1996. Treflyn-Lloyd Roberts 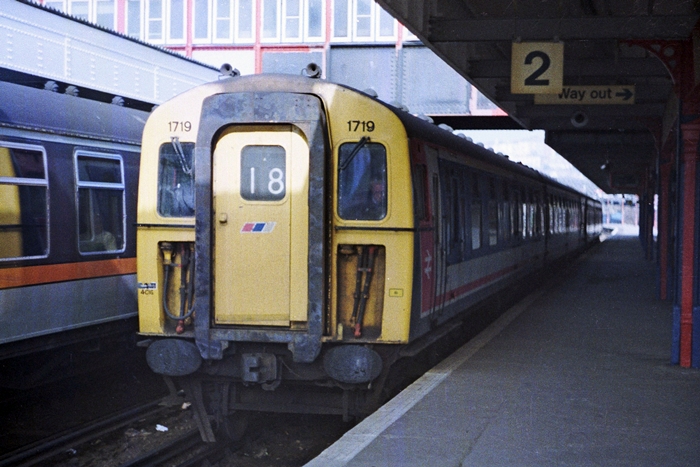 4 CIG No. 1719 is seen at platform 2 with a Central Division service to Brighton. On the left can just be seen

the distinctive ''Jaffa Cake'' livery on a 4 CEP: this became synonymous with the ''1066'' branded 4 CEP units

deployed on the Tonbridge to Hastings line at the time of electrification. Treflyn-Lloyd Roberts