The branch to Sheerness was one of the East Kent Railway's (EKR) early expansion concepts, which aimed to delve deep into supposedly potential SER territory. The origins of the project can be traced back to a time before the EKR had even opened its first stretch of operational railway between Faversham and Chatham. In 1856, another independent concern known as the ''Sittingbourne & Sheerness Company'' had been formed to complete a seven-mile single-track line between its namesake locations. This was a recurring theme throughout the history of Kent's railways: the larger companies generally built the main lines, whilst smaller, local concerns instigated the development of branch lines fanning from the trunk routes. The branch from Sittingbourne to Sheerness opened to passenger traffic on 19th July 1860 - the LC&DR (renamed from EKR in 1859) would not initiate through running to Victoria until 3rd December of the same year. As expected, the LC&DR ran the services on the line from the outset, although the branch remained the property of the smaller Sittingbourne & Sheerness Company until this itself was absorbed by the former in 1866.

On opening, the branch only had one intermediate station, that of ''Queenborough'', and the line terminated at a ''Sheerness'' station which was to the west of the present terminus. The name ''Queenborough'' derives from the wife of King Edward III, Queen Phillippa. Queenborough became a point of considerable strategic importance on two occasions, but first it is worth examining the station itself before looking at the lines which branched from it. The impressive station building here is very untypical of the basic intermediate stops found on the LC&DR main line; this is quite simply because its design and construction were undertaken by the line's aforementioned builder. Distinct parallels can be made between the main building and a counterpart in Hampshire: opened by the ''Lymington Railway Company'' on 12th July 1858, Lymington Town station could be passed off as a Sittingbourne & Sheerness creation and indeed, it dates from the very same era. Lymington Town's pitched roof and window frame designs replicate those found at Queenborough - all it lacks is the overall building symmetry. The two structures are, in fact, related. Both the Lymington and Sittingbourne & Sheerness Railways employed the same engineer to oversee their construction; this was one John Cass Birkinshaw. Whilst succeeding in Hampshire, he was not so fortunate on Sheppey, the railway company's directors blaming him for the line's slow rate of construction. He was subsequently sacked, being replaced by T.E. Marsh, but his influence on the route remains enshrined in Queenborough's station building.

At Queenborough, two platforms were in evidence, the single track splitting into a loop. The ornate structure of the ''down'' side was not repeated on the ''up'' platform, a timber waiting shelter instead being suffice here. No footbridge was present on the station's opening, a track foot crossing at the London end of the platforms instead being used until provision of the former was made in the latter years of the LC&DR's existence. Good facilities here were conservative: just a single northward facing siding was in evidence from the outset, this being positioned on the ‘’down’’ side. This terminated within a pitched roof goods shed, located just to the north of the platform. Circa 1875, a Stevens & Sons-designed signal box was erected just to the north of the ‘’up’’ platform, to control the aforementioned layout. This was a somewhat tall timber affair, three-storeys high, which later received a protective brick base. The height of the cabin appears to result from the need to see beyond the over bridge at the southern end of the platforms: the loop converges back into a single-track beyond this, thus the tall cabin afforded the signalman an unobstructed view of the points beyond the structure.

It was on 15th May 1876 that Queenborough became a junction, the line to Sheerness itself sprouting a branch of its own. The short spur terminated on the edge of the coastline, a station named ''Queenborough Pier'' being provided there. The short branch to the pier station owed its existence to the ''Zealand Shipping Company'', which the LC&DR had hitherto been serving the steam ship passenger traffic of at Ramsgate. The two companies reached a mutual agreement to transfer terminal facilities from the latter, to the Isle of Sheppey. Consequently, this led to the rival SER instigating the independent ''Hundred of Hoo Railway Company'' to build a branch from the North Kent Line (Hoo Junction), to the Isle of Grain, where it opened rival facilities at Port Victoria. It was not all plain sailing for the LC&DR at the Port of Queenborough, however, and in 1882 the pier station was destroyed by a catastrophic fire, forcing Zealand Shipping services to Flushing to temporarily transfer to Dover, during which time the pier was rebuilt. To coin a well-known phrase, ''things come in threes'' - this was certainly the case for the pier station, which had hit a string of bad luck. The second disaster to occur was that in 1887, which saw floods on the Sheerness branch line prevent trains from reaching the pier, followed by an even more destructive occurrence in 1900: a second devastating fire. The LC&DR and SER had amalgamated into the SE&CR the previous year, thus whilst the pier station was again rebuilt, shipping services were simply transferred over the mouth of the Medway to Port Victoria. The rebuilt station remained open only until November 1914, World War I seeing the complete cessation of shipping traffic to the continent, and it did not re-open to regular passenger traffic again. The shipping services were subsequently re-instated at Harwich in Essex after the war and the spur to the pier station remained open until 1956, as a lightly used goods branch. 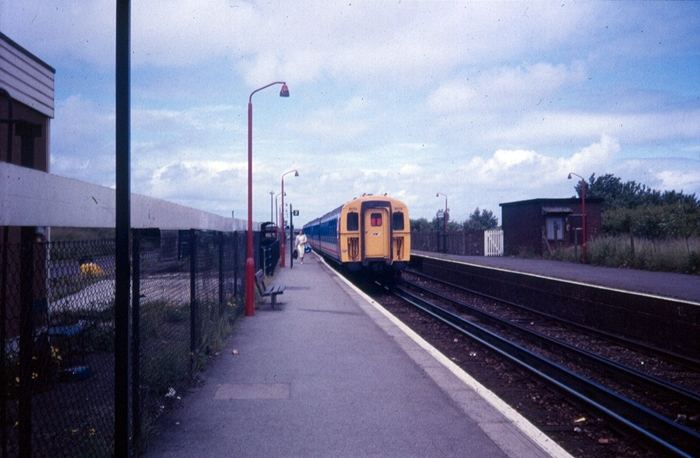 4 VEP No. 3172, in ex-works condition, is seen departing for Sheerness-on-Sea, forming the shuttle service

from Sittingbourne. Behind the fence on the left is the former goods yard. © David Glasspool Collection 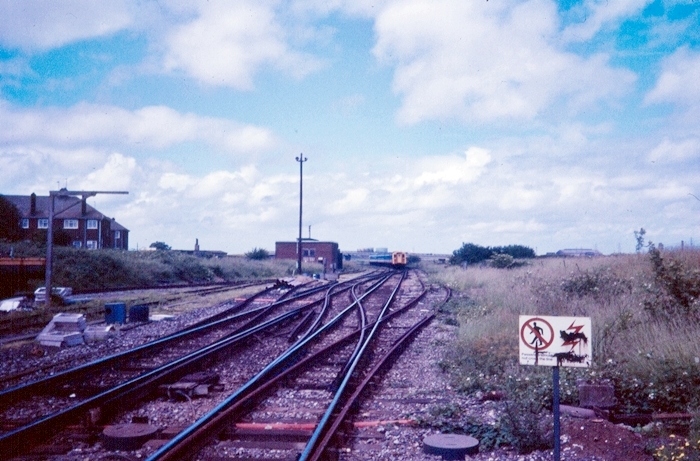 A three-way turnout and, on the left, the remains of the goods yard (complete with loading gauge post) are

evident in this northward view. 4 VEP No. 3172 can be seen returning from Sheerness-on-Sea, and in the 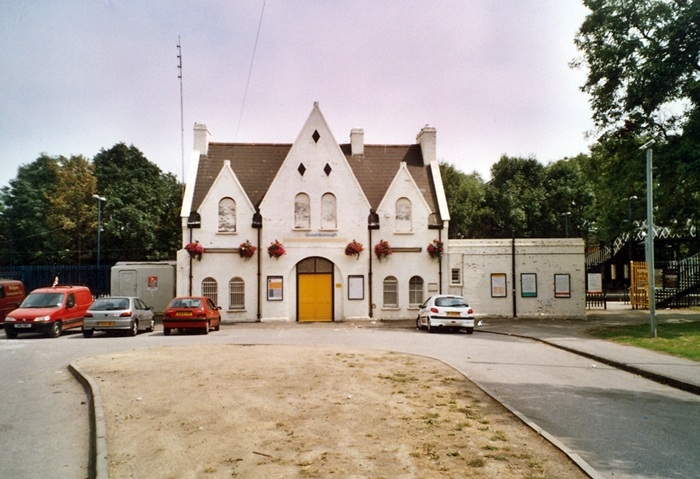 A fine building, but in need of a makeover. All upper windows have been boarded up and the lower windows

have had bars installed. The grey portacabin immediately on the left stands on the former site of the station

the right was formerly graced with a pitched roof, similar to that to its immediate left. It would be nice to see

this building returned to its former glory. © David Glasspool