The outbreak of World War I at the end of June 1914 saw the SE&CR’s Thanet modernisation plans grind to a halt. Despite improvements at Margate West, and the proposal to connect both former LC&DR and SER routes, no further work was undertaken. Even after 1918, the company did not resume the task – by this time, the SE&CR lacked adequate finance to modernise its railway network and operations. Indeed, where the LB&SCR and LSWR were electrifying their suburban lines, the SE&CR continued to rely wholly on steam haulage, being unable to afford the capital cost of electrification. It was left to the January 1923-formed Southern Railway to finish the work which the erstwhile SE&CR had started. Rationalising the Thanet lines had become even more important by this time, for bus and coach services had begun to appear in great number. In June 1925, the SR pressed ahead with the task, by starting the construction of a double-track loop, 1⅜-mile in length, to link the ex-SER and ex-LC&DR lines. The loop commenced ⅞-mile south of Broadstairs, where the existing Ramsgate Harbour line plunged into a 1630-yard-long tunnel, descending at a gradient of 1 in 75. The ex-SER route was met by the loop line on the approaches to the terminus of Ramsgate Town; here, a completely new and comprehensive Ramsgate station was built on the land formerly occupied by the triangular junction between the Town station and the aforementioned bypass spur of 1863. A second station was destined to open on the loop line, at Dumpton Park, and new structures were to come into use at Broadstairs.

Although considerable enlargement of Margate West had occurred under SE&CR auspices, as far as the SR was concerned, this work was only half complete. Consequently, additional works at the West station commenced with the demolition of the original ‘’down’’ side main building of 1863, leaving the example at Herne Bay as the only of its kind. Construction work was subcontracted by the SR to builders ‘’Rice & Son’’, and an imposing replacement building was erected behind the ‘’down’’ platform. This was an impressive symmetrical affair, measuring 265-feet in length and being two-storeys in height. The structure was constituted of brown brick, lined with stone, and a light and airy booking hall, measuring 45-feet across by 65-feet down, came into use. A slated pitched roof was in evidence, and above the main semi-circular window of the booking hall’s northern elevation, ‘’SOUTHERN RAILWAY’’ was engraved into the stonework. Attached to the building’s southern elevation was an upward-sloping platform canopy, which came complete with an intricate valance matching the pattern of those earlier examples installed by the SE&CR before the Great War. The southern-most platform surface became host to a single-storey 55-foot long waiting room, which demonstrated a slated pyramid-shaped roof, and was constituted from the same brown brick as the main building. Platforms were equipped with ‘’Target’’ style name signs, and the main run-in name boards were supported upon concrete struts. A new design of platform lamp came into use, which saw each wrought-iron post sprout two lights either side.

The West station’s engine and goods sheds, which dated from the opening of the extension from Herne Bay in 1863, were abolished, as was the single dock line. Their sites were used for the building of a parcels depot, and demolition of these structures also permitted the creation of a larger station forecourt. The parcels depot comprised its own platform face and canopy, and was fed by a single westward-facing track, the latter of which provided a direct connection to both ‘’up’’ and ‘’down’’ running lines. The abolition of the engine shed came in response to the decision to centre Thanet’s locomotive allocation at a much larger depot at the new Ramsgate station. Engine shed closures also occurred at Deal and Ramsgate Town – the station at the latter was to be wholly swept away, its site soon becoming host to housing. Nevertheless, the SR incorporated locomotive stabling facilities at Margate: in-between the ‘’up’’ bay platform and the five rolling stock sidings, a 59-foot 9-inch turntable was installed, which, like its predecessor, was fed by two tracks. Flanking the pair of turntable approach lines was a water tower (to the immediate north) and a coal stage (to the immediate south). The former was a rudimentary affair, comprising a small pitched-roof water tank suspended upon a tall steel framework. Note should also be made of the water tower of 1863 origin, which had been built behind the ‘’down’’ platform and survived both 1913 and 1925 station revisions.

The majority of alterations were deemed formally complete on 2nd July 1926, on the opening of the 1⅜-mile-long Dumpton Park Loop; Margate West simply became ‘’Margate’’. Closures of Margate Sands, Ramsgate Town, and Ramsgate Harbour stations ensued – redevelopment of the ex-SER route swiftly followed. The entire stretch of ex-SER line between Ramsgate Town and Margate Sands stations was closed. The site of the ex-SER Margate terminus became host to a large open-air car park, but not all of this route’s course was dispensed with. Approximately ⅞-mile of the track bed, immediately south of the high-level ex-LC&DR line, was retained for the building of a new goods yard layout, to replace the freight facilities lost at the West station during the 1925 works. A wide embankment was created upon the former SER route at this site, to house a 300-foot-long pitched-roof goods shed and seven generously spaced southward-facing sidings. One of these tracks passed through the goods shed building, whilst another served a 390-foot-long row of coal staithes. The goods yard could only be accessed by means of a headshunt manoeuvre, and a completely new single-track connecting line, approximately 640 yards in length, was brought into use, linking the ex-LC&DR through route with the ex-SER track bed. The connection between the running lines and the goods yard’s headshunt was brought round on a descending embankment, and to control the new junction here, the SR commissioned Margate’s second signal box. This was built in sympathy with the earlier commissioned SE&CR cabin of 1913, demonstrating design traits of those earlier Saxby & Farmer products erected prior to 1900. The SE&CR structure became ‘’A’’ Box, being the closest of the pair to London, whilst the SR cabin was designated ‘’B’’ Box. 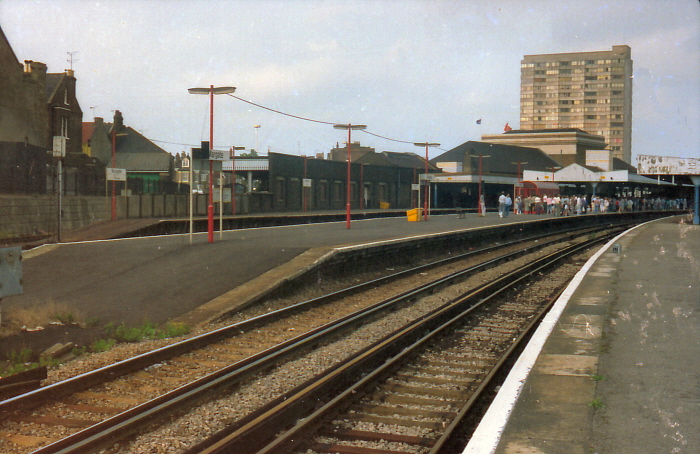 A north easterly view reveals the intricate canopy valance of the parcels dock platform, which survived being simplified or wholly abolished during 1970s rationalisation. Upon the island platform can be seen one of the glazed bus shelters of Network SouthEast, installed in the previous year. The reason for the crowd of people on the platform becomes clear in the next view. © John Horton 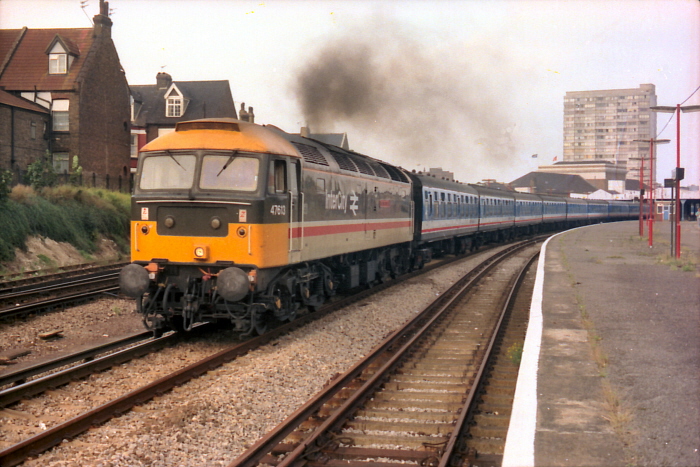 Class 47 No. 47613 ''North Star'' is seen roaring out of Margate with a mixture of BR Mk 1 and BR Mk 2a Network SouthEast coaching stock. The train is the return leg of an excursion from Oxford to Canterbury West. © John Horton 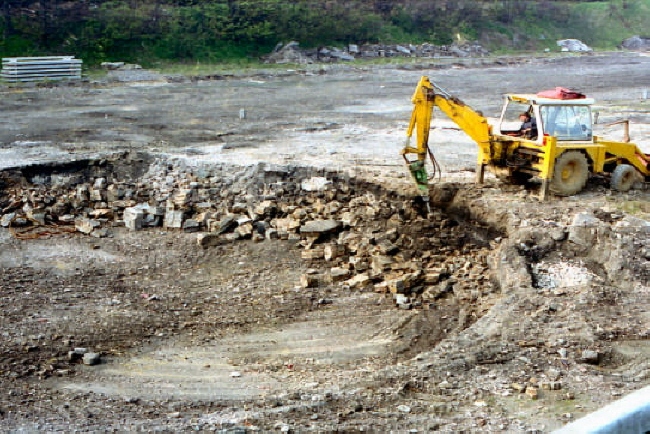 When redevelopment of the site to the south of the platforms began, the turntable pit re-emerged. After the turntable was removed, the pit effectively became a landfill site for burnt ash and rubbish from the trains. When the unsuspecting JCB driver passed over the site, his vehicle sunk! © John Horton 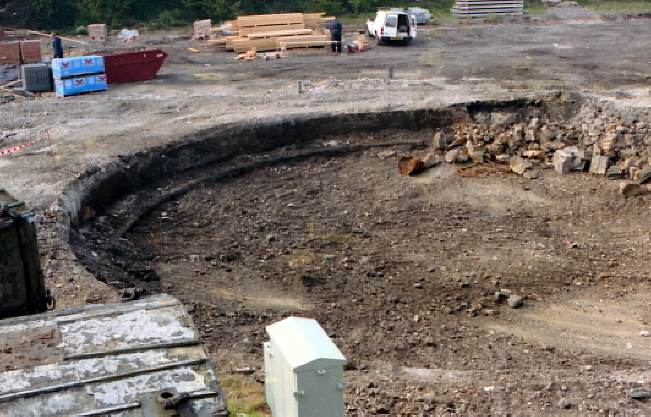 In this second view, taken from the platform lift shaft, the turntable circumference running rail can be seen. The 59-foot 9-inch turntable replaced the smaller LC&DR 45-foot example on the modernisation of the station over 1925/1926. © John Horton