A Network Rail Route Utilisation Strategy, published in January 2010, suggested that significant benefits had been identified for the relocation of Rochester station. The new site was later identified as a council car park, 500-yards to the north of the existing station, and the move would be an integrated part of Phase 2 of the East Kent Re-signalling Scheme. With reference to the latter, this was to see extension of the North Kent Operations Centre's scope to the Medway Towns and the Medway Valley line, resulting in the closure of "power boxes" at Rochester, Rainham, and Sittingbourne, in addition to those mechanical cabins between Strood and Paddock Wood.

The car park occupied an area of 1⅓-acres, of which the proposed station would occupy the southern 0.3 acres, eliminating 103 car parking spaces in the process. The following were argued as advantages of providing a new station:

The cost of the relocation scheme was estimated to be between £26,000,000 and £28,000,000, a proportion of which accounted for Network Rail partially funding a new car park to compensate for lost spaces. A formal planning application was submitted to the council for the works in spring 2013 and this was approved in September of the same year.

Early signs of construction work were witnessed in November 2013, when temporary fencing was erected around that section of the railway embankment earmarked for the new station. This was quickly followed by vegetation clearance. Major engineering works commenced the following year: a four-day closure of the line between Sole Street and Gillingham was enacted from 02:00 on Friday 18th April 2014 to 03:30 on Tuesday 22nd April 2014. On 18th April, 185-yards north of the signal box, a gap of about 30-feet was cut into the railway embankment. This was in order to accommodate a huge concrete box, which was to provide an underpass link between the town and riverside. The box was moved into position by attaching to it a series of nitrogen-filled jacks, allowing the concrete colossus to be pushed into position upon a cushion of air.

The platforms here were to be three in number (two of these forming an island) and extend to over 800-feet-long to accommodate twelve-car trains. Indeed, part of the reasoning for replacing the existing station with a new site was the fact that the platforms there, at 675-feet long, could accommodate ten-car trains at most, and any extension would have required heavy engineering works. The supports for the island platform at the new site started to emerge in summer 2014, made from a combination of grey brick and reinforced concrete, and concrete decking had been laid upon these by November. A single-span bridge was laid parallel with the existing alignment immediately south of the signal box, to accommodate the track which was to feed platform 3 of the new station. The main station building's foundations were begun in February 2015.

Progress on the re-signalling scheme has not been as smooth as planned, which has impacted the works on the new station. Rochester signal box should have been demolished in April 2015, to allow the laying of a new track to feed the outer face of the island platform. This has been delayed and the signal box is still required, which means that initially, the "down" loop will be a northward-facing siding. Other heavy works which will not be finished until the new year include a large multi-storey car park on the eastern side of the line, which started to take shape in November 2015. This is scheduled to open in April 2016.

The old Rochester station saw its last passenger train in the early hours of 12th December 2015. The station, however, was still considered open for the rest of the day and into the early hours of the 13th, given that it was a calling point for the rail replacement bus service. The first train scheduled to call at the new station when it opened on 13th December 2015 was the 17:21 departure to London Victoria (ex-Dover Priory and Herne Bay), followed by the reverse working departing at 17:26. The first London St Pancras International service leaving the new station was timed for a 17:28 departure, followed by a Charing Cross train (ex-Gillingham) at 17:31. 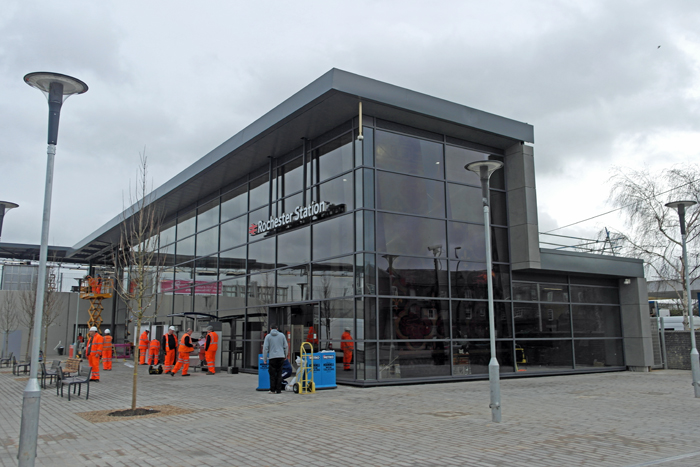 The forecourt of the new station was a hive of activity as preparations were made for the station's opening the following day. A rail replacement bus service was in place at this time, the previous station having seen its last train in the early hours of the morning. © David Glasspool 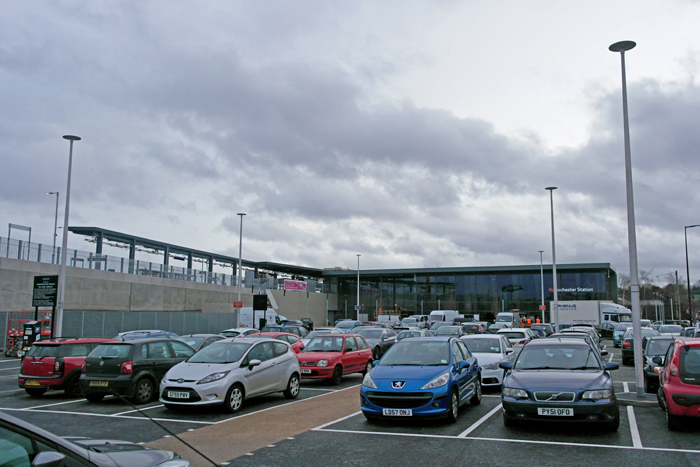 The renewed car park along Corporation Street, in front of the new station, was already open - three weeks prior to this photograph, this area was still part of the general construction site. © David Glasspool 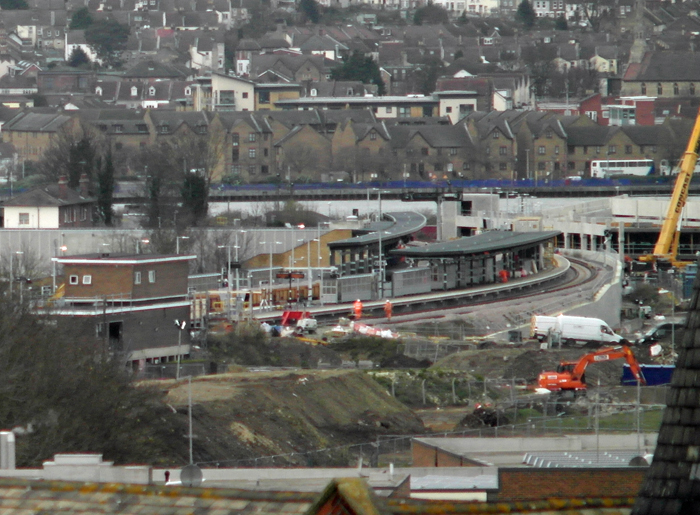 A northward view shows the full extent of the new station, which comprises three platform faces, two of which form an island. The presence of the signal box of 1959 origin, on the left, prevents the use of the outer platform face of the island from the outset, given that it sits on part of the new track alignment. A sizeable multi-storey car park is under construction on the right-hand side. © David Glasspool 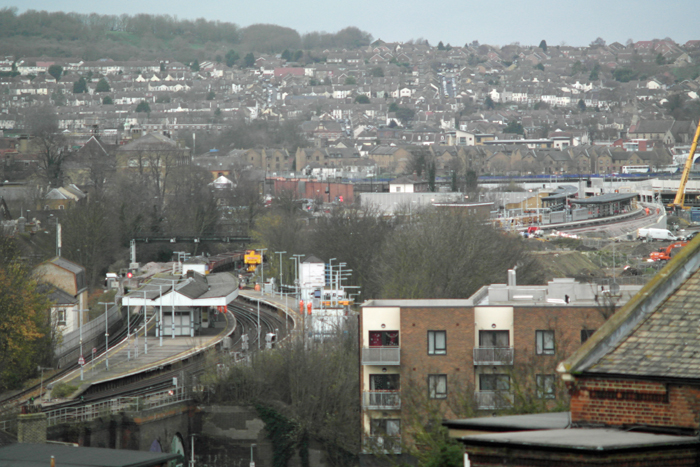 The old and the new. The previous station had seen its last passenger train in the early hours of the morning, but remained as a calling point on this day for the rail replacement bus service. © David Glasspool